The Top 10 Reasons I Love Volcanoes (And You Should, Too) 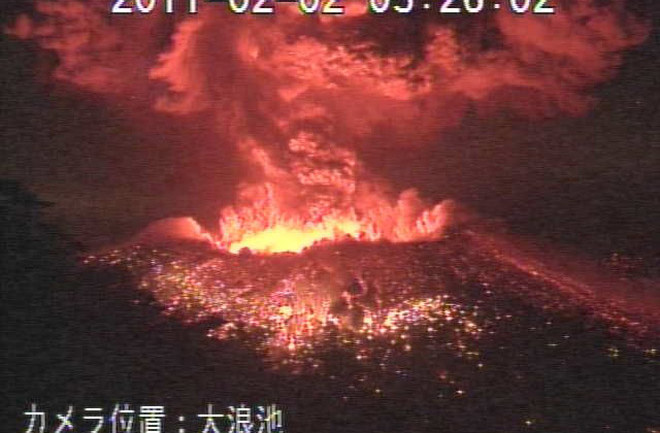 If you are a frequent reader of the blog and/or follow my @eruptionsblog Twitter feed, you might have found that in a very Danish sort of way, I have of late, but wherefore I know not, lost all my mirth. I feel like I've been spending a lot of text raining on people's parades when it comes to mongering about volcanism or criticizing the way volcanoes are covered in the media. Now, those are two goals of this blog - to dispel the rumors and wrong ideas that abound in the interwebs (and beyond), but really, it isn't much fun. Sure, I am satisfied when I've really nailed why the Daily Mail just set back volcanic understanding a decade, but that really isn't why I got started here. Eruptions got started because, well, I love volcanoes. It is what I do for a living - think, research and teach about volcanoes. So, to remind myself (and you) why I love volcanoes, I thought I'd post about it. So here goes. Erik's top 10 reasons why I love volcanoes: 10. They erupt molten rock. In a sense, this speaks for itself. What person of any age isn't impressed with taking something as seemingly permanent as rock and having it come out of the ground molten. Sometimes it comes out as lava flows, glowing orange (or black sometimes, like carbonatites) and sometimes there is just too much gas trapped in the lava, so it fragments into ash particles that get carried into the atmosphere. All of it starts of as molten rock formed sometimes as deep as the Earth's mantle. 9. They've captured the imagination of man since, well, forever. The oldest known depiction of a volcanic event made by humans is ~8,200 years old. How many things, short of downing that impressive mastodon, have captivated the minds of humans? Some of the earliest works of antiquity were about volcanoes, however stylized, and the some of the Gods even lived inside volcanoes. Some volcanoes are still considered sacred landscape, like Japan's Fuji (see below). Remember, the modern humans came out of a volcanically-active valley where evidence of their activity was captured in ash beds from these volcanoes - we've watched them erupt for millennia.

8. Volcanic features might have been the cradle of life itself on Earth. Hydrothermal vents on the seafloor related to submarine volcanism could be one of the places that life first emerged on Earth. The heat from the magma and the dissolved ions, like metals and sulfur, could have been some of the first nutrients consumed by early organisms - so without active volcanism on Earth, life might have never had a chance. 7. Volcanoes are highly destructive on both small and large scale, but also make the land more fertile. Volcanoes sometimes get a very bad name because of the destructive potential of their activity - pyroclastic flows, lahars, ash and more - but even though they can wreak havoc on local, regional and global scales, volcanoes are also one of the main sources of fertility in many soils. The breakdown as ash from volcanoes helps plants grow so well in many parts of the world as they return elements to the soil that plants need. 6. Crystals found in lava can tell you about thousands (or more) years of magmatism under a volcano. This is why I love studying volcanoes so much - the history that is recorded in a single crystal. You pick up almost any volcanic rock (except maybe obsidian) and you'll find crystals. They might be hard to see, but they are there and each of them records some piece of the history of that volcano. Some might be a snapshot of the last few days or hours before they erupts while some might have 350,000 years of recycling under the volcano recorded in their growth (see below). Unraveling that history is what keeps me interested - the "message in a bottle" found in every volcanic deposit.

5. Volcanoes are found all over the solar system. Look around you. Earth is only one of many bodies in the solar system that has active volcanism - Venus, Mars, Io, Enceladus, Titan, Triton and possibly more have some form of volcanism. Sure, it might not all be molten silicate rock erupting, but it is volcanism never the less - one of the constants across the solar system and likely across the universe. 4. You can find evidence of eruptions in every corner of the world. Volcanic eruptions can one of the few truly global events. When the eruption is large enough, ash and aerosols like sulfur dioxide get spread into the atmosphere. The ash might settle out first, but there are still many examples of ash from eruptions being an identifiable layer thousands of kilometers away from the eruption itself (that is why they can be so useful as age horizons in the rock record). The aerosols can spread much, much further, circling the globe in a few weeks and leaving their record in the ice at the poles. Sulfur dioxide spikes in the ice cores from either pole record eruptions occurring all over the planet, showing that no where is out of reach of some volcanic effect. 3. A single volcanic eruption can stop modern society in its tracks. This might come in the form of just memorizing us with footage or tales of an eruption - think about the rediscovery of the ruins of Pompeii near Vesuvius or it might really bring society to its knees like the eruption of Eyjafjallajökull (see below). We have been lucky that there hasn't been a truly globally-destructive eruption during modern human history (I'm talking the last few hundred years), but we've had some close calls - but imagine the ramifications of a large-scale eruption from a volcano like Rainier in Washington or another large eruption from Vesuvius. They could be game changers for many, many people.

2. Volcanoes helped forge the Earth - the land itself, the oceans and the atmosphere. Back at #8 I mentioned that volcanoes could be the cradle of life. Well, that might be an understatement because without volcanism, we likely wouldn't have the oceans or the atmosphere as we know it today. The volcanoes of Earth helped liberate all the water and other volatile elements/compounds trapped within the Earth in the form of eruptions or other plumes to form the atmosphere. Heck, the entirety of the land surface today started out as volcanic products that have since been recycled to form sedimentary and metamorphic rocks, but when it comes down to it, we'll all volcanic (or plutonic) in the end. 1. They erupt molten rock! Did I mention that? Just look at any video of Kilauea erupting - all that glorious lava - and you had me at "pahoehoe".