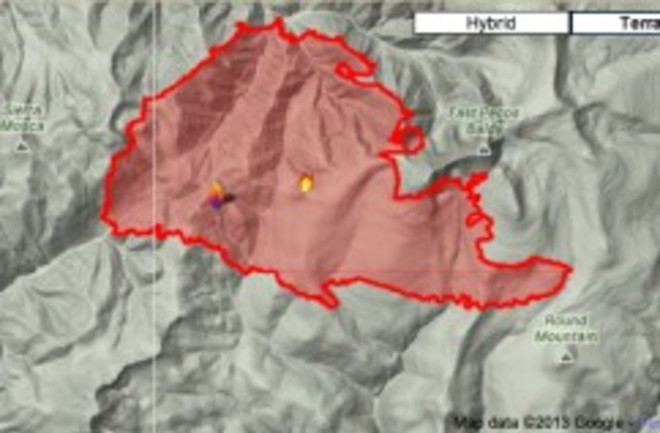 Jaroso Fire in the Pecos Wilderness of New Mexico. Google Maps. As I read Ray Monk’s new biography of Robert Oppenheimer, which I reviewed for the forthcoming issue of the New York Times Book Review, the parts that affected me most deeply were about northern New Mexico. I’d long known the story of Oppenheimer and Los Alamos, the secret atomic city he presided over in the Jemez Mountains. But it was on the opposite side of the Rio Grande Valley, in the Sangre de Cristo range, that he fell in love with the wild beauty of this land. He was 18 years old. He had grown up in luxury on the Gold Coast of Manhattan’s Upper Westside. From the Oppenheimers’ apartment atop a building on Riverside Drive, they could admire the sunsets over the Hudson River, and the van Goghs and the Renoir that hung on the walls. Holidays were spent at a mansion on Long Island and sailing on the family yacht. The boy's life changed when, before he left for Harvard, his parents arranged for him to spend the summer of 1922 in New Mexico. His stay began in Albuquerque, at the home of his friend Francis Fergusson, a classmate at New York’s Ethical Culture School. The Fergussons lived in an adobe hacienda, La Glorieta -- as grand, in its own way, as the Oppenheimer’s place in New York. He soon met Francis’s friend Paul Horgan, the novelist and historian, and became infatuated (it was apparently unrequited) with Katherine Chaves, the daughter of one of the most prominent of New Mexico’s old families. The Chaveses had a guest ranch, Los Pinos, in the Sangre de Cristos, near the headwaters of the Pecos River and the village of Cowles. Oppenheimer learned to ride a horse there, and on a trip high among the tall pines and aspens, he came upon a jewel of a lake he named Lake Katherine. It is one of my favorite spots on Earth. Oppenheimer and his brother, Frank, later bought their own ranch near Los Pinos. Oppenheimer named it Perro Caliente. Hot Dog. As I write this in my office down the mountain in Santa Fe, that beautiful green land is on fire, another casualty of a drought that won't end. My eyes sting from the smoke, and the evening light has taken on a dark filtered glow. There is an orange ring around the moon. In the last day, the Jaroso fire, which started more than two weeks ago in the Pecos, has mushroomed and now covers nearly 10,000 acres, or 15 square miles. Another 10,000 acres burned earlier this month in the Tres Lagunas fire. Last Sunday, the final day before all of the forests were closed to people, a friend and I hiked from the Santa Fe ski basin up Raven’s Ridge to Deception Peak. Standing above the timberline at 12,300 feet, we could look north beyond Lake Katherine to the plume from Jaroso. Closer in and to the west was the 10,000-acre scar left two years ago by the Pacheco Canyon fire. It was followed days later in the Jemez mountains by the Las Conchas fire -- 156,000-acres, an order of magnitude greater than any seen here before. It came right to the top of the ridgeline overlooking Los Alamos. It might have continued down into the city, but that side of the mountain had already burned back in 2000, in the 48,000-acre Cerro Grande fire. This year is the driest yet, or ever, and what Las Conchas left unburned in 2011 has been fuel in recent weeks for the 24,000-acre Thompson Ridge fire. We've almost come to expect these things in the Jemez, which are lower and drier than the Sangre de Cristos and packed with explosive Ponderosa pines. Now even the high, cool meadows of the Pecos are under threat. Fire involves such a simple chemical reaction: oxidation -- the transfer of electrons from the shell of one atom to another. There is nothing nuclear happening -- no protons or neutrons giving up the bottomless energy they hold deep in the atomic well. No E=MC^2. Just the nicking of the surface of atoms and all of this horror pours out. According to this evening’s reports, crews are scouting out the area north of Cowles, near Perro Caliente, in case the fire swings south and defense lines have to be cut through the trees. This weekend predictions call for a 10 percent chance of a thunderstorm. But it will probably bring more lightning than rain. More damned electrons.