The Sun blows its top — again

SEE ALSO: Has the Sun blown its top?

Ordinarily, the Sun's magnetic field lines extend up through the atmosphere, or corona, and then loop back down to the surface. This bottles up solar particles near the surface, where they heat up and glow. But sometimes, magnetic field lines extend up and out into space without reconnecting to the surface. Here, the opening in the magnetic field allows particles to blow out into space. Wherever this happens, the surface becomes darker and cooler, giving the impression of a hole in the Sun. I created the animation above to illustrate this process. It consists of SDO images of the Sun captured in different wavelengths. The red image shows the Sun at a wavelength of 304 Ångströms. Looking at the Sun in this wavelength reveals light emitted from a layer, called the chromosphere, just above the visible surface of the Sun that we're familiar with. No hole is visible because this wavelength doesn't reveal features in the Sun's corona very well. The next image in the sequence, captured at a wavelength of 171 Ångströms, begins to reveal some features in the corona. In this gold-colored image, you can begin to make out the coronal hole — just barely. The two images that follow show the sun at wavelengths of 193 and 211 Ångstöms respectively, which are very good for seeing features in in the hot outer reaches of the corona. In these images, the coronal hole is very obvious — as it is in the next image, which is a combination of the two. In the final image of the sequence, a modeled map of the Sun's magnetic field lines is laid over the combination image. Here, magnetic field lines are seen arcing upward from active regions on the Sun and then reconnecting with the surface. But over the Sun's north polar cap, the lines shoot straight out . Here, solar material blows out into space, creating the dark, coronal hole. Astronauts aboard Skylab, the first U.S. space station, were the first to discover the coronal hole phenomenon, back in the early 1970s. Here's what they discovered using an x-ray telescope on board: 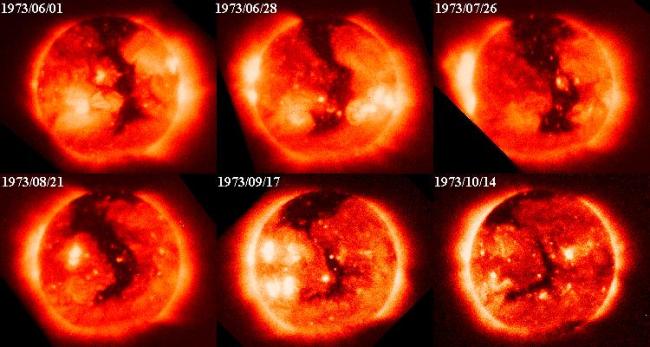 The first coronal hole ever observed on the Sun, photographed by astronauts aboard the Skylab space station in the early 1970s. (Source: NASA Marshall Space Flight Center) For a primer on why scientists view the Sun in different wavelengths, check out this post from NASA's Goddard Spaceflight Center.