The Stunning Experience of a Total Solar Eclipse 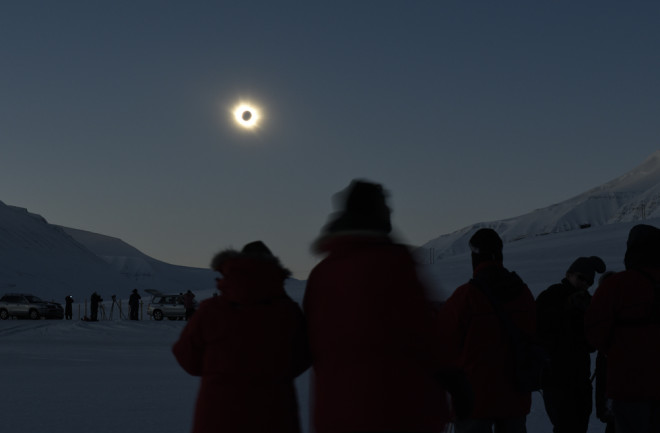 The eclipse as seen from the group’s viewing site outside Longyearbyen. Photo by Valerie Hwang

In a word, this morning’s solar eclipse was perfect.

As part of Discover‘s partnership with TravelQuest International, I’ve been here in snowy Svalbard for the last few days — an amazing journey full of reindeer, answering questions and snow.

And now, my first-ever solar eclipse.

We had to get up early to catch an 8 a.m. bus (many of us still jet-lagged) and it was ridiculously cold (-4 degrees Fahrenheit, down to -13 during totality, when things got dark), but even still, the eclipse was just perfect from our site about 4 miles south of Longyearbyen. It looked like someone had Photoshopped the sky to make it look brighter, crisper, and more surreal than should be possible in real life. And, as I hear is always the case, it was over much too quickly.

Even seasoned eclipse-chasers, folks who have eight or 10 or more under their belt, all said this year’s Svalbard eclipse will be the one to beat. The conditions were superb. The air was crystal clear, so the sun and moon’s edges were sharp lines, making the famous “diamond ring” patterns appear bright and razor-edged. The extreme northern latitude (our observing site was above 78° N) meant the sun hung low in the sky, framing it perfectly in a gap in the mountains and even adding the illusion of greater size that occurs when the moon or sun are near the horizon.

And with the east and west directions being almost entirely snowy plains, we could see not just the approaching darkness, but also the elusive shadow bands rippling on the flat white ground.

The eclipse as seen from a group’s viewing site outside Longyearbyen. (Credit: Allen Hwang)

The Experience of Totality

The sun did its part too. Its delicate corona literally took our breath away during totality, when the moon’s face fully covered the sun’s and we finally experienced the unique sensation of being in the moon’s shadow. The sun also dazzled with a solar prominence in the midst of totality, large enough to be visible with bare eyes. I didn’t even know such a thing was possible!

But before we knew it, the almost 2.5-minute totality was over. Everyone was shocked at how soon the moon moved off the sun’s face, taking a smaller and smaller bite out of the sun until it was gone, like nothing even happened. We were sad to see the moment end, but it had been such a perfect one that no one could begrudge its passing.

Even now, hours later, the crowd is still happily abuzz with the perfect eclipse, and how lucky we all were to see such a pristine example of one of the sky’s most famous shows.

My role here as one of the tour astronomers has been to help all the people in our group (almost 400 in total, the biggest single tour group ever to visit Svalbard) appreciate and prepare for the eclipse. For the most part that involves answering questions and looking to make sure no one’s being unsafe, both in terms of eye safety with the sun and cold safety outdoors.

And though this morning was surely the highlight of our trip, we still have another day and a half left in Svalbard, where we can keep trying for glimpses of aurora and other fun arctic adventures. Stay tuned for those updates.