The frequent impact of meteorites on the moon's surface churns the soil and affects where future explorers could find deposits of lunar ice. 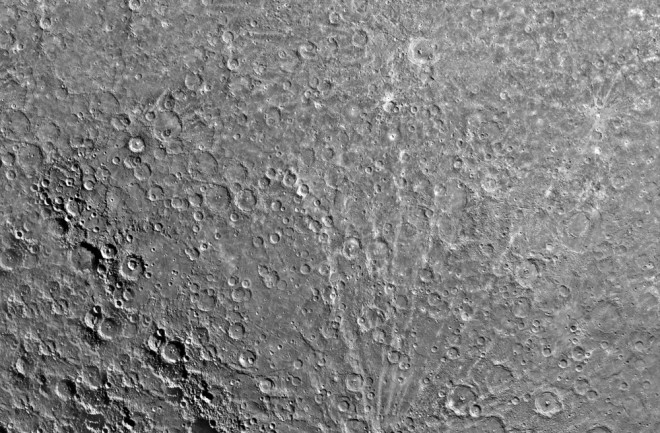 Near the moon’s poles, crater walls block sunlight from reaching some areas of the surface. In these permanently shadowed regions, temperatures are ghastly cold, which could allow water to exist in the form of ice. But on an airless body like the moon, the constant barrage of meteorites that punch into the soil could mean that near-surface ice is short-lived and thicker deposits of ice are buried deeper.

The moon’s tenuous atmosphere provides little-to-zero protection against meteorite strikes. Instead of burning up, space rocks strike the surface with a lot of energy due to how fast they travel — about 12 miles per second. The impacts create craters and mix layers of soil in a process known as impact gardening.

The impacts also propel debris into the air that falls back and hits the surface. These secondary impacts churn the soil, too. It takes about 100,000 years to thoroughly mix the top centimeter of soil, and about 1 billion years for the top meter, says Emily Costello, a planetary scientist at the University of Hawaiʻi at Mānoa.

In a recent study, Costello and a team of researchers found that these impacts are very important when it comes to mixing. “Secondary impacts are the only way we can explain the mixing we see in the uppermost meter of the moon from the Apollo cores,” Costello says.

Permanently shadowed regions near the poles are cold enough to trap ice that could have been deposited by ancient volcanic outgassing, cometary impacts and reactions between the lunar soil and the solar wind.

In addition to the cold-traps in large, deep craters, there are many more, smaller cold-traps in shallower craters, says Paul Hayne, a planetary scientist at the University of Colorado Boulder.

In a study in Nature Astronomy last year, Hayne and a team of researchers showed that there are many of these micro-cold-traps. “The most common cold-traps are probably about the size of a quarter,” he says.

The ice in cold-traps would be affected by impact gardening, too. Meteorites strike with enough energy to vaporize ice on or near the surface and impact gardening can excavate or bury the ice. In the new study, Costello and a team of researchers found that secondary impacts churn material to the surface faster than they bury it. This means there is a greater chance that ice deposits would have been lost to space rather than being shielded from further impacts and erosion from the solar wind and ultraviolet radiation.

The possibility of accessing water from cold-traps could help future explorers survive and spend longer periods on the Moon’s surface. The question is: Where will the ice turn up?

“We’re likely not going to find thick, coherent deposits of ice in the uppermost few meters of the average cold-trap because impact gardening would have pummelled it to bits, if not removed it altogether,” says Costello.

There is the possibility, however, that some cold-traps could contain relatively young near-surface ice because it takes time for gardening and erosion to happen. There could also be sites where gardening has shielded ice with dirt.

The large, deep craters potentially hold the greatest deposits of ice, but the smaller cold-traps are promising, too. “Micro-cold-traps are expected to be much more accessible to future explorers compared to the vast, frigid, shadowed areas inside large craters,” says Hayne.

In any case, the effects of impact gardening suggest that substantial deposits of ice could be buried deeper below the surface. “It’s likely that future missions will find this water-rich dirt, if they are able to dig down that far,” Hayne says.