The Search for Aliens Gets Harder—But More Encouraging

Saturn's surprising moons have broadened scientists' ideas about where extraterrestrial life might be found. 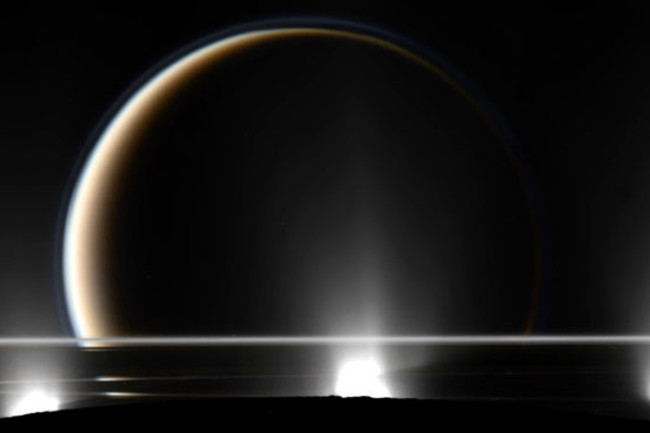 Among Saturn’s substantial posse of moons—61 have been discovered so far—two particularly odd ones are capturing the imagination of planetary scientists. A torrent of findings has shown that giant Titan (3,200 miles wide, larger than the planet Mercury) and tiny Enceladus (just one-tenth as big) are worlds of unexpected complexity, placing them among the most promising extraterrestrial sites in our solar system to look for prebiotic chemistry or even for life itself. Research in the past several months has further fueled the excitement, yielding new hints of liquid water on Enceladus and revealing ethane lakes and methane rain on Titan.

In 2005, while exploring the Saturn system, the Cassini spacecraft made a startling discovery: Cryovolcanoes on Enceladus were spewing jets of water vapor and ice into space, possibly from a liquid water source beneath the surface. This past July researchers examining data from Cassini’s mass spectrometer announced that the icy debris contains ammonia, a potent antifreeze that could keep water in a liquid state even at the deep-freeze temperatures (–136 degrees Fahrenheit) measured near the vents. A month earlier, astronomers in Germany and the U.K. reported that sodium salts make up as much as 2 percent of the ice grains in the jets. Such a high salt concentration suggests the presence of a buried reservoir of liquid water. (Long-frozen ice would include little sodium, but a lingering underground lake would turn salty from dissolved minerals, just as the oceans have on Earth.)

Until the early 1980s, scientists viewed Enceladus as a frigid, dead world. Then the Voyager probes revealed that it has a geologically active surface and that it orbits amid the densest part of Saturn’s outermost ring. That evidence led two researchers to propose that surface vents on Enceladus expel liquid water from below the crust, supplying debris for the ring. Nearly 30 years later, their hypothesis—then deemed highly speculative —looks prophetic, but scientists still have a lot to learn about the actual conditions on Enceladus. “It’s clear there is liquid water, but we’re not sure how much,” says planetary scientist Frank Postberg of the Max Planck Institute for Nuclear Physics in Heidelberg, Germany, lead author of the sodium study. Scientists still need to figure out whether these pools are isolated or are connected to a larger ocean. The authors of a separate study released concurrently with Postberg’s concluded that any substantial ocean probably lies far beneath the moon’s surface.

In contrast to Enceladus’s recent rise to fame, massive Titan and its hazy, orange atmosphere have long intrigued astronomers. In 2005 Cassini dispatched the Huy­gens probe to land on Titan, revealing muddy, Earth-like river channels and a pebble-strewn surface. “It was striking how familiar those images were for such an alien place,” says Elizabeth Turtle of the Applied Physics Laboratory at Johns Hopkins University. Since then, Cassini has employed radar and infrared imagers to peer through the thick atmospheric layers, revealing a complex geologic and chemical world. “Titan is a complete system,” says Robert Brown, a planetary scientist at the University of Arizona at Tucson. “It has something for everyone.”

Last year Brown and his team found that Titan has at least one lake of hydrocarbons, providing the first direct evidence of surface liquid in an alien world. After imaging showed a dark blotch on an otherwise bright landscape, scientists analyzed sunlight reflected by the feature to reveal that it is made up of liquid ethane, probably mixed with liquid methane. Researchers are watching this lake and other possible liquid deposits to see how they change with time; a recent study suggests that some lakes are seasonal reservoirs filled during intense methane rainstorms. Researchers at the University of California at Berkeley observed this rain in action, studying the change in clouds’ transparency as they released methane droplets. Many scientists believe that methane circulates on Titan, much as water does on Earth, in a cycle of evaporation, condensation, and precipitation.

On our planet, life replenishes the supply of organic molecules such as methane. Titan’s methane cycle is probably not biologically driven, but studying chemical reactions there could provide clues to the processes that led to life on Earth billions of years ago. Because of Saturn’s slow, 30-year orbit around the sun, August marked the start of only the second Saturnian season Cassini has observed on Titan. Now that researchers have a good idea of how Titan looks during the planet’s southern summer, they hope to see how things change as local autumn and winter set in—but that will happen only if NASA opts to extend Cassini’s funding, set to expire in the summer of 2010. For now, scientists will have to settle for five more Titan flybys scheduled for this year, followed by nine more before next July.

Whatever NASA does, Cassini has redefined our perception of the outer solar system. Worlds once considered barren have turned out to host complex geologic processes, most likely fueled by heat from the gravitational push and pull of mammoth Saturn. Astronomers are now looking into evidence that two other Saturn moons, Dione and Iapetus, may also be active, emitting gases from their surfaces. “Everywhere you look, Saturn seems to be a treasure trove,” Brown says. 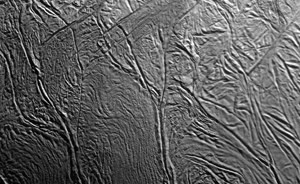 And the impact of Cassini’s study of Titan and Enceladus extends far beyond Saturn; the findings have also changed the rules of the search for alien life. Recent surveys of faraway stars have focused on finding Earth-size objects orbiting in what is known as the habitable zone, the region where liquid water could presumably exist on the surface of a planet or a moon. With the realization that a little moon, 10 times farther from the sun than Earth, likely hosts liquid water, and that a similarly frigid object sustains an atmosphere and complex organic chemistry, scientists are dropping their preconceptions. Life could exist in many different settings, it seems—perhaps even elsewhere in our solar system.

Habitable Zone: Region of space identified as most hospitable for life. It may boast liquid water, organic molecules, and a source of energy to drive chemical processes.

Methane: A simple organic molecule (CH4) found in Titan’s atmosphere and in icy jets on Enceladus.

Mass Spectrometer: An instrument that can determine the chemical composition of a gas by measuring the masses of its constituent molecules. Cassini’s spectrometer recently detected ammonia in jets spewed from Enceladus.