The Science of Science

Thanks to recent technology, science takes a hard look at itself. 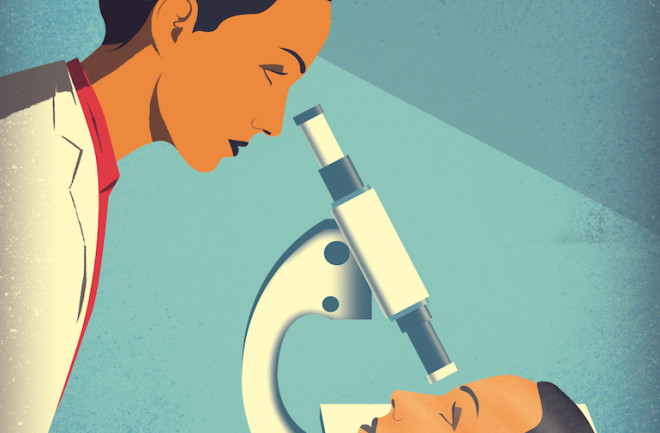 In the late 1940s, while a new library was being built at the future National University of Singapore, a young mathematics instructor named Derek John de Solla Price stored the Philosophical Transactions of the Royal Society of London in his bedroom. When he placed the archives, starting with the first volume from 1665, into chronological stacks by decade, he was struck by what he saw: The height of each stack increased exponentially. Presenting his findings at the 1950 International Congress of the History of Science, Price theorized the growth was a characteristic of science itself.

His insight was prescient, and not only in anticipating the ever-escalating onslaught of publications. Today, a growing number of researchers are studying the inner workings of science, trying to make future work more effective. “The science of science has really exploded in the last 10 years,” says Northeastern University physicist Albert-László Barabási, a leading expert in the field often referred to as SciSci.

Although the discipline’s roots go back to the middle of last century, it has only really blossomed with modern processing technology. Instead of physically stacking and sorting journals, researchers can now digitally manipulate enormous online databases amassed by the likes of Google and the National Institutes of Health. And there’s a vast amount to learn.

For example, physicists were recently surprised to discover nobody had undertaken a basic census of physics. How many physicists are there? How are they distributed among subfields? Which subfields are producing the most high-impact science? Without this knowledge, the organizational decisions that universities and journals made were little more than guesswork. So in 2017, the editor-in-chief of the journal Nature Reviews Physics commissioned Barabási and his Northeastern and Central European University colleague Roberta Sinatra to map out the field using a proprietary database called the Web of Science.

Together with four other researchers, they analyzed roughly 5.6 million papers authored by 135,877 physicists between 1985 and 2015. The results, published in January, provided the first rigorous demographics of physics. It also showed that one of the subfields — interdisciplinary physics, an intersection of the field’s main branches — contributes the most impactful research, but is underpopulated and poorly supported. For instance, less than 2 percent of the 32,000 physicists who work in interdisciplinary physics specialize in it (meaning they don’t spend a lot of time working in other subfields). For comparison, the most popular subfield, condensed matter physics, boasts over 62,000 physicists, comprising over 40 percent of all specialized physicists. Yet it has the most high-impact, or most highly cited, papers in relation to its size.

“There is clear evidence of discrimination of interdisciplinary physics,” says Sinatra, now based at the IT University of Copenhagen. She believes these empirical observations can serve as a call to action for funding agencies to provide more money, and for schools to guide more young scientists toward interdisciplinarity — a move that would bolster future scientific discovery.

SciSci has also reexamined some old myths that could hinder research, like the long-standing claim that scientists produce their most important work at the beginning of their careers. But an analysis of 514,896 papers in a diverse range of fields shows that a researcher’s most important work could be published at any time — that likelihood isn’t restricted to the early days of a scientist’s career.

Not that SciSci is faultless. In 2007, researchers published a Science paper on the nature of collaboration, stating that, compared with work by individual researchers, teams “produce the exceptionally high-impact research.” The paper was used as “a primary justification for enlarging teams everywhere,” says James Evans, a sociologist at the University of Chicago. “But it was only half the story.”

Earlier this year, Evans published a new analysis in Nature confirming that large teams (which can exceed 1,000 people) are excellent at fleshing out existing theories. However, it seems they’re abysmal at generating novel ideas that take science in new directions. The smaller a team is, the more adept it is at “disruptive” science. Evans believes this is because smaller groups are more flexible and less risk-averse. He argues that funding small teams, while riskier, is essential. Without such groups to pioneer new directions, large teams may be left with nothing to develop.

Evans’ research, and that of other SciSci experts, shows that science can discover its own excesses and correct past errors — a hallmark of the scientific process. Through the science of science, science is guiding itself.

[This article originally appeared in print as "A Look in the Mirror."]