The Roller Coaster Designed to Kill 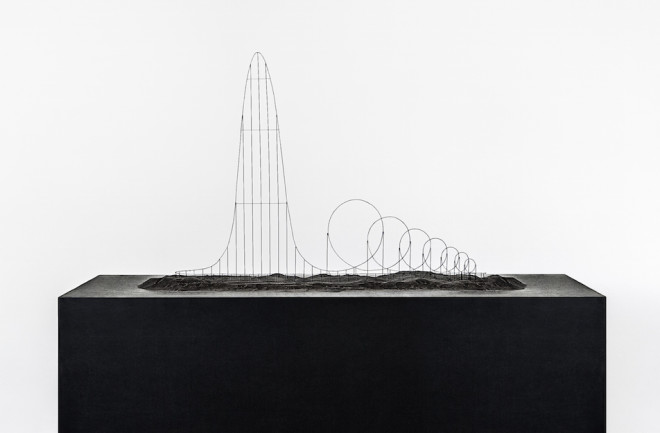 What is this, a "Euthanasia Coaster" for ants? (Credit: Julijonas Urbonas) I have a friend who loves roller coasters. He once told me, a fellow coaster-head, “You ever get the feeling that most people say they like roller coasters, but then when they’re in a park they just ride one or two of them and call it a day?” I nodded in the shared sentiment. All of that said, there’s at least one roller coaster that I, or my friend, am not interested in trying out: the "Euthanasia Coaster."Truth in Advertising It’s exactly what it sounds: A roller coaster designed to kill people. Or, as the designer — self-described artist, engineer and former amusement park worker Julijonas Urbonas — puts it, a “death machine in the form of a roller coaster, engineered to humanely – with elegance and euphoria – take the life of a human being.” Applications include: euthanasia, execution and “black humor prop.” It was conceived in 2010 and still exists only as an idea and model, but the concept, it seems, is sound. With a max speed of 220 mph, seven inversions and an initial drop of 1,640 feet, it definitely sounds like an exhilarating ride. Until the prolonged G-forces deprive your brain of enough oxygen to kill you, of course. A Unique Experience The whole thing sounds a little crazy — and it is, as the slightly nausea-inducing font on Urbonas’ website reinforces — but really, it doesn’t sound like a bad way to go. The coaster could provide a painless, exciting and apparently euphoria-inducing way to kill people who, for whatever reason, are going to die sooner rather than later anyway. The detail Urbonas puts in his description of the experience almost makes it sound fun.

You relax and press the FALL button. Whirrr… swish – the ultimate surrender to gravity! No, you realize, in fact it is even greater than just giving up, as in the blink of an eye you enter the heart-line, the whirling element of the coaster track, where your heart stays roughly in line with the centre of the fall trajectory. In other words, your body spins around the heart while you fall. Gravitational choreography! The scooting gust of wind, goose bumps, suspension of breath, and vertigo — a set of experiences comprising a sort of fairground anaesthesia — prepare you for the fatal part of the ride. Now you are already falling at a speed close to the terminal velocity, when the force of air drag becomes equal to the force of gravity, thus cancelling the acceleration. You feel your body as if supported by an air pillow.

Ahhh, how relaxing. The Ultimate Roller Coaster Surely there’s lots to say about such a design artistically, philosophically, ecumenically. But scientifically, it looks like it would work, and how like an engineer to try to find a viable solution to society’s problem of having to kill people.