The story of how the first vertebrates came to walk on land hundreds of millions of years ago and filled the Earth with its many descendants. 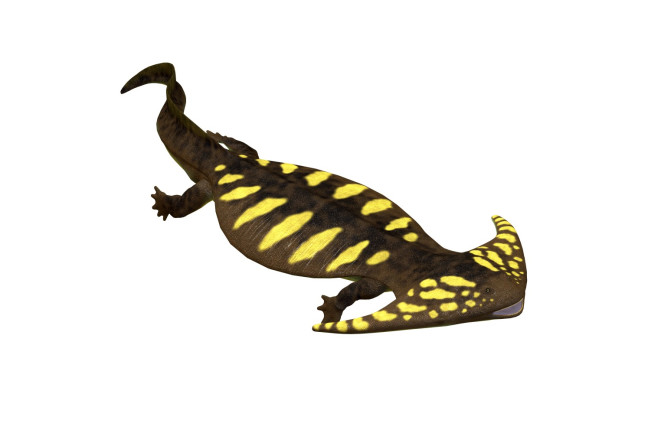 Some of the first creatures to walk on land looked like meter-long salamanders; but they weren’t, at least not quite yet. They had teeth specialized in tearing flesh similar to a monitor lizard today; but they weren’t that either, yet. Their limbs could have seven or eight digits, depending on the species. And their eyes sat roughly on the top of their heads, perhaps to get a better glimpse of the terrestrial possibilities just beyond the water, where they likely spent much of their time.

Acanthostega and Ichthyostega represent the most complete surviving fossils we have discovered of the earliest tetrapods, a group whose descendants would be the first vertebrate creatures to leave the oceans and walk on land. Tetrapods like these and their descendants would go on to have a successful run of the planet for the next 365 million years, diversifying along the way into animals that can sprint, crawl, lay eggs out of water or even give live birth.

Some became the largest animals on land while others can metamorphose through several stages during their lives. Others still moved off land, taking to the skies or moving back into the oceans. If you have any doubts about the success of their evolutionary descendants, just ask yourself — you’re one of them.

So, how did tetrapods evolve from fish to amphibians, dinosaurs, reptiles, birds, mammals and everything in between? Some researchers believe it was the promise of opportunity in a series of new ecosystems, triggering countless small adaptations over eons.

The ‘Rosetta Stone’ of Tetrapods

Anytime you look back 365 million years in the fossil record, you’re going to have a lot of gaps in understanding. Acanthostega and Ichthyostega aren’t necessarily the oldest traces we have of tetrapods, but they are the most complete among early-known tetrapods.

“Those are like the Rosetta Stones of tetrapods,” says Robert Gess, a paleontologist at the Albany Museum in South Africa. The fossils are so complete that they have allowed researchers to identify other individual fossilized bones as coming from Devonian tetrapods, by comparison.

Acanthostega and Ichthyostega lived during the Late Devonian period and all discovered material from them so far have come from East Greenland. They developed a dual system of breathing, with both gills and lungs, allowing them to get oxygen from both air and water. These creatures have four limbs and digits on each of them, though the number of digits varies. A species more closely related to a direct ancestor of amphibians, reptiles and mammals carrying five digits on each limb hasn’t been found yet in Devonian rocks.

“If you can find a Devonian tetrapod with five toes, you’ve probably hit upon something very close to our ancestors,” Gess said, though he acknowledges that this common feature may not have evolved until after the Devonian period.

To Land From Where?

While we haven’t yet found any tetrapod bone fossils from the Early Devonian, it’s likely they first evolved in this period. The first tetrapods likely evolved from Elpistostegalia, a group of creatures sometimes called fishapods that had basically lost all fins except for four sitting around the place that limbs would later develop.

Tiktaalik is the best preserved of these, found in Ellesmere Island, the northernmost land mass of Canada, dating to about 375 million years ago. These creatures have primitive lungs and eyes on the tops of their heads.

Species of this genus likely didn’t go extinct until after the first tetrapods evolved, since Acanthostega and Ichthyostega aren’t the earliest traces of tetrapods yet discovered. Perhaps fittingly, the only thing we have from the first known land-walking tetrapods are their footprints. In the Middle Devonian, the earliest we have now are a set in Poland dating to about 390 million years ago and a set in Ireland from about 384 million years ago.

“We know if it had footprints it was walking in land or shallow water,” says Per Ahlberg, an organismal biologist at Uppsala University in Sweden. Based on a closer examination of these tracks, they can even tell if it was shallow water or dry land, he adds. “If you get tail drag with no body drag, you’re probably looking at a track on land.”

The Appeal of Land

Our distant ancestors wouldn’t have made the jump onto land immediately. They may have started out adapted to shallow water similar to the way alligators are today, though crocodilians were actually descended themselves from land creatures.

“You’ve got to have an intermediate behavior,” Gess says. He believes that the first tetrapods or their ancestors moved into shallow water to exploit an ecosystem that other predators weren’t able to tap into. Tetrapod fossils he has found so far in South Africa were discovered in estuarine deposits, places that today function as nurseries for a lot of marine fish. Larger fish can’t get into these areas, and the development of limbs to better move initially in shallow water would have given them a “supreme advantage in taking advantage of small schools of young fish.”

The breathing holes tetrapods developed on the backs of their heads support this idea. Warm shallow water is also often low in oxygen, which could have sparked the increased development of lungs alongside the gills of the early tetrapods.

Gess’ tetrapod discoveries in South Africa, which back in the Devonian was within the Antarctic Circle, show that tetrapods were pretty globally distributed — clearly they had a successful life strategy.

Survival of Fittest and Romer’s Gap

Many of the Devonian tetrapods were knocked out of existence during the Hangenberg Event, which is associated with the Late Devonian extinction. It’s unclear what happened exactly to cause this event, but climate change meant our oceans were depleted of oxygen. UV-B radiation from the sun also increased at this time, causing one of Earth’s great extinction events and putting an end to the Devonian period about 360 million years ago.

Little evidence has turned up from the ensuing 15 million years, a time known as Romer’s Gap during the beginning of the Carboniferous period. But a few tetrapods made it through, perhaps because they had already adapted to living at least partially on land.

“It’s like there’s a bottleneck in tetrapod evolution at this point,” says Michael Coates, a vertebrate paleontologist at the University of Chicago who constructed much of what we know today about tetrapod evolution along with his late colleague Jenny Clack.

One of these survivors may have been the Whatcheeriidae family, fossils first discovered by Clack in Scotland. But other fossils that may be from this group found in the U.S. Midwest would extend the lifetime of this group back to the Devonian, implying they survived the Hangenberg Event and Romer’s Gap.

Whatever happened in the early Carboniferous, it didn’t take long for tetrapods to take off. On the one hand, you have creatures like the Crassigyrinus species that nearly lost their limbs again similar to modern worm lizards. They apparently readapted to a mostly aquatic life.

“If you look at these early tetrapods, you’ll come across some really ugly beasts,” Coates says. But a number of land creatures are also adapting into different forms: “You’ve got things that look like large aggressive salamanders, or monitor lizards.”

While this all gives us a rough outline of evolution from the time of the first land creatures to the first mammals, a lot of the specifics remain a bit fuzzy. Every fossil discovery has the potential to reorganize our evolutionary history. One of the most recent studies, for example, found that tetrapod brains only filled about half of their skulls. The rest was filled with fatty tissue or fluid, leaving a lot of space for growth as the creatures gradually adapted to life on land.