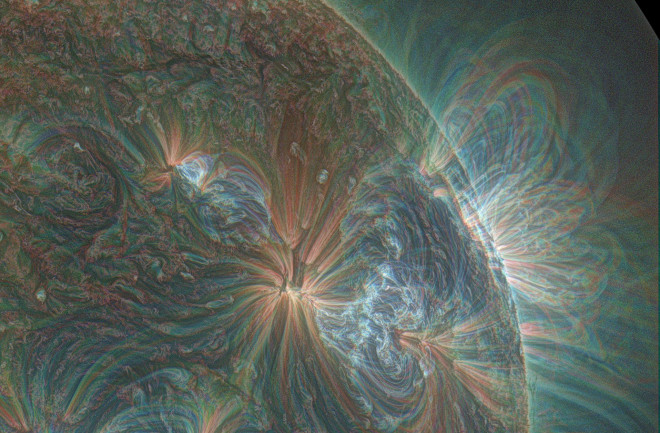 The Sun, as seen by NASA's Solar Dynamics Observatory. (Source: Alzate/SDO) It may look like something right out of the Joshua Light Show circa 1969, but it's actually a real image of the Sun, as seen by NASA's Solar Dynamics Observatory spacecraft in January of 2013. The image shows the Sun in three wavelengths of light. Each has been colorized either red, green or blue. And while the result seems downright psychedelic (especially to a Boomer like me who is old enough to know what the Joshua Light Show is), this processing reveals the fine details of roiling, magnetized, super-hot solar plasma. This processing technique has allowed scientists to tease out details of a series of jets and flares that spewed plasma and radiation into space, culminating in a much more massive blast of solar material. You can find all the scientific details here. But before you go, make sure to enlarge the image above by clicking on it, and linger on the details. You might find it mesmerizing. Maybe even a little like this. (Yes, that's the Joshua Light Show in the background...)