The Promise of Space-Based Solar Panels

Solar satellites could deliver clean, abundant power — if they get off the ground. 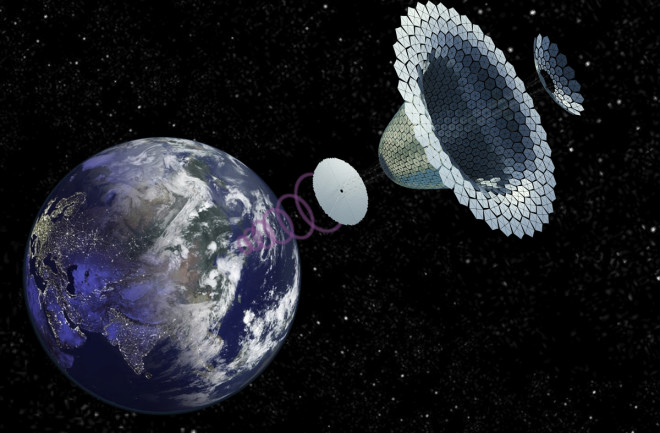 The SPS-Alpha solar satellite, shown in this illustration, uses a cone of mirrors to redirect sunlight onto photovoltaic panels. The energy is then converted to microwaves and beamed down to Earth. SPS-ALPHA concept/John C. Mankins

Nowhere on Earth does the sun shine as brightly as it does in geosynchronous orbit, that parking space 22,236 miles up where a satellite can keep a spot on Earth in steady view all day, every day.

Placed high above the gauzy atmosphere, solar panels can intercept rays 35 to 70 percent more intense than midday sunlight on the ground. In high orbit, there is no cloud cover, no twilight, no wan winter sun. And a cleverly designed and positioned solar satellite can avoid the shadow of night for all but 44 hours a year, so there is no need to store energy to keep the electrons flowing almost continuously.

All told, an advanced photovoltaic cell in space can deliver up to 40 times the annual amount of reliable 24/7 energy that the same cell would generate on the ground. It’s not solar power so much as it is stellar power.

Dreamy-eyed physicists have effused about the potential of stellar power, also known by the more prosaic name of space-based solar power, or SBSP, since the 1960s. They have sketched out preliminary designs that would bring that power from orbit to the grid — a giant engineering challenge, to be sure, but one that now has plausible solutions. What they haven’t been able to do is make it affordable.

Space scientists have roughed out designs for several different kinds of stellar power plants. Some look like an orbiting version of a terrestrial solar farm, with flat photovoltaic arrays stretching for miles. A design for NASA called SPS-Alpha, by former NASA physicist John Mankins, instead arranges thin-film mirrors into a bell shape that can redirect sunlight from almost any angle onto a smaller photovoltaic array.

The electrical current generated by an orbiting array can be sent to Earth in one of two forms. It could be converted into a broad infrared laser beam, or it could come down as a wider cone of microwaves, which, as Mankins notes, pass through clouds unimpeded. In either case, the satellite would focus its transmitter on a large receiving station on the ground. (See next page.) To ensure safety, the beam would be no more intense than the noonday sun, and a feedback signal would keep it from straying from its target.

As Mankins points out in his 2014 book The Case for Space Solar Power, the orbiting plants would tap an essentially limitless supply of free fuel. After they are launched, their only waste stream would be heat, which poses tricky technical issues but not environmental ones. And a solar plant in space would need far less routine maintenance than one on the ground. Although commercial-scale power satellites would be huge and hard to build in orbit — with assembly done mainly by robots — they would have hardly any moving parts and could last for generations.

NASA, the U.S. departments of Energy and Defense, the European Space Agency, the Japanese Aerospace Exploration Agency (JAXA), a handful of companies and a gaggle of academic scientists all have taken hard looks at stellar power technology, and they concluded that, from a technical point of view, it is feasible.

Rocket launch costs need to fall for space solar to get off the ground. SpaceX. bottom

Yet one obstacle has seemed insurmountable: the cost to get up to 10,000 tons of components all the way to geosynchronous orbit. Rockets today are not reusable, and that makes them so expensive — currently around $4,600 for each kilogram of payload lofted into low orbits — that the economics of putting solar modules in space just don’t pencil out, even if the modules use solar-electric propulsion to lift themselves into their final orbit. For stellar power to compete with other kinds of renewable energy, those costs need to drop to around $400 a kilogram, Mankins estimates. Rocket launches would have to become a lot more frequent as well. Building a large plant would require hundreds of launches a year.

A tenfold drop in price and a manyfold increase in launch frequency might seem like wishful thinking. But SpaceX, a private company whose Falcon rockets now resupply the International Space Station, recently announced ambitious plans to make that happen. The company has designed a reusable booster that it believes can return to Earth, land gently on its feet and take off again within weeks. Elon Musk, the company’s audacious billionaire founder, has said that when rockets can be reused like airplanes, launch costs will fall by up to 99 percent.

The first attempt to land a Falcon after it delivered its payload to orbit, in January, ended in a near miss and an explosion. But in a more recent test in April, the rocket returned upright to the correct coordinates. (It landed, but then toppled over in high winds.) Musk has vowed to perfect the process.

He apparently has set his sights on near-daily launches, too. That is key to his plan, announced in January, to enrobe the planet with 4,000 communications satellites — more than triple the number of satellites now in orbit — starting around 2020. Musk has shown little interest in space-based solar power; his goal is to rebuild the backbone of the Internet in space. But if SpaceX succeeds with its reusable rockets and ramps up its launch rate as planned, it “could reduce launch costs enough to make SBSP cost-competitive,” says Susumu Sasaki, a veteran of JAXA’s stellar power program.

A large receiving station on the ground would convert the microwaves beamed down from space into electricity. Mafic Studios Inc.

Lower launch costs are one necessary step, but investors will not place big bets on an unproven technology unless it can deliver quick profits, contends Marty Hoffert, an emeritus professor of physics at New York University who has long championed stellar power. “You still need an evolutionary path, with upfront costs that seem manageable, and where you can see a business plan emerging,” Hoffert says.

Recent history gives investors reason to be cautious. In 2009, a startup called Solaren won a much-publicized contract to supply the biggest utility in California with 200 megawatts of power from space starting in 2016. Space Energy, another startup, also generated a lot of buzz around that time. But both firms failed to meet their ambitious timelines and have fallen silent.

Mankins, the SPS-Alpha designer, is optimistic, however. He believes he has a business plan that can fly: integrating space-based solar and communications capabilities. These would not be the low-flying satellites that Musk plans to field, but geosynchronous ones that get launched every year to relay TV, radio and telephone signals.

“We could make a very small version of SPS-Alpha and slightly modify the transmitter before launch to send radio signals rather than a microwave beam. Then the power station becomes a high-power communications satellite” with potentially megawatts at its disposal, he says. It could offer 10 to 50 times more bandwidth, thereby generating more revenue, yet cost little more than a standard satellite, he says. Mankins has lined up investors and recently launched a startup that will to try to sell the idea to customers like DirecTV or Verizon.

Such next-gen satellites would provide both funding and real engineering experience to develop space-based solar energy further. That might seem like a small step for global energy production, but it would be a giant leap for stellar power.

[This article originally appeared in print as "Stellar Energy."]