Carl Zimmer asks "Will Anyone In Alabama Speak For Evolution?" The story is that a Republican candidate for governor in Alabama is being accused of not being a Creationist, and he is asserting that he is a Creationist. Some people might be surprised by this, but this is Alabama. It is famously well known that the general public tends to split down the middle in regards to evolution, and that there is a class aspect to the division. But what's the breakdown by region? The GSS can help. Let's look at two variables: SCITEST4: In your opinion, how true is this? Human beings developed from earlier species of animalsREGION, which you can see on the Census Division map below:

And the chart below shows the responses by region: 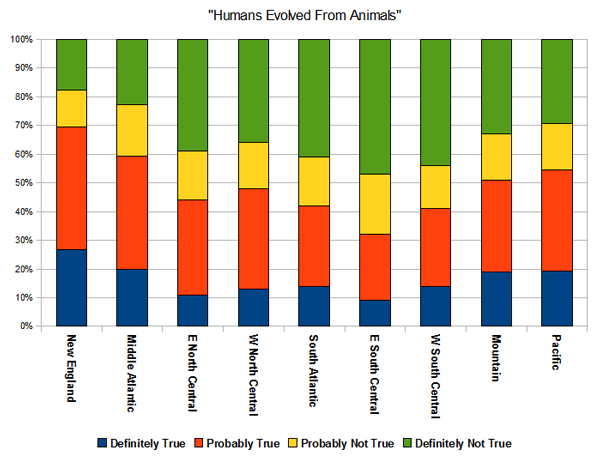 Alabama, Tennessee, Kentucky and Mississippi are in the "East South Central," and that's the most Creationist region of the country. To come out and support evolution in that region you need to either be a Yankee, or the president of Auburn university!