The Passion of the Pluto-Philes

At New Horizons mission control, a 12-watt signal from 3 billion miles away unleashed a surge of scientific emotion. 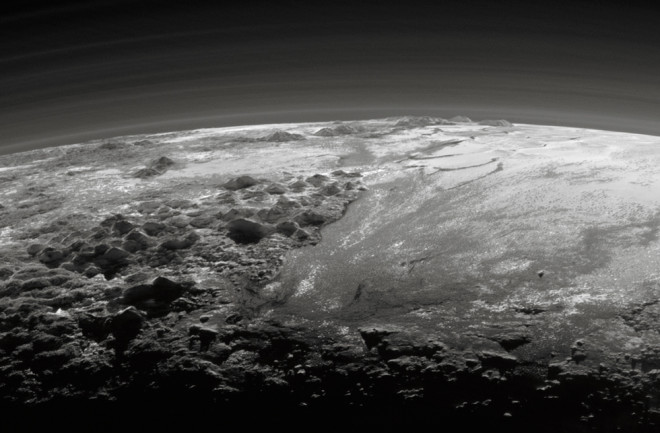 Sign up for our email newsletter for the latest science news
The crowd at New Horizons mission control counts down to the spacecraft’s closest approach to Pluto on July 14. | NASA/Bill Ingalls

On July 14, I was driving back to Johns Hopkins University’s Applied Physics Lab in Laurel, Md. — mission control for the New Horizons spacecraft — when I suddenly found myself swept up in an interplanetary race. Earlier in the day, I huddled with the science and engineering teams as the probe completed its historic Pluto flyby.

Or rather, as we all hoped it had. We wouldn’t know for sure until New Horizons’ “mission accomplished” signal arrived, and because of the enormous distance involved, that signal would take a tedious 4.6 hours to reach Earth. So we all took a break while waiting for the triumphant message, due to arrive at 8:53 p.m.

Just as I pulled into the parking lot, prepared to join the vigil, I realized with a sinking sensation that I had left my laptop behind at dinner. I did a quick calculation. The 5-mile trip to the restaurant would take about 10 minutes, plus another 10 minutes to get back. It was 8:30. Possible, if I made perfect time. I had no choice; all my notes and files were on that computer.

As I passed the slower cars and tried to beat the traffic lights, it struck me: I was trying to outrun a radio beam, heading Earthward at the speed of light. Twenty minutes to go, and the signal had already crossed Jupiter’s orbit; 10 minutes to go, and it was past the asteroid belt.

I sprinted into the main conference room with two minutes to spare — I beat the beam by 22 million miles. As I entered, I heard the flight engineers tick off a checklist of perfect readings. I watched New Horizons project leader Alan Stern beam incandescent at the success of his mission. I waved a small U.S. flag in unison with the rest of the crowd. And I shared the Pluto scientists’ thrill at having caught up with the dispatches from the edge of the solar system.

Those dispatches have been a long time coming. Stern first proposed a NASA mission to Pluto in 1990. It got no traction. A succession of follow-up proposals fared better, but still not well enough. One of them, called Pluto Kuiper Express, got as far as the design stage before it was abruptly canceled in 2000. Even when New Horizons was finally approved, budget cuts effectively terminated it in 2002. The scrappy probe managed a rare resurrection after getting staunch support from the National Academy of Sciences and the community of outer-planet researchers, along with passionate lobbying by The Planetary Society, a nonprofit group.

Further boosting the historical resonances, the New Horizons Pluto flyby occurred 50 years to the day after Mariner 4 sailed past Mars and returned the first images of a planet from deep space. That’s either a very slow or very quick achievement, depending on your perspective. John Grunsfeld, head of NASA’s Science Mission Directorate, opted for the latter, telling the celebrants in Laurel, “Five hundred years from now, we will look back on this as the golden age of exploration.”

All of the delayed — and nearly denied — gratification behind New Horizons was obvious in the rapturous applause after the 8:53 p.m. signal. But the scientists gathered at the Applied Physics Lab had not come for closure. Now that they finally had caught up with Pluto, Stern and his many cohorts were fixated solely on the future. In the new view, Pluto is no longer the last planet, but rather the first and largest member of the Kuiper Belt, a population of billions of frozen comets and a handful of planetlike bodies beyond Neptune. As Grunsfeld put it, “We’ve opened up a new realm of the solar system.”

New Horizons is giving us our first look at this entirely uncharted class of objects. The Kuiper Belt began to take shape 4.5 billion years ago, early in solar system history, and it has evolved separately from all the other worlds we know. It preserves the gases and organic molecules that circulated as Earth was forming, and it has a unique chemical and geologic history. Nobody knew what to expect from Pluto.

Ellen Stofan, NASA’s chief scientist, was rendered briefly speechless when she saw the first full close-up Pluto portrait circulating around the lab July 15. She wondered aloud: Where are all the craters? Is the surface geologically active? How old is it? Stofan misted up as she reflected on the storied path that had brought humanity to Pluto. “I don’t normally cry when I see planetary images,” she apologized, before adding, “OK, sometimes I do, especially if it’s Titan.”

The acute sense of adventures ahead — not of obstacles left behind — dominated the emotions at mission control. Alan Stern, tightly controlled until he heard the all-clear signal, pumped his fist, uncurled a mad grin and exclaimed, “We did it!” Jeffrey Moore, a co-investigator on New Horizons, giggled that the first look at Pluto “blows my mind, blows everyone’s mind.” Fran Bagenal, another co-investigator and team veteran, confided that she was “jumping up and down” as each new image downloaded.

Meanwhile in the main conference hall, Pluto enthusiasts were passing around a model of New Horizons that could be worn as a hat. People took turns snapping photos, often waving the unofficial Pluto salute: nine fingers held up in solidarity with the former ninth planet. Five minutes in that room would cure anyone of the misconception that scientists are not emotional people.

The initial messages from New Horizons can be summed up in those three words that make any researcher smile: surprise, surprise, surprise. Start with that largely crater-free surface that Stofan marveled over.

The general assumption had been that objects in the Kuiper Belt should be geologically inactive because they are so cold. But the first New Horizons views revealed expansive, smooth plains in some areas that appear to be no more than 100 million years old, quite youthful in geologic terms. The images also showed a range of 11,000-foot-high ice mountains, flowing glaciers of frozen nitrogen and a pervasive coating of organic compounds that has painted the whole world pinkish-red.

“We now have an isolated, small planet that is showing activity after 4.5 billion years,” Stern told the crowd at the Applied Physics Lab. “It will send a lot of geophysicists back to the drawing board to figure out how that works.”

Even more shocking, Pluto’s biggest moon, Charon — just 751 miles wide — also shows a dynamic, rifted surface, with a dark smudge at the north pole, possibly methane captured from Pluto’s thin atmosphere. At the same time, Charon’s colors and overall geology look drastically different from Pluto’s, for reasons only vaguely understood. “It just blew our socks off!” exclaimed Cathy Olkin, deputy project scientist for New Horizons, to another round of applause.

The dispatches from New Horizons are still coming in long after the crowd departed. The probe’s modest data-transmission rate means that the full Pluto data set will not reach Earth until October 2016. All of the eye-popping discoveries reported during the flyby events were based on just the first 2 percent of data returned. While the scientific lessons of New Horizons are just starting to sink in, the main message has already come through loud and clear. The worlds of the Kuiper Belt are lively and diverse, unlike anything humans have seen before.

But Stern had one last surprise that night. “I’ve been secretly working on a Pluto lander,” he blurted out after unveiling the initial New Horizons images. People laughed good-naturedly, but then he cut them off: “I’m serious.”

And why not? Now that we’ve caught up with Pluto, we have a sense of just how much more adventure and excitement awaits out there. The only question is, do we have the resolve to continue the race.