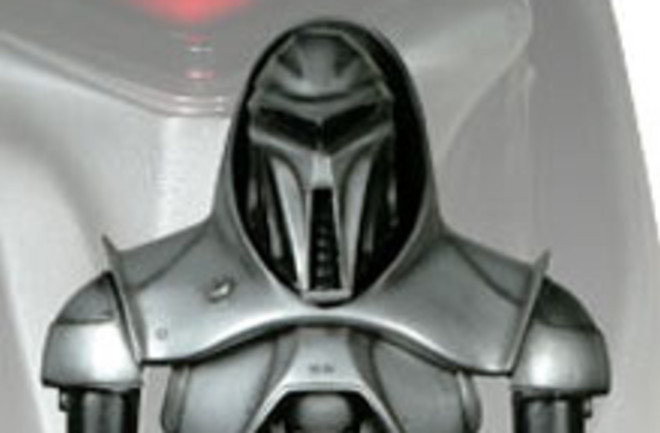 Just out of a Comic-con panel celebrating 30 years of the Battlestar Galactica franchise. Present were Richard Hatch (who plays Tom Zarek in the new series and played Apollo in the original); Bear McCreary (who composes the music for the show, and told us that Ron Moore was very specific, for reasons as yet unannounced but which will become clear, about using Dylan's "Along the Watchtower" as the background music to the season three finale, in which four humans are revealed as cylons); Kevin Grazier (Battlestar's science advisor and panelist on DISCOVER's "Science in Science Fiction" panel later today); and, interestingly, Tom DeSanto (best known as the producer of X-Men and Transformers.) DeSanto was just weeks away from filming his own TV relaunch of Battlestar Galactica in 2001: set construction had begun and FOX had agreed to a pilot. A confluence of events (including 9/11 and problems with X-Men 2) caused the deal with FOX to fall through. This series was intended to be a continuation of the 1979 show, not a complete re-imagining from the ground up, as happened in Ron Moore's version. DeSanto sketched out the premise of this version: about five years after the end of the original series, the rag tag fleet had a vote and decided to stop searching for Earth, opting instead to build a giant spacestation near an asteroid field. Before long the Cylons are forgotten in the pursuit of commerce and "pleasure domes." Until another twenty years pass and the Cylons return... Richard Hatch would also have returned in this version -- this time as a human being converted into a Cylon hybrid. One thing remains constant across all the continuations and re-imaginings: no one appears willing to resurrect Galactica 1980.