Where our supply of helium-3, a rare form of the element, came from is much debated. A new model takes a second look at an older and controversial theory. 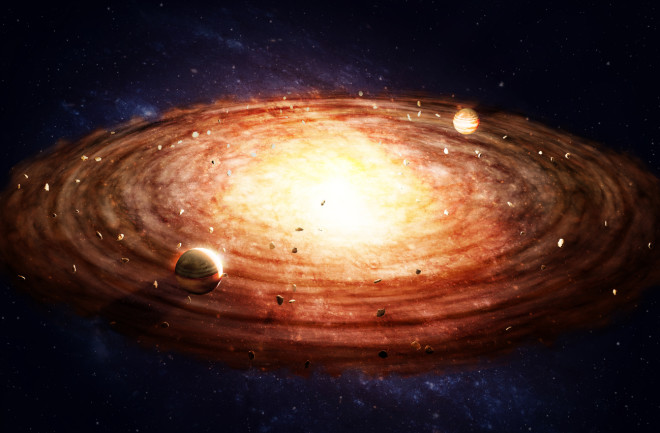 In the beginning, all was dust and gas. For a while, anyway — until a great gas cloud, called the solar nebula, in what would become our solar system gradually condensed. Then came the Sun. Eventually, the closer, hotter protoplanets collected heavy metals floating around and became the terrestrial planets (Mercury, Venus, Earth and Mars) and the more distant protoplanets, in turn, became the gas giants (Jupiter, Saturn, Uranus and Neptune).

How Earth ended up with its volatile chemicals — composed of elements like hydrogen that can easily transform into lightweight gases and vapors — has therefore been something of a mystery. In particular, Earth’s persistent supply of a rare form of helium, called helium-3, has posed a challenge. Most of it was created shortly after the Big Bang, and its supply isn’t replenished on Earth. Yet mid-ocean ridges steadily leak about 4 pounds of it into the atmosphere each year.

Two theories have prevailed. Either Earth’s volatiles were delivered by asteroids, or they were delivered by comets. But there is an older and more controversial theory: The solar nebula itself may have delivered primordial helium-3 into the planet’s core, says stable isotope geochemist Zachary Sharp, director of the Stable Isotope Centre at the University of New Mexico.

If the Earth had acquired over a third of its final mass while the solar nebula was still intact, it would have formed an atmosphere dense in hydrogen and helium. Under high pressures, however, those gases might have dissolved in the molten lava that covered the planet’s surface — like carbon dioxide dissolving in soda when forced under pressure into a can, says Sharp. From there, the helium-3 could’ve diffused through the earth, even reaching down into the planet’s core.

Because volatile helium-3 is so easily lost to space, its continued presence could be a vital clue about Earth’s history. If asteroids or comets had delivered it, as has previously been suggested, “the helium would just be lost to space. It would never make it to the core,” explains Sharp. “If we have helium leaking from the core, it’s kind of a smoking gun that we had that high-pressure solar nebular atmosphere.”

A looming question is whether the iron that went on to form Earth’s core could have brought any lighter materials along with it. While it remains uncertain with regard to helium-3, recent studies have demonstrated it’s possible for other volatiles. And in a paper published last month, Sharp and a colleague, geophysicist Peter Olson, created a model demonstrating how helium-3 could have gradually leached out of the core and into the mantle, creating a stable reservoir for the mantle to draw from.

What makes the core a promising reserve of helium-3 is its relative stability, says Sharp. Unsurprisingly, over the course of over 4 billion years, Earth has survived some major traumas and, on a geological scale, is in constant flux. But its core doesn’t participate in tectonic plate cycling and has remained liquid since the planet first formed.

In Sharp and Olson’s model, the assumption is that Earth lost most of its helium early on; perhaps a large proto-Moon struck our planet, flinging the element into space. If the core was left with substantially higher helium reserves than the mantle, the element might have gradually leaked from the former into the latter.

Of course, this isn’t the only theory going. Researchers have also pointed to the large low shear velocity provinces, or superplumes, that reside within Earth’s deep mantle as being possible helium-3 reserves. The superplumes, which can extend laterally for more than a thousand miles, share some of the characteristics that make the core a promising candidate. For example, the structures have been stable for hundreds of millions of years.

Additionally, mantle plume trajectories that contain high levels of helium-3 tend to converge around these superplumes — but simulations suggest that this may be a coincidence. Mantle plumes likely pull little material from the larger superplumes; instead, they draw from the hottest part of the basal thermal boundary layer — exactly where Sharp and Olson suggest you’d find helium-3 leaking from the core.

The two researchers, in their paper, further note observed correlations between the high temperatures of mantle plumes and high amounts of helium-3. Put another way, the closer those plumes are to the core, the more likely they appear to have high levels of primordial helium. If the early mantle was deficient in helium, conclude Sharp and Olson, “our results indicate that much of the helium-3 now in the mantle once resided in the core."

Within the context of their model framework, Sujoy Mukhopadhyay, a geochemistry professor at the University of California, Davis, agrees that the core could be leaking helium-3 into the mantle. “But the caveats and assumptions [involved] may mean that their model is not applicable to the real Earth,” he says, adding that the paper was “upfront, honest and refreshing in terms of not trying to over-interpret the model results.”

Sharp and Olson suggest that if their model is correct, they would expect to also find heavier noble gases — such as xenon-129 — leaking from the core as well. But they note that the model is predicated on three assumptions: Proto-Earth must have reached a critical size threshold while the solar nebula was still intact, helium must have successfully partitioned into the core-forming metals, and the early mantle must have degassed very efficiently.

“Individually, each of these particulars is reasonably probable, but the combination of all three is less so,” they write.