The New WTC Tower: Tough on Terrorists, Easy on the Eyes

One World Trade Center rises with a bomb-resistant fortified base, a  superstrong mix of concrete, and a fleet of elevators that can really move. 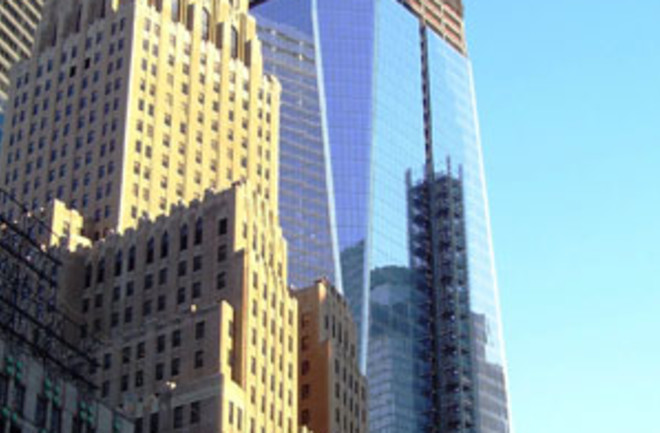 Five of the 70 elevators planned for One World Trade Center will travel at 23 mph. They will be the fastest in North America; an express ride to the top of the 105-story skyscraper will take one minute. In the U.S., most elevators run between 1 and 6 mph. Taiwan’s  Taipei 101 financial center is home to the world’s fastest lift, which tops out at 38 mph. Image: Beyond My Ken/Wikimedia Commons

When architect Minoru Yamasaki began designing two 1,360-foot towers for the World Trade Center in 1962, he gave little thought to terrorism. The same cannot be said for Kenneth Lewis, project manager of the 1,776-foot skyscraper at One World Trade Center, slated for completion in 2013. “At a site in downtown Manhattan that’s been attacked twice, people are thinking about their personal safety,” he acknowledges. Future occupants may take comfort knowing that Lewis and his colleagues have employed the latest materials and engineering techniques to design a building that, despite its soaring height, will be stubbornly resistant to explosions and other violent attacks. “It’s designed to be as secure as a foreign embassy,” he says.

Security measures begin at ground level with a 186-foot base built to withstand a blast more powerful than the 1993 car bombing, which, according to the NYPD, was equivalent to 900 pounds of TNT. While the frame of the Twin Towers was erected entirely of steel, the base of the new building, as well as a core running up its center, will be forged from 5.4 million cubic feet of concrete, enough to fill 60 Olympic-size swimming pools. The concrete mix can withstand pressure of up to 15,000 pounds per square inchand is the toughest ever used for a New York City building. Its strength comes from a combination of reinforcing steel rods, a newly developed mix of materials, and a high-tech curing process. The chemical reactions that bolster concrete as it hardens are very sensitive to temperature, so as the mix is poured, engineers drop in microchip thermometers that wirelessly relay temperature readings.

The building’s surrounding steel frame will be just as tough. When planes struck the Twin Towers in 2001, the floors located just below the impact buckled beneath the weight above, setting off a domino effect that led to a total collapse. One World Trade will feature beams and columns welded and bolted together to distribute the weight, so that if any two columns fail, the rest can pick up the slack.

But Lewis insists these numerous safeguards will not define the tower. “It’s iconic, but not because it looks like a bunker,” he says. “It’s iconic because it’s a beautiful building.”