The moon that almost wasn't

Cassini images of Saturn and its environs never get tiresome. And in fact, they can be downright jolting... like this stunning shot of the icy moon Mimas. 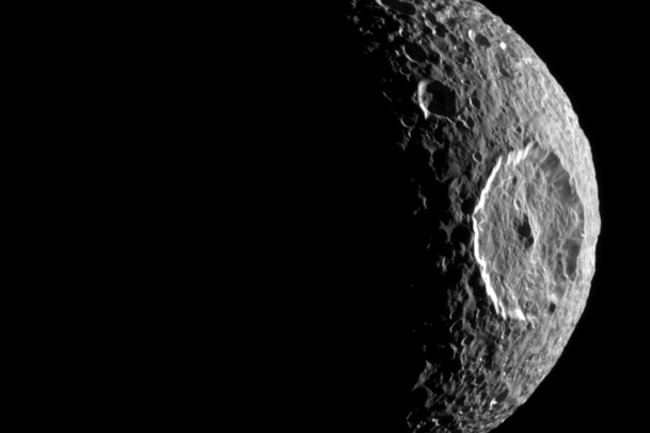 Cassini was 100,000 km (60,000 miles) from the small moon when it captured this moody image. It shows a view we can never get from Earth: a crescent Mimas, with the Sun well off to the side. The giant crater is called Herschel, and it's a whopping 130 km (80 miles) across. Whatever hit Mimas eons past was huge, and had it been any bigger, or moving any faster, the moon itself may have shattered. In fact, there's some thinking that this happens to some smaller bodies in the solar system; they can get hit so hard they do shatter, and if the event isn't too energetic the pieces can recoalesce, reintegrate. This may be why some asteroids are so low in density; they're essentially rubble piles, like bags of glass. Mimas was spared that fate those many, many years ago. What was left was an icy moon with a single brooding eye... reminding us that when we stare into the abyss, sometimes the abyss stares back.

Solar Orbiter Sets Off for Mission to Study the Sun

Here's What Happens to the Solar System When the Sun Dies