Within the Milky Way's invisible heart lurks a black hole. 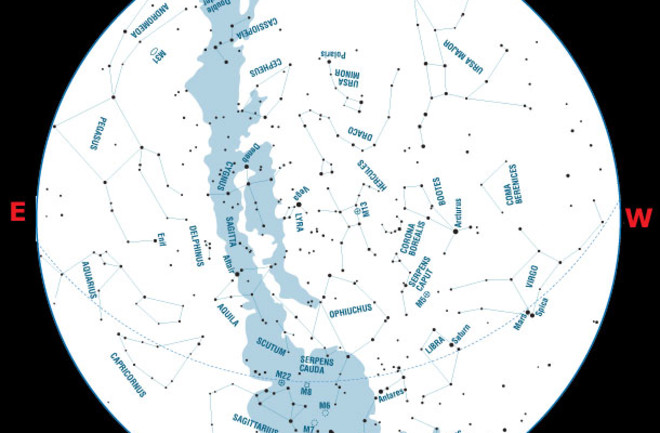 What You Can See: Our galaxy’s dust appears most prominent in the so-called Great Rift, which splits the Milky Way from Cygnus (nearly overhead in summer) to Sagittarius.

Summer is traditionally vacation season, when city dwellers escape the hustle of daily life for some rest in the country. For anyone experiencing a truly dark summer sky for the first time, one of the most impressive sights is the light of the Milky Way, the edge-on view of our galaxy from our planet’s position near its fringe. The luminous belt stretches from the southern to northern horizon and appears thickest around the galaxy’s center, in western Sagittarius.

The Milky Way is composed of billions of stars, most of them too far away to appear as individual suns. Although impressive under a dark sky, the Milky Way would look even brighter if dust didn’t block most of its light — the galaxy’s core alone would shine as bright as the full moon. Each dust particle is only about 0.1 micrometer across (roughly the size of particles in cigarette smoke), but lots of them block the 27,000 light-years between Earth and the galaxy’s center.

But within the Milky Way’s invisible heart lurks something even darker: a black hole about 4 million times as massive as the sun. Yet the black hole doesn’t take up much space. Its diameter is about 15 million miles (24 million kilometers), less than half the distance between the sun and innermost Mercury.