New research indicates the Milky Way's strange "ripples" were caused by a collision with a dwarf galaxy called Antlia 2. 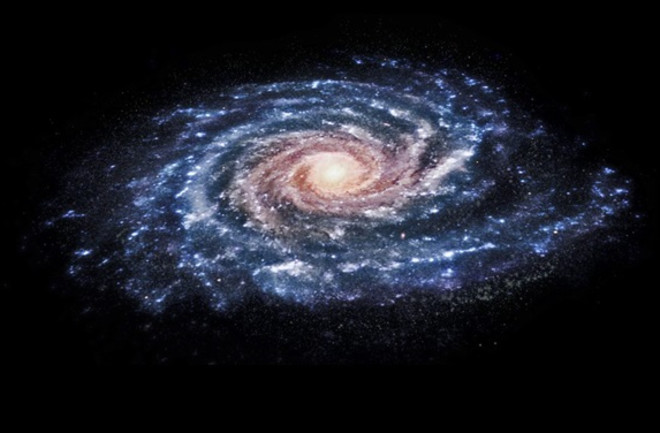 Our Milky Way, shown here in an artist’s concept, has strange “ripples” in its outlying regions. (Credit: ESA)

The Milky Way likely collided with a recently discovered dwarf galaxy called Antlia 2 less than a billion years ago, according to new research presented Wednesday at the 234th Meeting of the American Astronomical Society.

The research, spearheaded by Sukanya Chakrabarti of the Rochester Institute of Technology, supports a prediction she made a decade ago about how the Milky Way picked up a unique “ripple” pattern in its outer disk. If confirmed, researchers think the discovery will make Antila 2 an ideal natural laboratory for investigating the elusive substance known as dark matter. The work has been submitted for publication to the Astrophysical Journal Letters; a preprint is currently available.

Back in 2006, researchers revealed the Milky Way has a strange set of ripples percolating through its outer gas disk. In 2009, Chakrabarti published a study that analyzed these ripples, showing a collision between a dark-matter dominated dwarf galaxy and the Milky Way could explain how they formed.

To find the culprit, her team first rounded up the usual suspects: known satellites of the Milky Way like the Magellanic Clouds and the Sagittarius Dwarf Galaxy. However, the Magellanic Clouds are too far away and Sagittarius Dwarf has too little heft to explain the fingerprints left in our galaxy. This led Chakrabarti to predict that another dwarf galaxy — one that hadn’t been found at the time — was responsible for the galactic drive-by.

Fast forward to last year, when researchers using the second release of data from the Gaia satellite (called Gaia DR-2) uncovered a previously unknown, faint dwarf galaxy orbiting near the outskirts of the Milky Way: Antlia 2. The galaxy, which is located about 400,000 light-years away and is about as wide as the Large Magellanic Cloud, is also basically invisible. In fact, according to Chakrabarti, it’s currently the galaxy with the lowest known surface brightness (a measure of a galaxy’s light per area of the sky that it covers).

Chakrabarti set out to see whether this newly found galaxy could truly be the elusive dark matter-dominated dwarf she predicted nearly a decade ago. To test her theory, she calculated the past trajectory of Antlia 2 based on its movement and location now. Lo and behold, Antlia 2 does indeed appear to have smashed into the Milky Way in the past.

“The orbit of Antlia 2, as derived from Gaia DR-2 data, does bring it within [about 32,000 light-years] of the galactic center,” Chakrabarti said in an interview. “The outer parts of the Milky Way then show the perturbations [ripples] for about 500 million years or so.”

But just how well do the real ripples compare to those produced by a simulated collision between our galaxy and Antlia 2? “It’s almost dead on,” Chakrabarti says.

But before she and her team can be certain, though, they will need to wait for the next batch of data from the European Space Agency’s Gaia mission, which is working to map over a billion stars in the Milky Way. The new data will let researchers test their “hand-on-the-cutting-board kind of prediction,” Chakrabarti says, for how the stars within Antlia 2 should currently be moving.

If the motions line up with the predictions, it should clinch the case for Antlia 2 as the cause of our galaxy’s ripples.