The Men Who Made Space Colonies Look Like Home 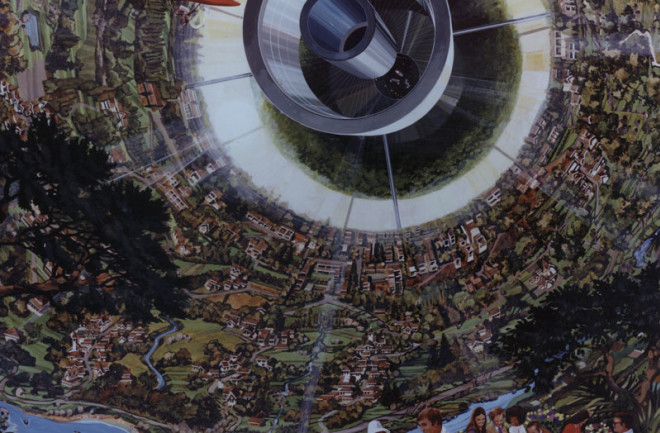 The sun shafts down on a group of cocktail drinkers, as a woman in a white dress laughs at something her camel-coated companion has said and a bartender stands at ease, wearing a faint smile. Behind the revelers, a rolling landscape of red roofs recedes uncannily toward a glowing ring of sky. Above, freed from gravity’s clutch, a man on a bicycle rigged with orange sails glides across the crescent horizon.

Stumble across the paintings of Rick Guidice and Don Davis in some dark corner of the Internet one evening, and you might think they are pages from an old pulp magazine. They were in fact commissioned by NASA forty years ago to accompany scientific reports, fleshing out what seemed, at the time, a plausible future of colonies in Earth’s orbit.

Rick Guidice was a freelance illustrator who often worked on advertisements. "We all aspired to get General Motors as a client and do these wonderful ads and publish them in the top magazines every week," he recalled recently, reached at his studio in Los Gatos, California. He painted machinery, cars, buildings—in his down time, he painted a Formula 1 race in Monaco.

Don Davis’s experience was in more otherworldly scenes. In 1968, a high schooler entranced by space, he was referred to a job program at the US Geological Survey’s Branch of Astrogeological Studies. "They were involved with background work for the Apollo program, helping map the moon and decide where the landing should take place," he says. He showed up with an oil painting of the Moon and was hired on the spot as a scientific illustrator.

The two would be part of a dream that blossomed in the fertile imaginations of the post-Apollo era—and, for all intents and purposes, died within a decade. But for a brief moment, that dream looked like it would propel humanity spaceward.

A home for the millions

In the mid-1970s, NASA began to give grants to a Princeton physics professor named Gerard O’Neill. O’Neill was convinced that building colonies that orbited the Earth was the best way to harvest the mineral riches of asteroids and provide a home for the burgeoning millions of Earth. The colonies would trail behind the moon, a location where they would not need to expend any fuel to stay aloft. On them would be vast manufactories of solar arrays that, released into space, would beam power back to Earth in the form of microwaves, justifying the colonies' expense. For a few years, O'Neill's ideas spread like wildfire through a certain set of forward-thinkers in science and the media.

In 1975, O’Neill spearheaded a ten-week-long study at NASA Ames Research Center in Mountain View, California, working with engineers, social scientists, and other researchers, as well as architects, to see whether such structures were feasible. Their final report describes several possible colony types, such as the Bernal Sphere, in which the landscape is smeared across the interior of an enormous globe, and which generates its own gravity using centrifugal force. A cylindrical colony, in which a twenty-mile long tube was lined with human habitations, also made the cut, as did toroid colonies, shaped like immense hula hoops. With the extension of current engineering, the study participants concluded, it was possible that such things could be built and sustained as early as 1990.

Someone at NASA got in touch with Davis and Guidice, who had each worked on other illustrations for the agency in the past, about illustrating the report. Soon they were receiving sketches, technical specs, and explanations from O’Neill.

The rolling hills behind the cocktail drinkers and sky-cyclist in Guidice’s painting of a Bernal Sphere are in many of the interior paintings. Sometimes they are laced with cypresses, delicately rendered in acrylic paints; other times thin fir trees rise in ranks toward a horizon line that recedes around a toroid’s bend. In one of Davis’s, a family wades in a stream high above a bay traversed by a slender suspension bridge. Through a miles-long window fitted with a mirror to reflect in daylight, distant agriculture pods spin in a halo around the colony’s cylinder.

O’Neill helped inspire this idyllic scenery. "He wanted to replicate an English countryside," Guidice says. "He wanted it to be very rural farmland." Davis recalls a similar conversation: "You go to Sausalito, on the San Francisco Bay, and you see the boats down below, and the green hills around you and the water and the city stretching out ahead of you—that was the impression he shared with me." All three knew that colonies would almost certainly look more like shopping malls than countryside, at least at first. But to inspire viewers, they would need a romantic depiction.

The romance was not just in the paintings. The 1975 report, available on NASA’s website, peppered technical descriptions with episodes from an imagined visit to the colony. The style is familiar to anyone who’s read the utopian literature of the mid-twentieth century—Ecotopia and Walden Two, especially. In one aside, a colony leader explains to the visitor, over a lunch of chicken, peas, rice, and apple pie produced from on-colony agriculture, how the society functions:

The colony experiences the egalitarianism of a frontier reinforced by the esprit of a group of people working together with a sense of mission on a common task. His face glowed with enthusiasm as he declared that this spirit, more than heroic adventures or romanticized challenge, is what makes the colony a rewarding place to live...

He excuses himself, saying he has a meeting of the "elders" to attend.

Space colonies didn’t always meet with a glowing reception, though. The same year that People magazine profiled O’Neill, he appeared on "60 Minutes" to discuss his work, and his NASA funding.

Watching the program was Senator William Proxmire, a Wisconsin Democrat with a seat on the Senate Appropriations Committee. He would soon grow famous for his Golden Fleece awards, which he gave out to government-funded projects he perceived to be wasteful, including an elaborate FAA study on the body measurements of 432 airline hostesses and studies on the effects of alcohol on rats.

The very next day, Proxmire wrote a letter to the administrator of NASA, Robert Frosch, requesting a list of all NASA expenditures towards the goal of space colonization. "I would be particularly interested in a yearly breakout of such funding coupled with a justification for each expenditure based on NASA's priorities and goals," he wrote.

Another letter, sent by Proxmire to the producers of "60 Minutes" and featured on the next episode, was more explicit about his feelings. "It's the best argument yet for chopping NASA's funding to the bone I say not a penny for this nutty fantasy."

Frosch’s reply, preserved in NASA’s archives, argues for considering the space colony studies under the heading of "long-range studies":

"Such activities are intended to provide the knowledge required to assess technical feasibility of possible space projects to support the planning of science and technology research. This process of evaluating potential future options has proved to be a most effective technique for understanding alternatives, establishing priorities, and providing the basis for informed judgment on important issues."

Whatever the reason, NASA’s later grants to O’Neill, which continued till around 1980, according to Patrick McCray, a historian whose recent book includes chapters on O'Neill, tended to focus on his work on a mass propulsion system—potentially suitable for getting things up into orbit, but not explicitly space-colony-related. O’Neill continued to advocate for the colony idea. Even today, twenty years after his death from leukemia, there are parts of the Internet where people argue that this idea could still make a comeback, that the future of humanity lies in orbit. But what seemed just over the horizon when we’d recently put men on the Moon is harder to imagine now, in this age of decreased public funding for space flight.

Today, Don Davis lives in Palm Springs, CA, where he works on animations for shows about space. He began to work with celebrated astronomer and science advocate Carl Sagan in the 1970s, making the painting on the cover of Sagan’s The Dragons of Eden and winning an Emmy as part of the team behind the sets and visual art of Cosmos.

Rick Guidice lives in Los Gatos, CA, and has transitioned into architectural design full-time. Right now, he’s working on a winery project, with three great caves built into the hills.

Some of the colony paintings hang in the Ames Research Center lobby. Others are nowhere to be found Davis says there is at least one that he has lost track of, though he still has photographs. In the digital versions, available on a NASA site, the fine details of O’Neill’s dreams are still visible, but they evoke a sense now of the past rather than the day after tomorrow. The woman in the white dress has an Afro; the houses have a blocky, Whole-Earth-Catalog look. It’s the antique future.

It’s hard to believe, now, but did such colonies really seem possible, back then?

Davis laughs, as if he’s heard such incredulity before. "Gerry O’Neill was very matter-of-fact minded. He was not a far-away dreamer at all. His mathematics and knowledge of processes involved tended to make the idea very convincing as you discussed it in detail with him." Guidice recalls: "He was very pragmatic and very realistic too about the whole thing, and how the concept fit into reality."

"In the context of the 70s, when we had some sense of momentum from Apollo as far as expanding the human presence in space, it seemed like the kind of thing we could have just picked up and moved with," Davis says. "And it’s still possible. It’s just a matter of where we decide to spend our money."

But Guidice remembers a more telling prophecy from O’Neill. "One of the most memorable things I ever heard him say was, ‘If we don’t do it right now,’ meaning in the next 20 years, and that was 20 years ago, ‘then we’ll never do it, because we’ll be overpopulated and the strain on the natural resources will be the number one priority. We will not have any sort of inclination to see this through.’"