The Many Resurrections of the Hubble Space Telescope 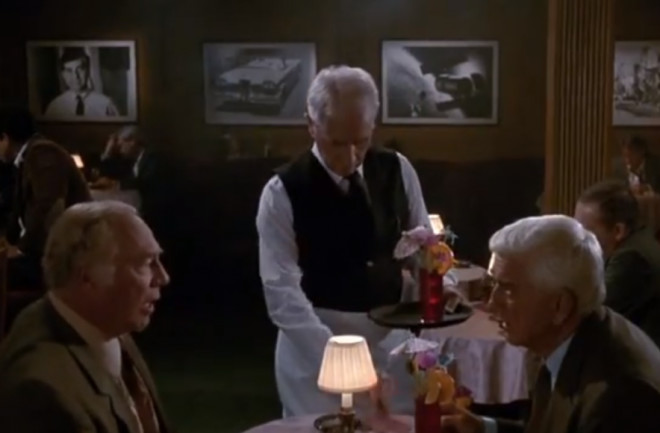 Laughing stock: In the 1991 comedy Naked Gun 2 1/2, the Hubble Space Telescope (top right, on the wall) was depicted as a disaster on par with the Edsel, Michael Dukakis, and the Titanic. If you are old enough to remember news stories from 1990 (or if you are a devoted student of astronomy), you'll recall that the Hubble Space Telescope was not always regarded as the technological triumph that NASA is loudly celebrating today, on its 25th anniversary. The orbiting observatory debuted as a king-size disaster: the telescope that couldn't see straight, built with a mirror that was ground perfectly...but perfectly incorrect. The story of how the error was discovered and ultimately fixed has been told many times, most recently in a beautiful retrospective by my colleague Ian Sample at The Guardian. But today it is hard to appreciate the magnitude of Hubble's turnaround--the depth of the scientific despair right after launch, and the many resurrections that transformed Hubble into the most famous and productive observatory in history. Since Hubble may not live to celebrate a 30th anniversary, there is no time like the present to tell the tale. The Unbelievable Truth Astronomers knew there was something wrong with Hubble from the moment they saw the first data downloads. It was obvious even in the so-called first light snapshot that NASA unveiled on May 20, 1990. That image, showing a section of star cluster NGC 3532, should have presented a set of crisp dots of light. Instead the stars are notably blurred and distorted. Mission scientists were in denial at first, assuming (or hoping) that they were dealing with a simple problem of fine-tuning Hubble's optics. The reality was initially too shocking to grasp.

First public image from Hubble showed obvious flaws, but NASA scientists initially could not accept the severity of the problem. [Credit: NASA/ESA/STScI]In retrospect, the NASA press release accompanying the first-light image reads like a mixture of farce and tragedy, bragging about the quality of the image (without acknowledging its readily visible flaw) and applauding the sharpness of the view "even at this early stage of the focusing task." Behind the scenes, though, the Hubble team was finding that their focusing adjustments did not help, because the problem was built directly into the telescope's 2.4-meter primary mirror. It is a tribute to Hubble's optical engineers that once they understood the true severity of the blunder, they almost immediately recognized ways to correct it. By the time NASA held a press conference on June 27, 1990, acknowledging the problem, Hubble chief scientist Ed Weiler insisted that "we are deferring science, not canceling science." He was frustrated and embarrassed but, by this point, confident that his claim was truthful. NASA had designed Hubble so that it could be serviced and upgraded by astronauts aboard the Space Shuttle. That meant the telescope could also be repaired--assuming the engineers could figure out what the repairs should entail. In the case of Hubble's signature wide-field camera, it was soon clear that the fix meant installing a whole new camera containing corrective optics. For Hubble's other instruments, the problem was more complicated. Unlikely as it may seem, the solution emerged in a Hollywood-style flash of inspiration that took place while engineer James Crocker was taking a shower. He realized that a set of optical adapters (mounted on arms resembling the controls on a European shower) could intercept light beams and reshape them before they entered Hubble's three other primary instruments, restoring them nearly all of their function.

Erupting star system Eta Carinae is a confusing mess in the 1991 Hubble image; only after the fix did the telescope reveal the complex system of gas and dust. [Credit: NASA/ESA/Jon Morse] Even as the Hubble team grew increasingly confident about these solutions, they had to face the hard reality that NASA would not be able to send a service mission to the space telescope until 1993. That left three long years to salvage good science out of Hubble's impressive but distorted data--and three long years to convince the public that NASA was not a bunch of bumbling fools who just spent $1.5 billion on a telescope that could not even take clear pictures of the stars. Make no mistake, the public attitude toward NASA was poisonous during that time. The Hubble telescope was the butt of caustic cartoons, late-night monologue jokes, and Congressional ridicule. The movie Naked Gun 2 1/2, released in 1991, contained a satirical scene set in a bar that featured photographs of famous disaster on its walls. The Hubble Space Telescope was there, right alongside the Edsel, the 1906 San Francisco earthquake, and Michael Dukakis. The scientific attitude toward Hubble was more generous, but not by much. In off-the-record conversations at the time, several prominent astronomers told me that the money lavished on Hubble was a waste, and would have been better spent on new telescopes on the ground. Members of the Hubble team worked feverishly on computer image-correction algorithms to extract more value from Hubble's images, which required considerable additional effort and still did not match the originally intended results. NASA's PR machine engaged in awkward contortions to put the best possible spin on the situation. In 1991, when NASA released a Hubble movie of a huge storm on Saturn, the agency acknowledged the issue with a weak boast: "Each of the 24 frames was processed to largely remove instrumental artifacts and the effects of the HST spherical aberration." I remember going through similar contortions covering the story for Scientific American (where I was an editor at the time), trying to honor NASA's heroic efforts without ignoring the egregious error that made those efforts necessary in the first place.

Jupiter's aurora contains spots that are the magnetic "footprints" of Io and its other giant satellites. Such details were utterly invisible in Hubble's pre-service image. [Credit: NASA/ESA/John Clarke] The Resurrections and the Rehabilitation As we know now, the 1993 service mission was a huge success, giving Hubble the clear vision it was built to achieve and initiating a remarkable 22-year run of incredible science and breathtaking images. The latter were essential to redeeming the space telescope in the public eye, but they were equally crucial in selling it (or rather, re-selling it) to a skeptical scientific community. Just as Hubble's disgrace was held in public, so was its rehabilitation, which played out through a series of press conferences and media releases.

After 1993, NASA suddenly confessed openly about Hubble's initial flaws. [Credit: NASA]There is a notable sense of catharsis in the first few sets of images that NASA issued after the 1993 fix. At last, the Hubble team was allowed--even encouraged--to admit how compromised Hubble's images had been. The before-and-after comparisons took on the tone of a bad weight-loss infomercial, emphasizing the sheer awfulness of the "before" in order to heap praise on the "after." Now NASA could cite the "dramatic improvements" that came with the optics upgrade. A 1993 press release heaped scorn on a pre-repair image of the 30 Doradus nebula: "It is very hard to do quantitative measurements on such an image because of the way the light from many stars overlaps." Today the story of Hubble's repair feels like dredging up ancient history, which the truest possible testament to the mission's success. NASA fixed not only Hubble itself, but also the telescope's image in the public and professional communities. Perhaps no single picture did more in that regard than the iconic 1995 Pillars of Creation view of the Eagle Nebula, a visually and scientifically stunning look at how stars are born and emerge from their gaseous cocoons. But there is more to the story of Hubble's resurrection, much more. Crucial though the 1993 repair mission was, it merely salvaged Hubble's reputation; it did not secure it. What has made Hubble such a lasting success is its continued evolution. Every instrument aboard has been replaced and drastically upgraded. The new wide-field camera and corrective optics package (called COSTAR) are themselves long gone, swapped out for better instruments. Over the course of three additional service missions, Hubble has been rebuilt from the inside out. The telescope orbiting Earth today is a totally different instrument than the one launched in 1990. The primary mirror is the only major element that remains the same.

Globular cluster 47 Tucanae, a dense ball of a million stars, looked drastically different to 1991 Hubble than to its 2013 version. Today's Hubble is, in essence, a completely different telescope. [Credit: NASA/ESA/DSS] Hubble's new instruments pushed its vision into the infrared wavelengths needed to study galaxies in the extremely distant universe; allowed the kind of fine spectroscopy needed to study the properties of planets around other stars; and provided the high-resolution, high-sensitivity imaging essential to mapping gravitational lenses and indirectly tracing the distribution of the universe's invisible dark matter. In short, Hubble's most outstanding scientific successes have come from observations that lay beyond the capabilities of the original telescope, even if it had functioned perfectly right out of the box. It took four service missions--four different resurrections--to make Hubble the scientific triumph we know today. One of the most surprising perspectives on Hubble's evolution comes from Massimo Robberto, an observatory scientist at the Space Telescope Science Institute. Reflecting back on the ridicule heaped on the buggy Version 1.0 of Hubble, Robberto zeroes in on a cartoon by Ralph Dunagin. Although the cartoon is nominally one more jab at Hubble's failure, it centers on the scientists trying to come to terms with the problem and wondering, absurdly, if maybe the fault lies in the stars, not in the telescope itself.

The cartoon Dunagin's People offered a surprisingly insightful take on the Hubble fiasco. [Credit: Orlando Sentinel]As it turned out, Hubble was not what we expected, but the universe was not what we expected either. Hubble has been hard at work collecting data on planets around other stars and measuring the properties of dark energy, two things that were utterly unknown when the telescope launched. And as Robberto points out, Hubble was out of focus but the universe is out of focus, too, full of regions where gravity warps and bends the light of distant galaxies. Dunagin's absurdity was not so absurd after all. That is perhaps the final and strangest resurrection of all: In forcing astronomers to keep revising the way they look at the cosmos, Hubble has forced them to revise the way they think about it as well. For breaking science news, follow me on Twitter: @coreyspowell