The Many Mini-Moons of Planet Earth

To human eyes, there's only one Moon. Look more closely, and it turns out we have a large, ever-shifting family of satellites. 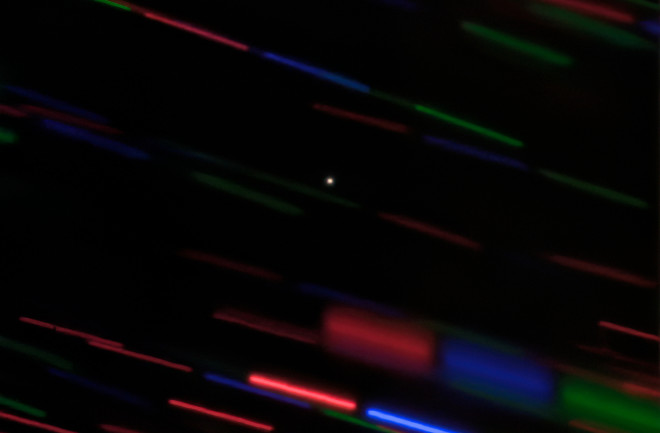 Earth's new minimoon, catalogued as 2020 CD3, shows up as a dot in this image from the Gemini Observatory. Tracking the object as it moved turned surrounding stars into colored streaks. (Credit: Gemini/OIR/AURA/G. Fedorets)

If you have clear skies this evening, look up and you will see the Moon—a solitary Moon, the same one that has lit Earth's skies for billions of years, circling our planet with clocklike precision. Look up with the vision of the Catalina Sky Survey, though, and you will see something entirely different.

The space around us is less like clockwork than it is like the ebb and flow of ocean currents, as small asteroids wander our part of the solar system in ever-shifting paths. They wander in response to the pressure of sunlight and to subtle gravitational perturbations: sometimes drifting close to Earth, occasionally making an impact, and every once in a while becoming trapped by our planet's gravity.

When option #3 happens, Earth gets a temporary new moon, a mini-me companion to the big one that we simply call "the Moon." That's what happened about three years ago, when Earth acquired its current minimoon, the object currently known as 2020 CD3.

Discovery image of the minimoon 2020 CD3, taken by Teddy Pruyne and Kacper Wierzchos at the Catalina Sky Survey on February 15. (Credit: Pruyne/Wierzchos/CSS)

2020 CD3 was discovered on February 15 by two astronomers working with the Catalina Sky Survey, Kacper Wierzchos and Teddy Pruyne. At the time it was about 300,000 kilometers away, slightly closer than the regular old Moon, but was very faint because of it is so small—an estimated 2 to 3 meters wide, or about the size of a cow. (This one jumped under the Moon, however.)

What should we call this little companion? For what it's worth, I ran a Twitter poll and the clear winner was "Luna 2: Electric Boogaloo." For simplicity, I'll call it Luna 2 here. Certainly that is a clearer and more memorable name than 2020 CD3.

It's slightly possible that Luna 2 is an artificial object, a wayward piece of space junk that has belatedly returned home. That has happened before; for instance, a rogue satellite spotted in 2017 turned out to be a rocket booster from a Chinese lunar mission. So far, the motion of Luna 2 is most consistent with a dense object, though, making it likely that it truly is a captured, rocky asteroid.

If so, Luna 2 helps settle a centuries-old question about whether Earth has more natural satellites than just the Moon. Every other planet with moons has more than one. Even little Mars has two, and Jupiter has 79! Why just one for Earth?

In 1846, the French astronomer Frederic Petit claimed that he had observational evidence of a second moon circling just 11 kilometers above Earth's surface. That sounds crazy now—such an orbit would decay immediately due to intense atmospheric drag—and it sounded pretty crazy then, too. Nevertheless, Petit's report got enough media attention at the time that Jules Verne incorporated the idea into his novel From the Earth to the Moon.

Another dubious sighting of a minimoon circling the Earth came in 1898 from German astronomer Georg Waltemath, along with even more questionable reports in the decades following. Even Clyde Tombaugh, the dogged observer who discovered Pluto, got into the game, spending four years in the 1950s searching fruitlessly for an undiscovered moonlet.

Over the years there have also been reports of faint patches of debris (sometimes called "dust-cloud moons") that share the same orbit as the Moon but circle the 60 degrees ahead of and behind it, in stability zones known as Lagrange Points. A recent report by a Hungarian research team makes a pretty good case that the dust clouds really exist, though even if they are real they are extremely tenuous and they hardly seem to qualify as moons.

The real breakthrough came in 2006, and from a familiar source: the Catalina Sky Survey. Using the Survey's 0.7-meter Schmidt camera, Eric Christensen discovered an object called 2006 RH120 in orbit around the Earth. It was small, similar in size to Luna 2, and at first seemed like it might be an old piece of NASA's Apollo hardware. Further examination indicated that 2006 RH120 probably had a natural origin, and two years later it was given an official designation as a near-Earth asteroid

The long search was over: Earth had a second moon.

Or rather, Earth temporarily had a second moon. Captured objects like 2006 RH120 tend to be weakly held by Earth's gravity, and easily disrupted. In June of 2007, a gravitational interaction with the Moon freed the minimoon from Earth-orbit and sent it back into a more normal, asteroid-like orbit around the Sun. Earth returned to single-moon status for another decade until Luna 2 was captured, probably sometime around 2017.

Like 2006 RH120, Luna 2 is considered a "temporarily captured object"—a transient moon. It is not possible yet to predict exactly when it will move on, but its looping orbit (which ventures out more than four times as distant as the Moon) is so weakly bound to the Earth that an eventual escape is inevitable.

This pattern of catch-and-release must be happening all the time, as the ebb-and-flow of small asteroids continually washes past the Earth. The Vera C. Rubin Observatory, which will begin operation early next year, is designed to find exactly those kinds of dim, fast-moving objects. According to a recent study led by Grigori Fedorets of the University of Helsinki, the observatory should be able to find at least one new minimoon a year, and perhaps even a half-dozen a year with a more determined search.

If Fedorets is right, Luna 2 will soon lose some of its exotic status, but astronomers will begin to learn a lot more about this enigmatic population of miniature moons: how many of them are, where they come from, and where they go. That last part is especially relevant, since not all minimoons go gentle into that good night. Two recent fireball meteors—one over Europe in 2014, one over Australia in 2016—followed paths suggesting they had previously been in orbit around the Earth. Instead of drifting off, they slammed right into us. Good thing these minimoons are so mini.

Minimoons might also prove useful for space exploration someday. They would be intriguing destinations for human exploration: a way to visit an asteroid without needing to travel any farther than the Moon. They would also be attractive targets for fast, low-budget robotic space probes. And they are logical places to run early experiments with asteroid mining, since tests could be sent up and retrieved there much more quickly (and using much less propulsion) than would be possible for a mission into the asteroid belt.

With those ideas in mind, a team led by Steven Brelsford of the University of Hawaii recently conducted a study of how to rendezvous with Earth's minimoons. Luna 2 will probably be long gone before anyone is sending a spacecraft there, much less a mining mission or a crew of astronauts, but there will be plenty of other potential targets. Now that we know how to look, it's clear that Earth has plenty of moons to go around.