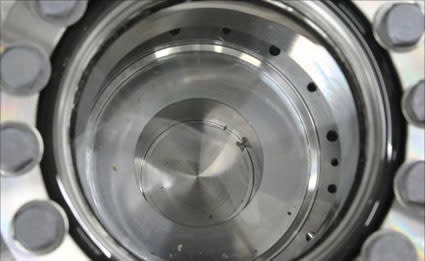 Seven years after launch, Japan's Hayabusa researchers can finally celebrate their success: The little asteroid probe has, really and truly, succeeded at its mission. Researchers announced that the probe's payload capsule, retrieved in June, contains dust from the asteroid Itokawa that the probe visited in 2005. Not only did it travel four billion miles with only one rest stop (becoming the first spacecraft to land on and lift away from an asteroid!), it also collected a sample of the asteroid dust and shuttled it back to earth three years after its scheduled landing date. It accomplished all this despite an instrument malfunction during the crucial sample collection maneuver, and serious engine trouble throughout the mission. After analyzing more than 1,500 particles using scanning electron microscopes, researchers have announced that almost all of the specks of rock and dust (pictured here in the capsule) are of extraterrestrial origin. That's a relief to scientists who feared that the dust might be earthly contaminants.

Tell-tale signs came from the composition of the minerals olivine, pyroxene, and plagioclase in the grains, which were very different to the compositions seen on Earth, explained Trevor Ireland, an Australian scientist who was involved in the preliminary investigation of Hayabusa’s returned sample after its capsule was recovered in Woomera in June. The mineral troilite (iron sulfide) was also spotted – which is not seen on Earth, but is common in chondrites (ancient stony meteorites). [Nature]

The composition of the dust helps us confirm what we though we knew about these asteroids. Itokawa is a little over 500 yards wide, peanut-shaped, and is identified as an S-type asteroid, which means that it is made up of stony materials left over from the solar system's early days.

Asteroids are like time capsules. The condition and composition of the materials that they are made of haven’t changed much since the time of their birth billions of years ago. By studying what asteroids consist of, scientists could obtain invaluable information on heat and various other conditions at the very early stage in the development of the solar system, according to a JAXA spokesman. [Wall Street Journal]

Bad Astronomy: Video of asteroid near miss from this morning