The International Space Station Has A Tiny Hole 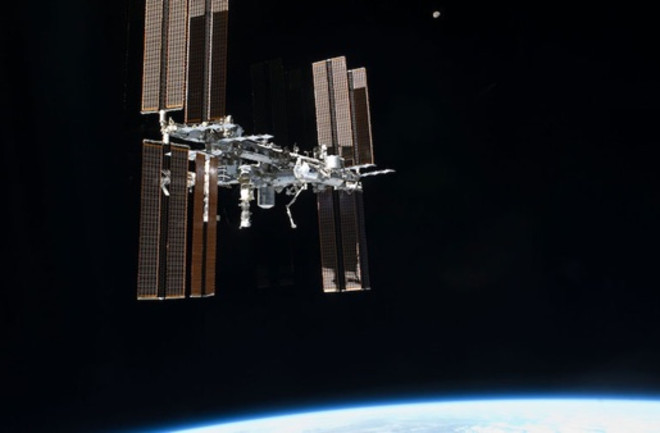 The International Space Station orbits some 250 miles above Earth’s surface, and is routinely exposed to impacts by tiny, fast-moving objects like paint chips, often leaving marks on the outside of the station’s hull. (Credit: NASA/JPL-Caltech)

Early this morning, NASA announced the International Space Station — one of the most expensive and complex structures ever built — is slowly leaking air out of minuscule hole just 2 millimeters wide. Although the astronauts aboard are not currently in danger, this is the first time the nearly 20-year-old orbiting laboratory has experienced any potentially hazardous damage.

Flight controllers first recognized the leak on Wednesday night at about 7 p.m. EDT, but they determined it was so small it posed no immediate threat to the six astronauts aboard the station, opting to let them sleep as normal. When the crew awoke this morning, mission controllers both in Houston and outside of Moscow attempted to pinpoint the leak. All six astronauts joined in the hunt, closing off individual modules within the station to better locate the source.  After an extensive search, the crew traced the leak back to the crew capsule of the Russian Soyuz MS-09 spacecraft, which shuttled three astronauts to the station in June. Although European Space Agency (ESA) astronaut Alexander Gerst initially plugged the leaking hole with his thumb, temporarily stabilizing the pressure, the hole was eventually covered with Kapton tape, which is often used in spacecraft due to its ability to function across a very wide range of temperatures.

Both American and Russian mission controllers, as well as all six astronauts, are still attempting to permanently seal the leak. As of 11:39 a.m., according to Stephen Clark’s live blog for spaceflightnow.com, “Russian mission control wants the crew to use a wipe saturated in sealant to plug the tiny, 2-millimeter opening on the hull of the Soyuz spacecraft’s orbital module.”

However, the amount of air being lost continues to fluctuate, and if the hole is not entirely patched in the next few days, some crew members may need to depart the station and return to Earth earlier than planned. (The Soyuz spacecraft’s orbital module is not required for reentry into Earth’s atmosphere.)

Some news outlets are reporting that a tiny, speeding piece of space junk, or perhaps a micrometeorite, struck the station, though no official cause has been determined yet. These strikes are not unheard of. In fact, in 2016, ESA astronaut Tim Peake captured a 7-millimeter-wide chip in one of the stations windows. At the time, Peake said “I am often asked if the International Space Station is hit by space debris. Yes — this is the chip in one of our Cupola windows, glad it is quadruple glazed!”

The ISS has a price tag of around $150 billion. But although the most expensive real estate on Earth comes with plenty of space (as in square footage), the ISS is a claustrophobic’s nightmare. The free-falling research laboratory is a labyrinth of individual rooms only accessible by squeezing through tight corridors. And last month, Russian cosmonaut Oleg Artemyev took the internet on a tour through the ISS, showing just how snug the station really is.

According to NASA’s mission summary, the goal of Expedition 56, which runs from June 2018 through October 2018, is to carry out research “focused on navigation, microbiology, physics, and a variety of other sciences.” This includes identifying how microbes grow and replicate on the ISS, studying how atoms behave in the extreme conditions of space, and testing navigational techniques that may be beneficial for future, deep-space missions.