The Indonesian Island of Sulawesi Is an Evolutionary Puzzle

Caves and ancient artifacts in this South Pacific hotspot for archeology could hold secrets about early human origins and expansion. 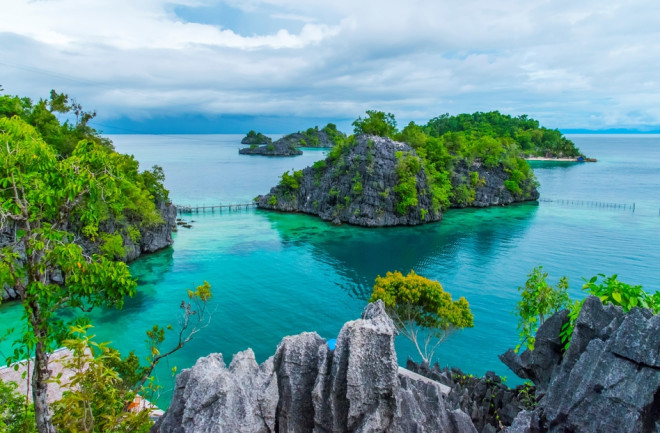 Sprawled across three different continental plates and contorted like an odd starfish, Indonesia’s Sulawesi island is home to a bewildering range of creatures — including more than 100 mammals found nowhere else on Earth. As the world’s 11th largest island, it also seems to have played a central role in humanity’s journey across the planet.

More than 45,000 years ago, people were making art here. Mysterious stone tools have been found in sediments dating back around 200,000 years. And the island was, more than likely, a key stepping stone in human expansion to Australia.

Compared to the Asian mainland, Sulawesi would have been a remarkably easy place to live, says Adam Brumm, an archeologist at Australia’s Griffith University who has excavated extensively on the tropical island.

“Coming from part of mainland Asia, where there are tigers and all sorts of other dangerous predators, once you get to Sulawesi, there’s no predators larger in size than a civet cat,” he says. “You’ve got a relatively high number of animal species that you’re able to hunt … Potentially it could have been a really optimal or productive environment.”

And hominins seem to have reached the island relatively early. Stone flakes and cores have been found around Cabenge in southern Sulawesi, and tools found at a nearby site, Talepu, date back at least 118,000 years and are probably considerably older. It’s still unclear who made these tools. Candidates run from the Denisovans, the mysterious people discovered in Siberia, to Homo erectus, an early human ancestor, and Homo floresiensis, the miniature early human dubbed the “Flores hobbit.”

Read More: Did Real Hobbits Ever Exist? The Question Isn't As Crazy As It Sounds

But other possibilities exist. “We’ve already got these exciting, bizarre, flamboyantly endemic hominin species from Flores, to the south, and from the Philippines, to the north,” Brumm says. “So we suspect there could also be some bizarre little hominin on Sulawesi, as well, that we just haven’t found any evidence for.”

The art found within the island’s extensive karst landscapes has captured the most attention. In one of these areas, a 175-square-mile expanse known as the Maros-Pangkep karst, Brumm and his colleagues have dated a painting of a Sulawesi pig species to at least 45,500 years ago.

He’s even more excited by a painting of a warty pig at a site called Leang Bulu Sipong 4, that’s at least 43,900 years old. “That animal painting is part of a larger scene and narrative composition, which, as far as we can tell, depicts a series of part-human, part-animal creatures hunting warty pigs and dwarf bovids, using spears or even ropes,” says Brumm.

This seems to be not only the earliest evidence of a picture story anywhere in the world, but the first known depiction of creatures that could only have come from human imagination. “We suspect this is part of some mythological narrative, related to the beliefs of these early people,” he says.

Considering the focus of the art pieces, Brumm believes that early humans on Sulawesi may have had a spiritual connection to the island’s unique fauna, particularly wild pig species. The Sulawesi bear cuscus, a tree-dwelling marsupial unique to the island, also seems to have played a symbolic role. “I think there was some form of connection with the cuscus, in the sense that we find the drilled finger bones used as a necklace or an ornament of some kind,” he says.

The route to Australia

When sea levels were lower during the last ice age, Australia, New Guinea and Tasmania formed a single landmass known as Sahul. Modeling suggests that a route passing through Sulawesi would have been the easiest way for humans to reach Sahul and what is today Australia — not least because each island along the way would have been visible from the preceding spot.

“We’re fairly sure that our species had already established itself in Australia by 65,000 years ago,” Brumm says. “So there is a possibility that we have modern humans first arriving in Sulawesi at least 65,000 years ago.” It’s likely that more very ancient art remains to be discovered — or simply to be dated.

A further tantalizing possibility remains to be explored: “Based on the genetic makeup of modern people in Australia, in Aboriginal Australians and Melanesian populations in particular …  we find the genetic legacy of the Denisovans,” Brumm says. “So for understanding the nature of interactions between the Denisovans and our species ... I think research on [Sulawesi] could throw up some really surprising discoveries.