The Hottest Science Experiment on the Planet

In a Long Island lab, gold particles collide to form a subatomic stew far hotter than the sun. 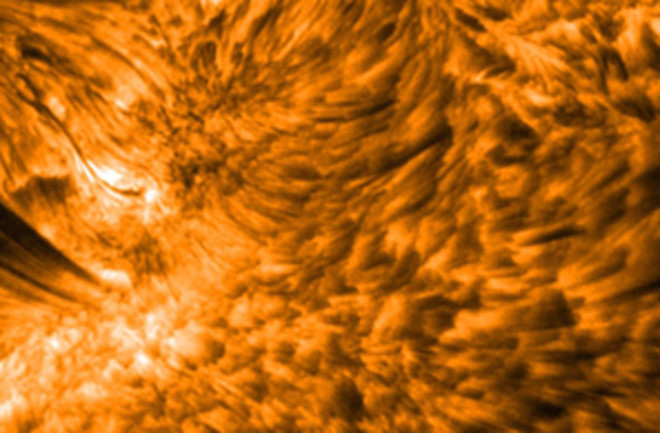 A 27,000 mile-wide patch of sun shows a forest of plasma jets and loops. | Institute of Solar Physics for the Swedish Academy of Sciences

Rocking the thermometer at 4 trillion degrees Celsius, a subatomic soup that might reflect the state of matter shortly after the Big Bang has set a new world record: It's the hottest substance ever created in a lab. The previous record, recorded at Sandia National Lab in 2006, was a balmy 2 billion degrees Celsius. The core of the sun burns at a chill 15 million degrees.

The uber-hot brew is created at Brookhaven National Laboratory on Long Island. The lab's Relativistic Heavy Ion Collider, RHIC, accelerates gold particles to nearly the speed of light before slamming them together to see what they're made of. When the energy of the colliding gold particles is transferred into heat, the temperature soars. Scientists with the Pioneering High Energy Nuclear Interaction eXperiment, PHENIX, who took the temperature measurement, announced a value of 4 trillion, but that's only an average over the lifetime of the substance. At its hottest stage, the infusion may reach 7 trillion degrees Celsius.

"Matter as we know it shouldn't exist at that temperature," says PHENIX Spokesperson Barbara Jacak. And from what they can tell, it doesn't really. The protons and neutrons making up the gold nuclei appear to melt in the intense heat, and leave behind porridge made of the subatomic particles quarks and gluons. Jacak describes the resulting substance as "a liquid-like plasma."

But those words can't really describe the nature of the soupy mess. Nothing can, yet. Particle physicists, cosmologists, and even string theorists are all trying to understand why quarks and gluons, the building blocks of protons and neutrons (which in turn build atoms), behave this way at such high temperatures. Why doesn't the mixture turn into a gas, like water turns to steam at 100 degrees Celsius? How hot would it have to be to vaporize? And if the universe was filled with this liquid goop shortly after the Big Bang, how did it eventually turn into stars, planets, and people?

"We get giant discussions and even some vociferous arguments," says Jacak. "The big question for us is what is going on inside [this substance] and how does it work. On the experimental side we're trying to measure its properties, and one of the first properties you could measure is its temperature."

It sounds simple enough, but PHENIX scientists have been working on this task since the construction of the experiment ten years ago. Taking the temperature of a subatomic plasma that lives in the wreckage of a gold particle collision turns out to be extremely difficult (which is why Jacak says it's possible that other experiments have created even hotter substances, but might have no way to measure them).

Potters know that in the belly of a kiln, a piece of clay will change color as it heats up: First it's a warm red, then a brilliant yellow, and finally a blinding white. It's the photons coming off the clay that reveal the temperature, and PHENIX scientists relied on the same principle to measure the temperature of the plasma. The problem is, those photons (which are too high-energy to be seen by human eyes) are lost in the shower of photons created by the gold particle collision. The task was not so much like pulling a needle out of a haystack as it is like finding a single non-descript piece of hay in the entire barn. PHENIX's breakthrough analysis not only represents a new world record, but new possibilities for understanding the universe.

Long Island residents might be wondering how PHENIX doesn't burn a hole in the Earth with their flaming concoction, or if the group could harness the heat to run a generator. But the substance only exists for one trillionth of a trillionth of a second, and is smaller than a single atom. Nonetheless, trying to conceive of just how hot that tiny drizzle of particle goulash gets is enough to fry your brain.