For generations, astronomers have dreamed of building telescopes on the lunar farside. 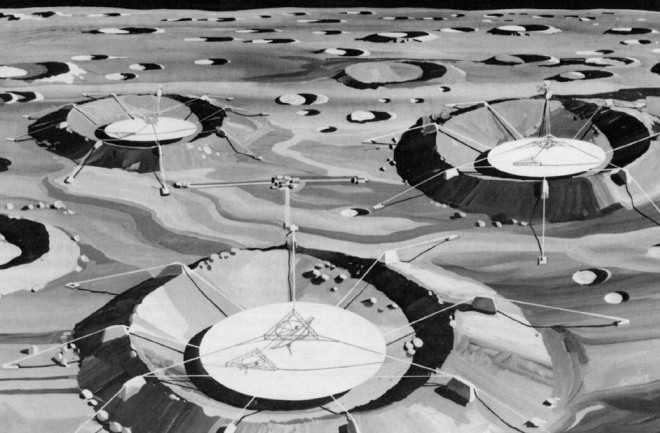 A decades-old idea from lunar scientist Richard Vondrak, who worked at the Apollo Science Operations Center during the moon landing program, proposed using lunar craters to build radio telescopes like the Arecibo Observatory in Puerto Rico. Here, an artist’s concept shows how three telescopes could be used separately or combined to create a giant instrument. (Credit: Courtesy NASA)

For radio astronomers, Earth is a noisy place. Many modern electronics leak radio signals, which interfere with the long, faint wavelengths of light studied by radio observatories. And for decades, this invisible light pollution has pushed radio observatories deeper into so-called “radio quiet zones.” This forces radio astronomers far from other people, out to places like the barren Atacama Desert in Chile.

But it’s not just human-made devices that obstruct faint radio signals. Natural phenomena from Earth and the sun can interfere, too. Adding insult to injury, Earth’s ionosphere — where solar radiation ionizes molecules in our upper atmosphere — blocks the longest radio wavelengths from reaching our planet’s surface at all.

Scientists have long eyed a solution: the farside of the moon. Because it always faces away from Earth, a radio telescope placed on the lunar farside would be almost completely sheltered from Earth-generated radio noise. There, astronomers would study a range of phenomena that can’t be seen from our planet, or even by Earth-orbiting space telescopes. A telescope on the moon could show us what happened before the universe formed its first stars and galaxies, or let us see electromagnetic fields around distant exoplanets, revealing extremely subtle yet fundamentally important properties about a given world’s true potential for hosting life.

“You’ve got this radio quiet environment on the other side of the moon that enables very sensitive measurements that you just can’t get any other way,” says planetary scientist Steve Squyres, who currently serves as chief scientist at the spaceflight company Blue Origin. “That environment is very, very conducive to doing breakthrough science.”

The Telescope on Apollo 16

The first telescope on the moon was not a radio telescope, but it still unlocked a window into the cosmos not visible from Earth's surface.

The instrument, called the Far Ultraviolet Camera/Spectrograph, was designed by George Carruthers, a young researcher at the Naval Research Laboratory who was already well on his way to pioneering observations in the ultraviolet (UV) spectrum. UV light is largely filtered by Earth’s atmosphere — so, like many parts of the radio spectrum, it has to be studied from space. And after Apollo 11 successfully landed on the lunar surface on July 20, 1969, NASA put a call out to the academic community calling for scientific experiments that could be performed on future lunar missions.

Carruthers proposed a UV telescope. And by April 1972, it was on its way to the moon aboard Apollo 16. Astronauts used the gold-plated instrument to take 178 images of the cosmos, capturing distant star clouds, nebulae, and even shots of Earth’s outer atmosphere. But while the proof-of-concept UV scope accomplished its modest goals, it would take another 41 years to send another telescope to the moon.

After a long hiatus, the China National Space Administration in 2013 finally returned telescopes to the moon. But this time, no astronauts were required. This first-ever remotely controlled lunar telescope was an add-on instrument that flew with the Chang’e-3 lander.

At just 6 inches in diameter, the Lunar-based Ultraviolet Telescope (LUT) is still a far cry from the kinds of instruments astronomers have long dreamed about sending to the moon. But even at that size, the wavelengths LUT observes can offer unique insights into the cosmos, all without interference from Earth.

Chinese scientists used LUT to collect thousands of hours’ worth of data, tracking stars and even galaxies. And, perhaps more importantly, the telescope’s stable performance also served as a technology demonstrator for future missions.

Last year, the Chinese space agency followed LUT by sending a small radio telescope to the moon. In early January 2019, the so-called Low Frequency Radio Spectrometer touched down on the lunar farside with the Chang’e-4 lander.

Chinese scientists have since used the telescope to carry out initial studies of the universe viewed through previously unexplored radio wavelengths. However, due to the modest abilities of the instrument, their observations are limited to the relatively nearby cosmos.

Astronomers’ hopes for lunar scientific observatories have typically been tied to future moon bases, which have remained far-fetched. (Credit: NASA)

Capturing previously inaccessible kinds of radio wavelengths has been a dream of astronomers for decades. Some 40 years ago, astronomers started seriously plotting what different types of lunar telescopes might be able to discover, as well as how they could be built.

Even then, according to a NASA document titled “Future Astronomical Observatories on the Moon,” scientists realized that the moon offered a unique vantage point that could open up “the last window in the electromagnetic spectrum at very low frequencies.”

By the early 1980s, the Apollo missions were a decade in the rearview, but the burgeoning Space Shuttle Program was looking like a success. This led to renewed talks of a return to the moon. Researchers hoped these developments might lead to moon bases that would enable the infrastructure for sustained scientific studies.

“The only way we could conceive of putting scientific instruments on the moon was with astronauts,” says University of Colorado Boulder astronomer Jack O. Burns. He serves as director of the NASA-funded Network for Exploration and Space Science, and for decades has been the lead crusader for building telescopes on the moon.

Now, for the first time — thanks to modern robotics and the emergence of private spaceflight companies — Burns thinks this crazy idea can actually become a reality. His students now routinely work with remotely operated robots and machine learning algorithms — things that would have been unimaginable in the 1980s, he says. “Technology has caught up, and maybe that’s what we needed.”

Due to these technological advancements and more, lunar telescope proposals no longer require astronaut construction crews and $100 billion space programs. Instead, they could be built using rovers sent on privately built rockets that are already under development.

Burns and his colleagues recently completed a NASA-funded study for a rover-deployed radio telescope that would spread out 128 antennas in a flowerlike shape about 6 miles wide. They call their project the Farside Array for Radio Science Investigations of the Dark ages and Exoplanets. Or, more succinctly, FARSIDE.

FARSIDE would study the magnetic fields of planets around distant stars, helping astronomers better understand which exoplanets might be truly habitable. The telescope would also give astronomers their first real chance to study a pivotal period of early cosmological history called the “Dark Ages.” During this epoch, both stars and galaxies hadn’t yet formed, so we are unable to see any of the matter that existed at the time.

NASA also funded another study on a proposal aimed at building an Arecibo-style radio telescope inside of a lunar crater. The project is led by Jet Propulsion Laboratory robotics technologist Saptarshi Bandyopadhyay. He spent three years going through various designs of the telescope before recently receiving funding from the NASA Institute for Advanced Concepts to continue pursuing the project.

And while multiple lunar telescope proposals have gotten further than any others in recent decades, "We still have a long road ahead," Bandyopadhyay says.

But Burns is optimistic. He’s now working with Jeff Bezos’ space company, Blue Origin, which has built a moon lander capable of landing 5 tons’ worth of cargo on the lunar surface. That’s more than enough to carry FARSIDE. All they need now is the roughly $1 billion in funding to make it a reality.

“Thirty years ago, it would have been impossible,” Burns says. “Today, it’s virtually off-the-shelf technology.”