The heat of the Pinwheel

Spiral galaxies are among the most beautiful objects in the sky, and one of the most beautiful of them is M101, also known as the Pinwheel Galaxy. It's a reliable favorite among amateur astronomers because it's big, bright, and located near the north pole of the sky, so it's easy to find for a big part of the year. I've seen it many times through a telescope, but not quite like the way NASA's Wide-field Infrared Survey Explorer (WISE) saw it: glowing fiercely in colors our eyes cannot detect: 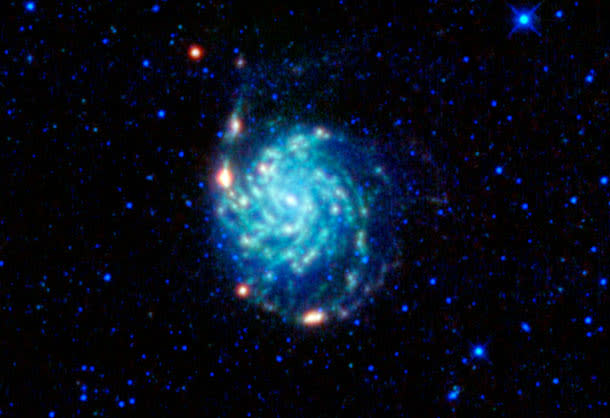 [Click to galactinate.] This image shows the galaxy in the far-infrared. What you see here as blue is actually starlight; green is from long organic compounds called PAHs, and red is from glowing dust, warmed by nearby star formation. Look at the gigantic red clouds where stars are being born! Thousands of these have been catalogued in the Pinwheel.

It's actually an immense galaxy, twice the diameter of the Milky Way and possessing as many as ten times the number of stars. Our galaxy is no lightweight, but the Pinwheel is a monster. I wrote about it when Hubble released a gorgeous and incredibly detailed image of it back in 2006. There's also a spectacular Spitzer image of it as well, which is also in the infrared, though in a different part of the IR spectrum. The WISE mission shut its eye earlier this year when it ran out of coolant to keep its detectors cold (warm objects emit lots of IR, so keeping things cold prevents the detectors themselves from glowing in the very light they're designed to see), but it surveyed the entire sky, returning a whole lot of data. I imagine we'll be seeing more pictures like this coming from the database, as well as lots of amazing discoveries as scientists pore over it. The mission itself may be done, but the information it gave us goes on. Image credit: NASA/JPL-Caltech/UCLA

Related posts: - The Triangulum galaxy writ large - A galaxy choked with dust - The punctuated spiral - A taste of WISE galaxies