The growth of ScienceBlogs & science blogs 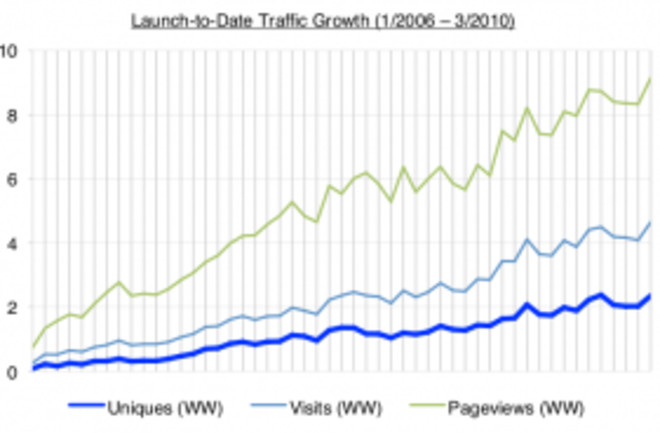 ScienceBlogs^TM just put out a release on their traffic growth. The trend is interesting because after a period of flattening out, 2008-2010 seems to have seen some robust growth again. As I said when I left I do wish SB and many of their bloggers well, and I continue to subscribe to several of their blogs in my RSS as well as the select feed. The network's robust growth is a positive sign when it comes to the transition of science communication from dead tree to the internet. I know that there's been a lot of stress on the part of science journalists as to the sustainability of their enterprise, though that is really just a domain-specific instantiation of the issues in journalism as a whole, but until that works itself out the growth and persistence of science blogging and science-related websites is a good thing. There is a calm after the storm of creative-destruction, and the current science blogosphere is laying the seedbed for future renewal. The outcome may be sub-optimal from the viewpoint of labor, but the consumer will benefit. The growth of internet based science communication means that the pie is growing, and the tide is rising. It isn't a zero-sum game between SB, Nature Networks, Scientific Blogging, Discover Blogs, etc. My main concern personally is that my readership is still strongly Anglospheric, literally hundreds of millions of Chinese have started using the internet while I've been blogging, but very few of them do and can read my content. Due to language constraints this may be a long term structural issue, though the utilization of Google translate + chart heavy posts may be a way to push beyond the Anglosphere a bit. If you want to see the geographic skew, sitemeter is sufficient even with a sample size of the last 100 visitors. Note: Also, please note that the growth can't be attributed only to non-science content. Obviously I can't lay out specific numbers, but blogs which focus on science such as Tetrapod Zoology and Frontal Cortex draw lots of traffic. (via DM)