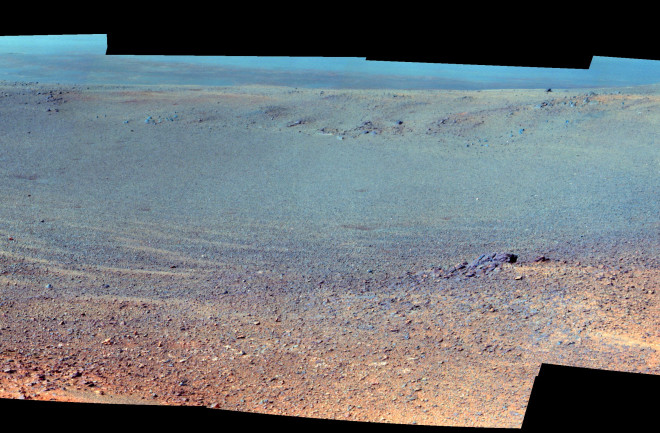 Opportunity traveled for 14 years on Mars, taking data and images such as this one from Orion Crater. (Credit: NASA/JPL-Caltech/Cornell Univ./Arizona State Univ.)

The Opportunity rover, like its twin Spirit, was designed for an original mission of just three months. When engineers lost contact on June 10 of last year, it had been exploring for fourteen years. And today, mission scientists finally declared an official end to the mission. Here are just a few of Opportunity’s many successes during its long Red Planet expedition.

Opportunity discovered the first meteorite on Mars close to its own discarded heat shield. (Credit: NASA/JPL/Cornell)

Opportunity discovered the first meteorite on Mars, sitting near its own heat shield. While a few meteorites had been found on the moon, this was the first time one was discovered on another planet. It’s mostly made of nickel and iron, a type of meteorite that’s rarely found on Earth. Opportunity went on to find more meteorites, both metallic and stony.

The small, round, bluish stones Opportunity found were likely formed in the presence of water. (Credit: NASA/JPL-Caltech/Cornell/USGS)

Opportunity found no actual fruit, but the round, bluish stones excited scientists. In its first few months on Mars, Opportunity discovered stones that contained the minerals hematite and jarosite, which only form when rocks are exposed to acidic water. By finding these “blueberries” across Meridiani Planuma, Opportunity’s original stomping ground, the rover proved that Mars once had abundant surface water. It would continue finding blueberries throughout its travels.

The cliffs of Endurance Crater show layers that were and were not laid down in the presence of water. (Credit: JPL/NASA/CalTech)

Opportunity’s second venture was into a deep crater called Endurance, and it later spent two Earth years exploring Victoria Crater. Again, both yielded signs of Mars’ watery past. Endurance’s cliffs showed layers of rock, some laid down in watery times and others during dry periods, showing a varied history of Martian water. More hematite dotted Victoria Crater’s ridge, indicating it had been thrown there during the impact that formed the crater. Scientists think that these minerals formed underground, suggesting that water soaked through the surface and stayed there long enough to form the minerals. All of this water would have been salty and acidic.

Opportunity took this shot looking back on its tracks along the rim of Endeavor Crater. (Credit: NASA/JPL-Caltech/Cornell Univ./Arizona State Univ.)

At the edge of Endeavour Crater, Opportunity found its first signs of non-acidic water that would have been conducive to life – and there was a lot of it. The walls of Endeavor held abundances of clays that only form in neutral water. While plentiful on Earth, the clays were Opportunity’s first sign that life could’ve had a chance on early Mars.

Opportunity roved from its landing site at Eagle Crater all the way to Marathon Valley on an 11-year journey. (Credit: NASA/JPL-Caltech/MSSS/NMMNHS)

In March 2015, Opportunity celebrated the completion of its first marathon, or 26.2 miles. By 2018, it had traveled just over 28 miles, and still holds the record for the most traveled off-world rover.