The Future of Satellites Lies in the Constellations

Numerous companies are planning to launch and operate swarms of small satellites in coming years. Earth orbit is about to get crowded. 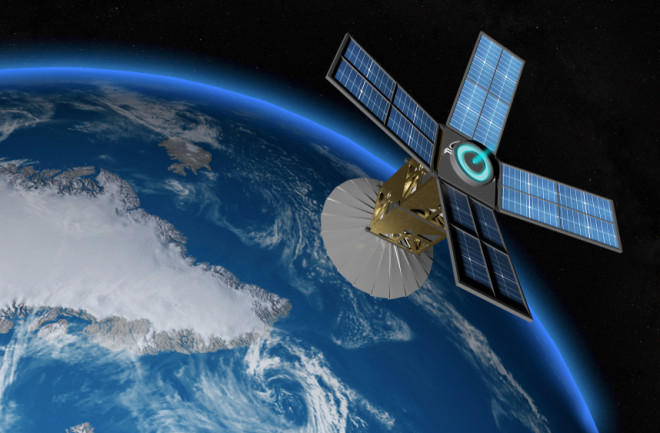 When Sputnik 1, the first satellite, was launched by the Russians in 1957, low Earth orbit was a lonely place. Today, just six decades later, the space around Earth looks far different. Thousands of satellites whiz around our planet at varying altitudes at speeds approaching 20,000 miles per hour. Of the more than 11,000 satellites that have ever been launched, there are roughly 3,000 currently active, according to the Union of Concerned Scientists’ Satellite Database.

That number could pale in comparison to the satellite population by the end of the decade, though. Some estimates show that more than 100,000 satellites could orbit our planet by 2030, an exponential increase that has many scientists worried.

The steep rise in satellite numbers will likely come largely from so-called satellite constellations, groups of dozens or even hundreds of small satellites united in a common task. The most well-known of these is likely SpaceX’s Starlink constellation, which delivers internet access to remote places. The company has over 1,500 satellites currently in orbit, and founder Elon Musk plans for tens of thousands one day.

They’ll share space with satellites from dozens of companies and nations, put there to enable communications, provide weather data, take photos, carry out experiments and more. These satellite swarms could bring internet access to remote villages, enable scientists to keep tabs on climate change with new precision and more. But they could also interfere with astronomers’ ability to watch the night sky, and pose new hazards to manned missions to space. Space is certainly going to get more crowded soon — the effects of which will remain to be seen.

There are two factors likely to drive the explosion in satellite numbers. One is the advent of private spaceflight companies, which have provided the rockets needed to bring large numbers of satellites to orbit. The other is CubeSats, small, modular satellites that are cheaper to build, and easier to take to orbit than traditional custom-built satellites.

Because they’re small, it costs far less to take a CubeSat weighing perhaps a few dozen pounds to orbit than a larger satellite weighing over a thousand pounds. And CubeSats, unlike built-to-order satellites, can be manufactured quickly and more cheaply. Those cost efficiencies have made it feasible for companies like SpaceX to imagine creating and launching thousands of satellites in just a few years.

Satellite swarms offer a few key advantages over traditional satellites, especially for communications and internet access. Normally when a satellite orbits Earth, it must go extremely quickly, meaning it won’t stay in range to deliver, say, broadband for long. Geostationary satellites solve this problem by orbiting as fast as the Earth rotates, but the tradeoff is that they must remain very far away: 22,236 miles versus a few hundred for low Earth orbit. That means transmissions take far longer and need more power — not ideal when you’re trying to ensure fast internet access.

The first satellite constellations actually date back decades. The Global Positioning System, or GPS, relies on a network of at least 24 satellites orbiting Earth, maintained by the U.S. government. Today, everything from smartphones to mapping apps to financial systems rely on GPS to operate. Similar systems, like the European Union’s Galileo Network and Russia’s GLONASS also rely on their own groups of satellites. On the commercial side, the privately-owned Iridium network of 66 spacecraft has been providing satellite phone coverage for more than two decades.

Today, many of the satellites in orbit are involved in communications. That holds true for satellite constellations as well, many of which are aimed at providing internet access, à la Starlink. Europe’s O3b began offering satellite internet to clients in 2014 using its own network of spacecraft. OneWeb, which has partnered with Airbus, plans to launch a total of 900 satellites in coming years to flesh out its own internet network. China, meanwhile, recently announced plans to put some 13,000 satellites in space to establish its Gouwang internet program.

But it’s not all about the internet in space. San Francisco’s Planet Labs is using nearly 200 Dove satellites to continually photograph the entire planet. These images allow them to provide pictures of Earth’s surface at 3 to 5 meters resolution, updated multiple times a day in some cases, the company says. They’re aiming to nab clients in industries ranging from agriculture to research to infrastructure.

Spire, another imaging and space-based monitoring company, offers services like ship and aircraft tracking and weather monitoring using its proprietary satellite network. GHGSat’s satellites track emissions on Earth, searching for methane leaks and other sources of greenhouse gases. The company hopes to have 10 satellites in orbit by the end of 2022.

Another company, Cloud Constellation, is attempting to solve another problem entirely. The startup hopes to convince companies to store their data in orbit, in servers aboard its satellite swarm.

Risks of Reaching for the Stars

An exponential increase in the number of metal boxes flying through near-Earth space poses a number of risks, some more obvious than others. Some come from astronomers, who worry that swarms of satellites will interfere with their observations of deep space.

Those concerns were put on display almost immediately after SpaceX began launching Starlink satellites to orbit. A photo taken at the Lowell Observatory in Arizona in May 2019 reveals dozens of bright streaks obscuring the sky as Starlink spacecraft flew overhead. The photo is a bit of an exaggeration, as the satellites continued to spread out after launch. But it could be a harbinger of the crowd to come.

More satellites could also mean more radio frequency transmissions flying about the atmosphere. In addition to looking visible light, astronomers monitor the sky across much of the electromagnetic spectrum, including in radio frequencies. Radio waves can travel through things that block light, like dust, meaning astronomers can see things otherwise obscured. Images of new galaxies, pulsars, quasars, and even the first-ever image of a black hole have come thanks to radio telescopes.

More satellites in orbit also increases the odds of collisions. Two spacecraft smashing into each other at speeds of tens of thousands of miles an hour might lead to the dreaded Kessler Syndrome, a feedback loop of destruction that could render Earth orbit a no-fly zone for decades. The process is simple: An initial collision creates a cloud of thousands of pieces of debris whipping around the planet. Some of these pieces hit other spacecraft, creating more debris, and the result is a cascade of satellite mayhem. The resulting cloud of debris might be dense enough that any spacecraft put into orbit would be destroyed, putting a premature end to the satellite era.

That eventuality could be averted by ongoing efforts to clean up low-Earth orbit, where an estimated 12,000 trackable pieces of debris already circulate. Some of those are from past satellite accidents, such as the 2009 collision between a defunct Russian satellite and an Iridium satellite. While the odds of a spacecraft being damaged by debris remain slim, it’s still cause for caution. The International Space Station has been moved on multiple occasions to minimize the risk of being hit by nearby objects.

And more satellites above us could result in changes to our planet, too. A recent study estimates that Starlink’s satellites alone might bring more aluminum into the upper atmosphere upon re-entry than meteoroids do. That extra metal might damage the ozone layer, some scientists speculate, further harming the environment. It’s a reminder of one of the fundamental principles of satellite operation: What we put up into orbit will someday come back down to Earth.