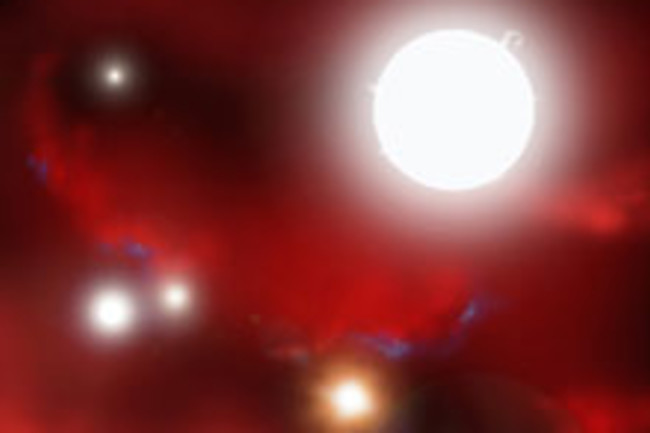 For million of years after the Big Bang, the universe was a dark place filled only with wisps of hydrogen and helium, as well as the mysterious substance known as dark matter that makes up much of the universe's mass. Now, researchers have finished running a sophisticated computer program that simulated those early cosmic conditions and replicated the production of the first primordial star, which cast the first rays of starlight out into the blackness. Researchers say that the new model shows that the first star was tiny, but rapidly grew to enormous proportions before either flaming out or collapsing.

In the early universe, researchers believe that clouds of dark matter gathered and compressed pockets of hydrogen and helium gases. According the researchers' simulation, those areas reached a tipping point around 300 million years after the Big Bang, igniting the first nuclear reactions.

Over the course of about 100,000 years, according to the model, the compressed gases reach densities roughly equivalent to that of liquid water on Earth. At that point, the gases inside the halo have formed a protostar, about one-hundredth the mass of the sun [Science News].

The report, which will be published tomorrow in the journal Science

[subscription required], goes on to say that in the simulation the first star doesn't stay small for long.

That protostar acts as a seed, [lead author Naoki Yoshida] says. It is surrounded by a huge amount of gas, which it quickly pulls in, growing into a star with about 100 times the mass of the Sun [New Scientist].

But in contrast to more modern stars like our own sun, which may last for 5 billion years, researchers say the first stars probably ran their course in a brief 1 million years.

While none of the [earliest] stars survive today, their influence remains. The processes churning inside the stars synthesized the universe's first heavy elements. In dying, these stars may have blasted this stuff back into space to become building blocks of future stars and planets composed of many more elements [Reuters].

; it's also possible they collapsed into black holes

that would have permitted little of their materials to escape into space. Image: D. Aguilar/CFA