The First Moon Base Will Be Printed 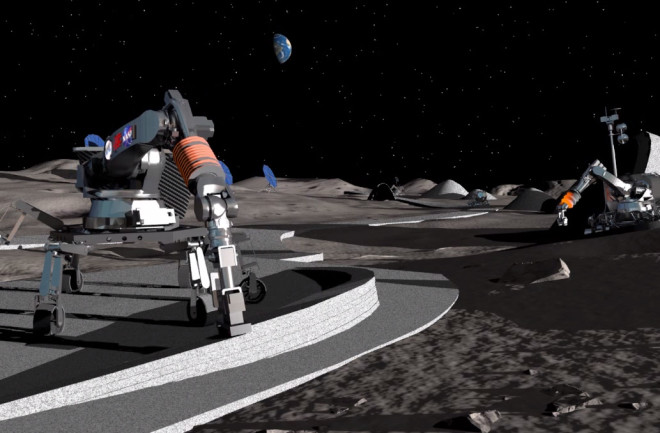 3D Printers would scoop material from the lunar surface into bins and spit it out as building material. (Credit: Contour Crafting)

Planetary Resources, a company hoping to make asteroid mining into a trillion dollar industry, earlier this year unveiled the world’s first 3D printed object made from bits of an asteroid.

3D printing, and additive manufacturing processes more generally, have made many advances in recent years. Just a few years ago, most 3D printing was only used for building prototypes, which would then go on to be manufactured via conventional processes. But it’s now increasingly being used for manufacturing in its own right.

Nearly two years ago, NASA even sent a 3D printer to the International Space Station with the goal of testing how the technology works in micro-gravity. While the printer resembles a Star Trek replicator, it’s not quite that sophisticated yet; the objects it can print are small prototypes for testing.

But 3D printed objects don’t have to be small. Entire houses have now been 3D printed, including out of renewable resources such as clay and earth.

And visionary architect Enrico Dini, a pioneer of 3D construction featured in the film The Man Who Prints Houses, isn’t thinking small, confessing:

What I really want to do is to use the machine to complete the Sagrada Familia. And to build on the moon.

NASA, the European Space Agency (ESA) and entrepreneurs aiming to jump-start human colonization of space see the 3D printing of large scale objects, including entire habitations, as a major enabling technology for the future of space exploration.

In 2013, a project led by the ESA used simulated lunar regolith – i.e. loose top soil – to produce a 1.5-ton hollow cell building block. It was conceived as part of a dome shelter for a lunar base that would also incorporate an inflatable interior structure. The project used a D-Shape printer using Enrico Dini’s company, Monolite.

Since 2011, NASA has been funding similar research led by Professor Behrokh Khoshnevies at the University of Southern California. His team has been using a technology called contour crafting, which also has the goal of using 3D printing to construct entire space habitations from in situ resources.

After testing 3D printing in space, NASA has decided the technology is close to a tipping point. As part of a new program of public/private partnerships aimed at pushing emerging space capabilities over these tipping points, NASA has awarded a major contract to the Archinaut project.

The project will see a 3D printer, built by Made in Space, mated with a robotic arm, built by Oceaneering Space Systems, with Northrup Grumman providing the control software and integration with the ISS systems.

The goal of the project is to provide an on-orbit demonstration of large, complex structure – in this case a boom for a satellite – sometime in 2018.

But 3D manufacturing is already changing the aerospace industry. Composites, for example, have become a commonly used material for a wide variety of applications.

But composites tend to suffer weakness between their laminating layers, which can lead to material failures in crucial components. 3D weaving, which deploys fibers on three axes, is set to revolutionize these materials and their performances.

Indeed, NASA is now using 3D woven quartz fiber compression pads for its Orion Space Vehicle and exploring the technology for use in other thermal protection surfaces.

But the ability to use in situ materials, both for fuel, water and construction whether on the moon, Mars, or asteroids has long been recognized as a crucial ability to enable human exploration of the solar system.

Contests such as last the 3D Printed Habitat Challenge, part of NASA’s Centennial Challenges, are an important element of an innovation strategy designed to push the envelope of technology, leveraging entrepreneurial spirit, scientific and technological know-how and design thinking in a bid to take human space exploration to the next level.

The winning design, announced at the New York Makers Faire in September, was the Mars Ice House.

The Mars Ice House Habitat, which would be printed out of ice from relatively abundant water on Mars’ northern hemisphere, is a far cry from the bunker-like spaces frequently envisioned for Mars bases. The ice would provide ample radiation protection while creating a radiant, light filled space reminiscent of a cathedral.

Space exploration has always been associated with visionary fiction and grandiose plans, and it looks like 3D manufacturing and construction may finally bring the printed word to life.