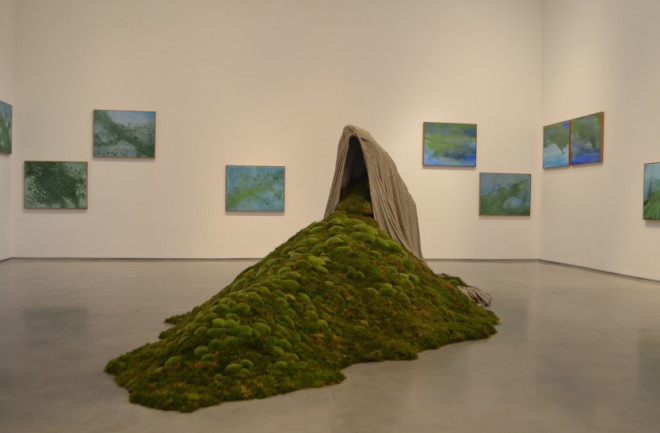 "The First Green" at the Marianne Boesky Gallery. (Image: Ana Pantelic) Every morning at Hamelin Pool, in Western Australia, the first rays of sunshine illuminate knobby reef-like structures, submerged or peeking just above the gentle waves, depending on the tide. On the crudely rounded surfaces of these rocks, microorganisms stir and begin the daily task of photosynthesizing, fighting against occluding sand grains to harvest the sunlight. This scene, or something like it, has likely been occurring every morning, somewhere on Earth, for the last 3.7 billion years. To artist Thiago Rocha Pitta, the timelessness of these structures, known as stromatolites, makes them an important mirror of the human impact on the natural world. “Human history is just a little part of the history of our planet,” he explains. “I have no problems realizing how insignificant we are.” In his latest exhibition, The First Green, at New York’s Marianne Boesky Gallery through April 29th, Rocha Pitta portrays a stromatolite sunrise in a video, allowing viewers to share in one of the planet’s most time-honored scenes. It’s deeply familiar, but jarringly off-kilter, an inverted look at a process that has helped make Earth the planet it is today. As cyanobacteria on the rocks’ surfaces gain energy from sunlight, they produce oxygen, which is in turn used by animals such as ourselves to burn organic carbon and make energy. Small particles stick to the gooey layer of microbes, forcing the bacteria to move upward and establish another layer of biofilm. The striated rocks that result from this process are pervasive in the geological record, but surprisingly rare today: Hamelin Pool and the Bahamas are the only two known sites of modern stromatolites. “We are here because of the cyanobacteria,” Rocha Pitta says reverently. “We should have temples for them.” Rocha Pitta grew up in Brazil’s Minas Gerais, “hanging out at the farms, with the cows, going to the mountains to swim, in the waterfalls.” His affinity for nature – a word he prefers not to use, as it suggests a barrier between humans and the rest of the planet that he doesn’t acknowledge – developed early and has become a dominant aspect of his work. For The First Green, Rocha Pitta tackled a challenging new medium, searing green and blue patterns into frescoes.

Artist Thiago Rocha Pitta. (Image: Ana Pantelic) The process echoes geological forces, from volcanic emission of carbon dioxide to stromatolitic construction. “The fresco cycle is the carbon cycle,” he explains, “it’s the same thing.” To create his algal, aqueous, impressionistic frescoes, Rocha Pitta first bakes a slab of calcium carbonate at 900 °C to drive off carbon and enable oxidation. Putting the surface underwater, “it’s very volcanic, very dangerous;” afterward, it sits for a month before the painting process. With plaster applied to the surface, you’ve got four to six hours to paint. While the water evaporates, the carbon enters the fresco, “and it releases oxygen,” Rocha Pitta says excitedly, “just like the cyanobacteria.” For such a geology enthusiast, the journey to Hamelin Pool was nothing short of a pilgrimage. “I just got so excited, I almost had a heart attack,” he recalls. Rocha Pitta spent ten days in the company of the stromatolites, trying to find new ways to communicate the wonder of the scene unfolding before him. “There are many things that we have not developed language to describe,” he says, “some points you can’t get with analytical views. The things you can’t say, you can make, you can show.” “If you have the patience, you will get rewarded.”