The Fate Of Giant Planets Depends On Where They Grew Up 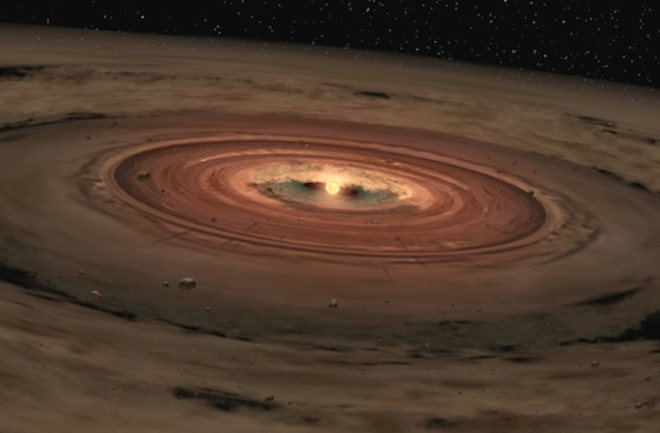 The protoplanetary disk around AA Tauri, a possible planetary system located 460 light-years away, is shown here in this artist’s concept. (Credit: NASA) Astronomers generally agree that planets form out of the dusty debris disks that surround most newborn stars. When one of these so-called protoplanetary disks rotates around a nascent star, globs of material clump together. Over the course of a few million years, these clumps (called planetesimals) grow larger and larger, forming a protoplanet that eventually clears out its orbital path within the disk. And when a protoplanet gets massive enough, gravity forces it into a spherical shape, finally cementing its status as a true planet. However, what happens after these planets form is still a bit of a mystery. This is especially true for giant planets. Although all of our solar system’s most massive planets orbit relatively far from the Sun, in other star systems, enormous exoplanets are found very, very close to their parent stars. But why is this? Shouldn’t all giant planets end up in similar locations? In a new study recently published in The Monthly Notices of the Royal Astronomical Society, a team of researchers investigated this long-standing mystery. Specifically, the team used simulations to study the various ways a newly formed giant planet can migrate through its host system over time. Although the team verified that some planets travel inward toward their parent stars after they form (as previous research has shown), the team was surprised to find that a significant fraction of growing giants can be dragged away from their host stars, leading to the type of setup we see in our own solar system today. “There’s a lot about the early years of young planets that we don’t know,” said Dimitris Stamatellos, an astronomer at the University of Central Lancashire (UCLan) and lead author of the new study, in a press release. “There is a very fine balance between the forces that push the planet towards its parent star and the forces that push the planet away from it.” To carry out the study, Stamatellos and his team performed advanced computer simulations using the UCLan High Performance Computing facility and the UK DiRAC supercomputer facility. With these powerful tools, the researchers were able to model how growing, Jupiter-mass planets are influenced by their original cosmic homes: protoplanetary disks. They found that giant planets that grow up in massive, unstable protoplanetary disks tend to be pushed outward, away from their parent stars. Typically, these planets end up trekking out to distances between 10 and 40 times the distance between Jupiter and the Sun. This finding led the team to conclude that there are likely many more giant exoplanets orbiting far from their host stars than astronomers previously thought. The problem is — as far as exoplanet detection goes — they are just too darn faint to see, at least for now. On the flipside, the researchers also found that giant planets that grow up in milder protoplanetary disks — those that are less massive and more stable — tend to be dragged inward, toward their parent stars. Though this seems to be the preferred path, it isn’t necessarily the safest. The team notes that some of the inward-migrating planets were ripped apart by intense gravitational interactions with the protoplanetary disk and the host star. “A planet’s survival is also difficult to predict. Many planets that formed initially may be destroyed, and only a few can survive to reach adulthood,” said Stamatellos. “This newly discovered insight into the diversity of how young giant planets evolve can help us to understand more about the formation of solar systems beyond our own.” Though many questions still remain regarding the formation and migratory habits of young giant planets, astronomers hope the recently launched TESS telescope — which will search for exoplanets around nearly 200,000 stars within 300 light-years of Earth — will help answer them.