The Estimated Number of Stars in the Universe Just Tripled 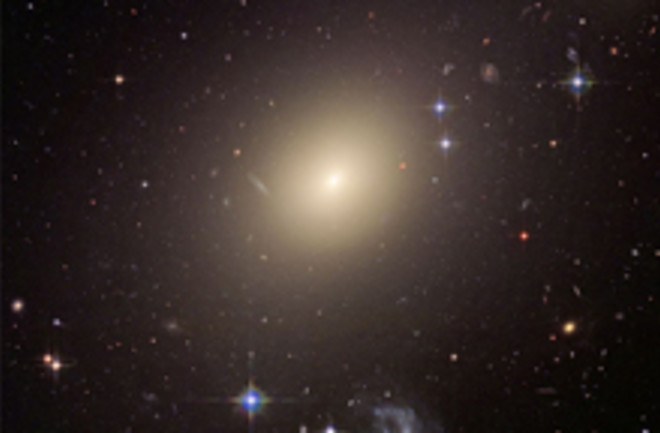 A study by Yale astronomer Pieter van Dokkum just took the estimated number of stars in the universe—100,000,000,000,000,000,000,000, or 100 sextillion—and tripled it. And you thought nothing good ever happens on Wednesdays. Van Dokkum's study in the journal Nature focuses on red dwarfs, a class of small, cool stars. They're so small and cool, in fact, that up to now astronomers haven't been able to spot them in galaxies outside our own. That's a serious holdup when you're trying to account for all the stars there are.

As a consequence, when estimating how much of a galaxy's mass stars account for – important to understanding a galaxy's life history – astronomers basically had to assume that the relative abundance of red-dwarf stars found in the Milky Way held true throughout the universe for every galaxy type and at every epoch of the universe's evolution, Dr. van Dokkum says. "We always knew that was sort of a stretch, but it was the only thing we had. Until you see evidence to the contrary you kind of go with that assumption," he says. [Christian Science Monitor]

nearby (between about 50 and 300 million light years away) for these dim stars. Their spectrometer could catch the collective signature of these faraway red dwarfs and estimate how many of them the neighbor galaxies harbor. In the Milky Way there are about 100 red dwarfs for every one star like the sun, but in these galaxies that number may be more like 1,000 to one.

Elliptical galaxies are some of the largest galaxies in the universe. The largest of these galaxies were thought to hold more than 1 trillion stars (compared with the 400 billion stars in our Milky Way). The new finding suggests there may be five to 10 times as many stars inside elliptical galaxies than previously thought, which would triple the total number of known stars in the universe, researchers said. [Space.com]

While van Dokkum's Nature paper was released to the public today, it's been raising a more private ruckus already:

For the past month, astronomers have been buzzing about van Dokkum's findings, and many aren't too happy about it, said astronomer Richard Ellis of the California Institute of Technology. Van Dokkum's paper challenges the assumption of "a more orderly universe" and gives credence to "the idea that the universe is more complicated than we think," Ellis said. "It's a little alarmist." Ellis said it is too early to tell if van Dokkum is right or wrong, but it is shaking up the field "like a cat among pigeons." Van Dokkum agreed, saying, "Frankly, it's a big pain." [AP]

And besides tripling the number of stars in the universe (isn't that enough??) and infuriating some astronomers, van Dokkum's find has some serious secondary implications. More stars, of course, means the opportunity for more planets, and many recently found exoplanets orbit red dwarfs. That includes Gliese 7b, the would-be Goldilocks planet

, and GJ 1214, which the same issue of Nature reports could possibly have an atmosphere of steam

. Furthermore, the plethora of red dwarfs could explain a dark matter mystery:

Elliptical galaxies posed a problem: The motions of the stars they contained implied that they had more mass than one would get by adding the mass of the normal matter astronomers observed to the expected amount of dark matter in the neighborhood. Some suggested that ellipticals somehow had extra dark matter associated with them. Instead, the newly detected red dwarfs could account for the difference, van Dokkum says. [Christian Science Monitor]

Related Content: Bad Astronomy: Possible earthlike planet found in the Goldilocks zone of a nearby star!

80beats: Einstein Proven Right (Again!) by the Movements of Galaxies