The Earth-Twin Planet That Nobody Talks About 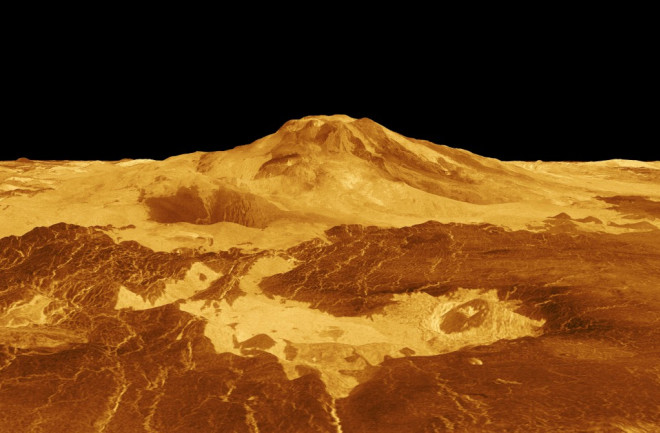 A colorized radar map of the Maat Mons volcano on Venus, shows lava flows of unknown age, along with an apparent impact crater in the foreground. This image, created more than two decades ago by NASA's Magellan spacecraft, still represented the state of the art in our knowledge of Earth's near-twin. (Credit: NASA/JPL)

NASA scientists were conferring today about a nearby planet that is shockingly similar to Earth. It is just 5% smaller in radius and 15% smaller in mass. It is almost the exact same age as our planet, and gets its warmth from an identical star. The only thing that’s a bit off is that it orbits a bit closer to its star than Earth does, so it receives nearly twice as much radiation. On the other, it also reflects away a lot of that radiation. Its theoretical (equilibrium) temperature is just below freezing, so with a little natural greenhouse warming it would be quite an inviting place.

If we found it orbiting another star, this world would surely be hailed as the most Earthlike exoplanet known: the best place yet to search for alien life.

No doubt you sense there is a catch, and indeed there is. The world I’m talking about is Venus. It is not orbiting another star; it is the planet closest to home right here in our own solar system. But I’m not just being coy. Despite its proximity, Venus is a profound enigma. It really should be a hospitable world, but the truth is that it is more like hell on almost-Earth. Understanding why that is–why our planet went right while Venus went terribly wrong–is crucial for finding out whether habitable planets are common or rare throughout the universe.

The ways in which Venus diverged from Earth are as dramatic as they are perplexing. Venus has a crushing atmosphere tinged with sulfuric acid clouds and dominated by carbon dioxide. It has a year-round surface temperature of about 450 degrees Celsius (850 degrees Fahrenheit), far hotter than an oven set to “broil.” It has no appreciable magnetic field to protect it from charged particles that blow out from the sun. It has no plate tectonics to renew its geology. It rotates so slowly that one “day” takes 243 Earth days, and its rotation is backwards compared to that of almost all the other planets. It has no moon.

I’m saying “might” a lot because there is still a tremendous amount that scientists do not know about Venus. The perpetual cloud cover presents a huge challenge in studying its surface features. Even worse, landing a probe on its surface is exceedingly difficult. Atmospheric pressure on the ground is more than 90 times that at sea level on Earth, and then there are those searing temperatures, which quickly fry electronics and melt mechanical components. There is also a sense of gloom hanging over Venus, since the odds of finding anything alive there are just about zero. For these reasons, Venus has attracted a tiny fraction of the attention lavished on Mars.

Surface of Venus as seen by the Soviet Venera 14 lander, which touched down in 1982. The thick, cloudy atmosphere lends a ruddy cast to the scene. No other probe has been there since. (Credit: Russian Academy of Sciences, processing by Ted Stryk)

The last serious effort to map the surface of Venus was the work of NASA’s Magellan spacecraft, which circled the planet while scanning it with imaging radar. That mission concluded in 1994. The view from the ground is even more limited. The most recent Venus lander was Venera 14, which arrived in 1982. It was sent by the Soviet Union. That’s right: The last time we touched down on Venus, there was a Soviet Union.

But Venus actually has a tremendous amount to tell us about life in the universe. If researchers knew more about Venus, they could judge how likely it is that Earth-size planets around other stars would follow the same disastrous course. They would have a point of comparison for evaluating which aspects of Earth’s development were crucial to the emergence of biology. They could also investigate the great questions hanging over Earth’s wayward twin: Was it always this nasty, or did it start out hospitable before devolving to its present state? Could life have started here billions of years ago, only to get snuffed out by a relentless environmental catastrophe?

Simulated Venus radar map from the VERITAS probe shows how much it would improve on the imagery from Magellan. (Credit: NASA-JPL/Caltech)

At long last, we may start to get some new answers. Today, NASA announced five finalists for its next midsize, Discovery-class mission. Two of them target Venus. Next year the agency will pick on winner from the group, with the intent of launching it by 2021. One of the contenders, called VERITAS [PDF link], would revisit the radar-mapping concept of Magellan, but using modern technology to yield vastly sharper images. Such views would allow a much deeper examination of Venus’s geological evolution and its current state of activity. The other concept, DAVINCI, would send a probe drifting down through the Venusian atmosphere to study its composition, sniff out signs of volcanic eruptions, and study how the thick atmosphere interacts with the super-heated surface.

There are three other intriguing and highly worthy proposals in the latest set of Discovery candidates. In a perfect world we would do them all. In our imperfect world (though still a much more pleasant world than Venus), I’d vote for VERITAS. It would mark a huge step forward in making sense of Earth’s wayward twin, and learning whether Venus or Earth is more likely to be typical of the superficially Earthlike planets now being discovered around other stars.