The Drake Equation: What Are the Odds That Aliens Exist?

Humans are even now looking for signs of aliens with projects like SETI. 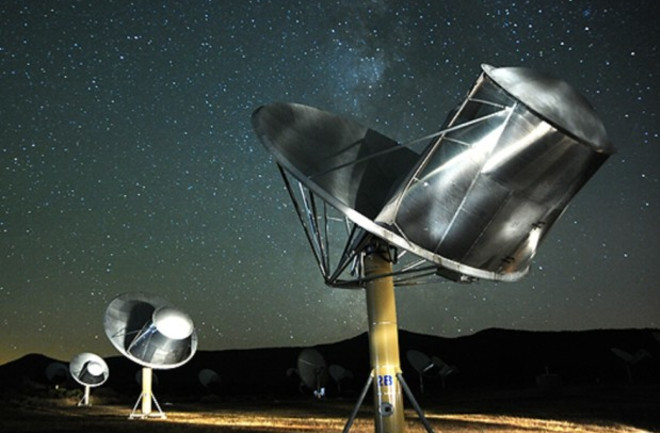 The Drake equation is one of astronomy’s most famous attempts to answer the question: Are we alone? It asks not just about any life, but the top shelf stuff: intelligent life with the ability to communicate with beings outside their planet. Microbes or floating sentient clouds don’t make the cut. We want aliens that will talk to us.

To be clear, this means there could be life out there in the universe that the Drake equation would discount. But in terms of knowing how likely we are to receive alien signals, it’s a great way to organize our questions. It starts from a sky-high view of the necessities for life and then zooms in, each component of the equation narrowing or broadening the possibilities (and getting harder to determine).

Starting With Our Telescopes

The equation asks first about the average rate of star formation in the galaxy. This doesn’t sound particularly applicable to life, but that’s the beauty of the Drake equation. It realizes that to have a species, you have to have a planet, and to have a planet, you must have stars. So we’ll start with making stars. For a long time this was the only number we had hard evidence for. We can measure star formation rates in many galaxies, ours or any other, by looking at the fraction of young to old stars.

We also need to understand something called the initial mass function, which explains how many big, little, and in-between stars emerge out of a stellar nursery. This number ends up being “a couple,” or 1.5-3 stars born per year, according to the most recent science. This may not sound like much on the face of it, but keep in mind the billions of years the universe has been churning. It adds up quickly.

The second number is the fraction of stars that have planets. This was a mystery for a long time. Astronomers could speculate, but until the past few decades, we really didn’t have solid evidence. Thanks to Kepler and WASP and all the other exoplanet surveys, we now have a lot of planets and star systems to judge from. Our best guess for this number is roughly 1: that is, there’s roughly one planet for every star in the galaxy. Of course, some stars like our own sun have many planets, and others none, but we’re talking averages here.

The next question is, once a star has planets, how many of them are capable of supporting life? This is where we start hitting roadblocks. We only know of one planet that does have life. We can argue about whether Mars could have in the past. We can define habitable zones where planets can support liquid water on their surfaces, but what about worlds like Europa, with subsurface oceans? What about tidally locked planets around dwarf stars? The number is highly variable. We think it’s somewhere between 3 and 5 right now, but that could be higher or very much lower, depending on how you define habitability.

And then we start really plunging into the unknown. What fraction of planets that could support life actually develop living creatures? Again, we know of just one so far that has. This number is very much an unknown. Is this 100%? Or do we count Titan and Europa and Mars and Venus and say it’s only 20% in our solar system?

How many planets that could harbor life actually do? (Credit: NASA/Ames/JPL-Caltech)

Can the Aliens Talk to Us?

This next bit is part of what separates the Drake equation from general thought experiments about the existence of life in the cosmos. It asks how many intelligent civilizations come up with technology that lets them broadcast evidence of their existence into space (purposefully or not). We’ve been sending out radio waves for decades, and we’re only getting louder. It’s of course possible for an intelligent civilization to remain quiet, but we’re interested in the ones we can communicate with, which means they have to give some signs.

The last factor considers how long these civilizations hang around. One that exists for only ten years before an asteroid destroys it, or destroys itself by nuclear war, will be harder to find than one that broadcasts for hundreds, thousands, or even millions of years. During the Cold War, many argued that it looked like our civilization — and therefore most others? — might not make it past the nuclear age. The window between developing radio technology and nuclear weapons was pretty brief for us.

On the other hand, you can argue that once a lifeform escapes off-world and starts to colonize other planets it becomes much harder to wipe out as an entire civilization. One asteroid or plague wouldn’t do it. So maybe those civilizations quickly become immortal.

If you combine all these numbers, you can end up with conservative estimates that give a total number less than 1; as in, we are alone in the universe. More optimistic numbers can yield tens of millions of possibilities. Drake’s original estimates were between 20 at the low end, and 100,000,000 at the upper end. So while we’re making progress on some of these figures, we’ve still got a long way to go.