The case of the white Cubans

In a follow up to a post below, a new paper in PLoS Genetics has some data on American Hispanics. Specifically, Puerto Ricans, Dominicans, Mexicans, and Cubans, as well as assorted Central and South Americans. I am not too interested in the cases except Cubans; no one doubts the mixed heritage of the other groups, though the African ancestry of Mexicans, and some Central and South Americans may surprise (again, I have to note that this not surprising in light of history, and has been robustly confirmed in the genomic literature).

But Cuban Americans are somewhat a special case. The vast majority, specifically, 85 percent, identify as white. This is a higher proportion than the number of self-identified whites in Cuba, and a function of the skewed nature of the migration out of Cuba socially and economically. By and large the white elite of the island fled Castro's revolution to a far greater extent than the black lower classes. And contrary to American stereotypes of Latin American ease and openness about race, Cuba was a relatively stratified society, albeit not characterized by hypodescent. Slavery was not abolished on the island until 1884. Additionally, Cuba did experience a relatively large wave of Spanish immigration in the early 20th century. I have taken the claims of "pure Spanish ancestry" on face value in the past because of this history. But further genomic evidence makes me reconsider the biases in the reporting of ancestry. For example, I have heard singer Gloria Estefan mention that her heritage was of recent Spanish immigrants from Cuba, but Wikipedia indicates that this is the origin of her maternal lineage. It leaves her paternal lineage unaccounted for. I have no doubt that her father's family were white Cubans, but if their roots on the island were somewhat deep, I am also sure that they had non-trivial African, and possibly Amerindian, ancestry.

The reason for some of these assertions from are the genomic results, like figure below from the paper mentioned above (reedited for some clarity and specificity). 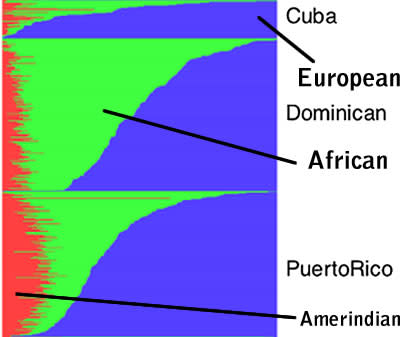 This is the output of an algorithm which constructs a model of population structure. The full input data set included other Latin Americans besides the ones I'm displaying, as well as various HapMap and HGDP groups, including Africans, Europeans, and some "pure" Amerindian tribes. The plot to the left is at K = 3. That means that it has specified three ancestral populations. Because Europeans, Africans, and Amerindians, are very distinctive in relation to each other they naturally have overlapped almost perfectly with the three elements discerned by the program. The results are sorted by European, then African, and finally Amerindian, ancestry (so the Cuban rectangle actually consists of 50 single bars which report ancestral quanta per person, and so forth).

In regards to two technical details, 60,000 SNPs is more than enough to discern these three ancestral elements. But, I do worry a bit about weighting of the various populations in the total sample. I wish that the authors had outputted their results for the HapMap and HGDP groups in the supplements, so we could see the "noise" in the European components. That being said, I am moderately confident that their framework is able to pick up at least small proportions of African ancestry (&lt;5 percent), because the results for Mexicans are almost in perfect alignment with other studies where the details were more transparent (the Mexican results are not shown in the post, but can be found in the paper).

As to the Cuban sample, the N is 50. About 70 percent of these are from in and around New York City, while the rest were from other northern cities. These are not "Miami Cubans." Though the MESA data set has information on how many of the Hispanics identified as white, there was no breakdown for the Cubans. My working assumption is that these are not unrepresentative. This inference is based an an important prior: I have done genomic analysis of two individuals of white Cuban ancestry who had no known African heritage (in fact, one of individuals reported that the family exhibited white racist opinions and outlooks) who yielded clear African ancestry (on the order of ~10 percent for the Cuban lineage). One of these Cubans knew that their ancestry consisted of recent immigrants from Spain, so had no expectation of African ancestry.

Unfortunately, the bar plot above was not reported as a table, so we can't look at the statistics ourselves. But the authors do note "34% of Cubans having greater than 90% Caucasian ancestry, while another 15% of Cubans have less than 50% Caucasian ancestry." It is an interesting coincidence that 15 percent of Cuban Americans do not identify as white (though only ~5 percent identify as Afro-Cubans). But with a sample size of 50 I wouldn't make too much of this congruence. But let's focus on the 1/3 who are 90 percent or more European. You can see from the bar plot that of these 15 or so only one or two come out as pure European. I'm willing to bet these are rare individuals where the whole ancestral lineage was present in Europe in 1900. The most obvious cases are those whose recent maternal and paternal lineages migrated from Spain, but Cuba also has Jews and other non-Iberian European populations. If the MESA data set was public we could investigate these possibilities easily in regards to this population, but to my knowledge it isn't public. So we're left with what the researchers themselves found interesting. 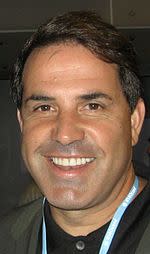 Why does any of this matter? A few years ago CNN anchor Rick Sanchez got fired over some controversial remarks, and basically tried to play the race card. Matthew Yglesias, who is 1/4 Cuban and 3/4 Jewish, pointed out that to all practical purposes Sanchez is just another white guy. Look at him! This is true of most Cuban Americans. And Cuban Americans themselves are highly white-identified, at least within the community. I make the last qualification because it seems clear that some white Hispanics identity-switch when directing arguments at non-Hispanics, because having a non-white background may bolster their credibility in some manner, and there has been a shift toward confounding Hispanic/Latino with non-white in the broader public (despite the explicit fact that Hispanic/Latino is a non-racial category).