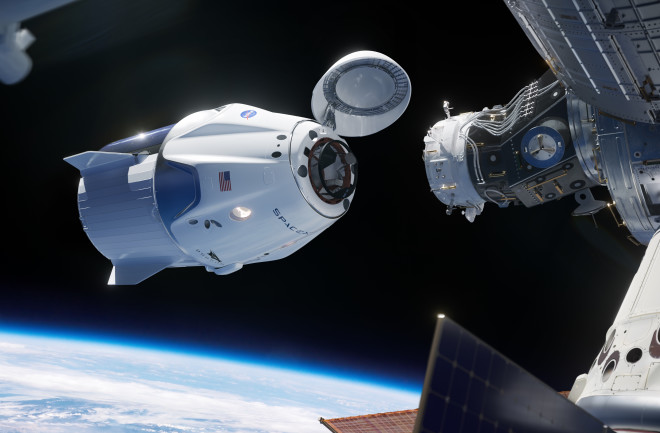 The SpaceX Crew Dragon docks at the International Space Station in this artist’s illustration. (Credit: SpaceX)

Since the end of the space shuttle program in 2011, the U.S. has used Russian Soyuz spacecraft every time it wants to, well, shuttle humans to and from space. While NASA is busy working on its own solution, the agency has increasingly turned to private companies, such as Elon Musk’s SpaceX, to cover its off-planet transportation needs.

Although SpaceX has successfully flown cargo flights for NASA since 2012 via the reusable Dragon spacecraft, the company has yet to launch humans in its so-called Crew Dragon capsule. Originally promised to launch in 2017, the program has seen multiple delays. It is, after all, rocket science, and the path has not been easy.

But this year seemed different. NASA’s Soyuz flights were scheduled to run out by the end of 2019, and SpaceX — as well as competitor Boeing — had scheduled all its final tests to achieve certification in time to pick up where Soyuz left off. On March 2, the Crew Dragon capsule launched on a dry run without crew toward the ISS. It docked, unloaded supplies and splashed back down in the Atlantic Ocean on March 8. The flight, known as Demo-1, went flawlessly.

The next major milestone scheduled was the in-flight abort test, another uncrewed mission meant to test the reliability of the abort system that would save the crew in case of any mishap during launch. The plan was to use the same capsule from the Demo-1 flight. But SpaceX never got the chance.

On April 20, the company ran what was supposed to be a routine test, firing certain rockets with the capsule anchored firmly to ground. Some 100 milliseconds before the engines fired, a leak of oxidizer into a pressurized helium line caused an explosion that completely destroyed the Crew Dragon capsule.

SpaceX spent the rest of spring and early summer figuring out what had gone wrong and scrambling to prep a replacement capsule. While the problem is now solved, and the replacement capsule should be ready soon, the in-flight abort test has yet to happen. This fall, the Demo-2 mission, the first to fly with actual humans on board, was set to launch before the end of the year. It's currently set for early 2020.

[This article originally appeared in print as "The Bumpy Road to Launching a Dragon."]