The Billionaire and the Doomsday Dust-up 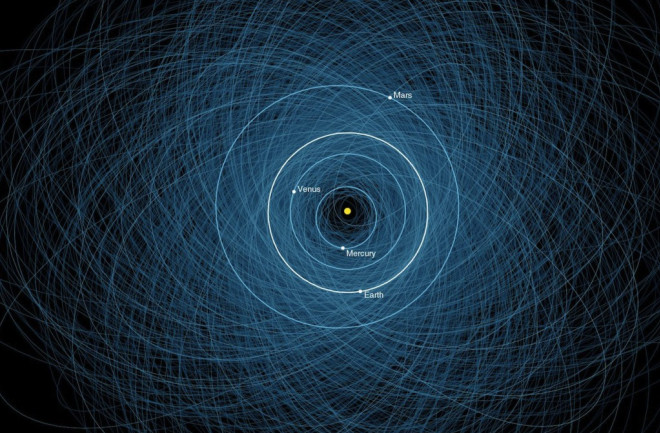 First of all, let me reassure you that this post has nothing at all to do with Donald Trump. The billionaire in question is not the presidential candidate but Nathan Myhrvold, the former chief technology officer at Microsoft. The doomsday I'm talking about is not political but physical. And the dust-up comes down to a contentious but ultimately quantifiable issue: What is the real risk from asteroid impacts?

In a recent paper, Myhrvold charges that NASA scientists have made some serious errors in calculating the size and properties of the asteroids that come dangerously close to our planet. The specific details are fairly technical (you can read a semi-popular summary of his argument here in PDF form), but the upshot is plain enough. If the estimated asteroid sizes are wrong, so are the associated dangers posed by these objects. That would raise a whole new level of uncertainty around a type of natural disaster that is already the subject of highly polarized hype and dismissals.

Despite Myhrvold's impressive credentials, there is good reason to think that he is wrong about NASA's alleged errors. My colleague Phil Plait examined the case thoroughly and emerged unconvinced, to put it mildly. Even if Myhrvold is correct that some of the NASA measurements are more uncertain than commonly indicated, that does not indicate any kind of fraud or deliberate misstatement of the dangers from flying rocks bouncing around the solar system.

Nevertheless, there is a real public good to dragging the issue of asteroid impacts back into the light. It is the kind of low-probability, high-consequence risk that is very difficult to talk about rationally. Popular coverage often tends to greatly overstate the level of danger; on the other hand, some of the mainstream scientific analysis may have yielded risk estimates that are too low. And Myhrvold may be wrong about this particular set of errors, but he is right in the larger sense that we do not know nearly as much as we should about the population of near-Earth asteroids.

On the side of overstated risk, just look at the example of the 325-meter-wide (1,000-foot) asteroid known as 99942 Apophis, which will make a very close approach to Earth in 2029. If you go on Facebook or YouTube you can easily find apocalyptic warnings of what will happen. I won't bother giving links to this kind of nonsense. But even generally respectable sites like Gizmodo have published sloppy, overheated accounts, suggesting that the asteroid might destroy some of our satellites as it whizzes past.

Reality check: No, the 2029 passage of Apophis not at all likely to wipe out your GPS or television transmissions. In fact, the probability of any satellite damage is extremely close to zero, because of the details of Apophis’s trajectory.

According to the current estimates, Apophis will pass at minimum 30,000 kilometers (20,000 miles) away from Earth at closest approach. That will put it within the distance of our geosynchronous satellites, which nominally orbit 35,800 kilometers (22,300 miles) above the surface of the Earth. But—and this is a hugely important but—those satellites all orbit above Earth’s equator. Apophis will be coming in at an angle of 40 degrees relative to the plane of the equator.

When the asteroid is at geosynchronous distance from Earth, it will be at least 3,300 kilometers above our satellites. That is 10,000 times the diameter of the asteroid itself! It will miss by a huge margin. Even if Apophis is surrounded by a small rubble cloud, it will have no effect. Its tiny gravitational pull will have no meaningful effect. The close encounter be a great scientific opportunity to study Apophis and bounce radar off its surface. Earth’s gravity might cause landslides on the asteroid, which would be fascinating to observe. But our satellites are safe, because space is a very big place.

Many of the doomsayers note that there will be another encounter with Apophis in 2036. Before the asteroid’s last pass in 2013, there was a modest concern that the 2029 encounter could shift its orbit onto a more dangerous path (that it would pass through the so-called “keyhole”). Now it looks like Apophis will miss Earth by about 20 million kilometers in 2036. Looking at all of the future encounters going out to the year 2105, NASA now estimates that the total cumulative chance of impact with Earth is less than 1 in 100,000. No other encounter in the foreseeable future will bring Apophis even nearly back within range of our satellites.

Over a 20-year period, various U.S. satellites and ground sensors detected 556 significant aerial asteroid impacts, or bolides. The size of the dots indicates the amount of energy released in gigajoules; 1 GJ is equivalent to 5 tons of TNT. Chelyabinsk is marked by the large yellow dot over western Siberia. (Credit: Planetary Science/NASA)

If all that debunking has you feeling good, time for a different kind of reality check. The 2013 Chelyabinsk meteor in Siberia, which caused more than 1,000 injuries, inspired researchers to recalculate both the frequency and the destructive power of small impacts. Here the news is not so happy.

You might say that Myhrvold had the right idea, but had his eye on the wrong end of the risk spectrum. The issue is not big, extinction-level impacts; the kind of asteroids that can create that level of mayhem are big (around 10 kilometers wide), bright, easy to see, and easy to track. If we are slightly wrong about their size--who cares? The crucial thing is that we would know about the impending arrival of such a large object centuries ahead of time, and we can already say with high certainty that there is no such object headed our way in the foreseeable future.

The Chelyabinsk incident was triggered by something far smaller, a rock perhaps 20 meters wide. Based on the latest studies, such little guys are both more common and more destructive than previous understood. "Little" is also a relative term; the Chelyabinsk blast was equivalent to a 500-kiloton bomb. There may be 20 million such objects orbiting near the Earth, swarming like space locusts. Fewer than 1,000 have been catalogued.

In that sense, Myhrvold is completely on target. We really do have a big gap in our asteroid knowledge. Studies of atmospheric bursts are providing data on the frequency of even smaller impacts, but the statistics for Chelyabinsk-level events are still full of uncertainty. Finding and tracking all of the 20-meter-class rocks in the inner solar system is not a practical job. But as the Russians learned the hard way, such overlooked objects can be as dangerous as earthquakes or tornadoes.

Fortunately, we don't need to be able to catalog them all. For asteroids of this size, we are talking about a danger at the level of other familiar natural hazards, not all-out doomsdays. Chelyabinsk-scale rocks may be too small to show up on a billionaire's radar, but it also does not require the resources of a billionaire to deal with them. More about that in my next column.