The Best of Voyager: The Longest-Running Space Mission in History 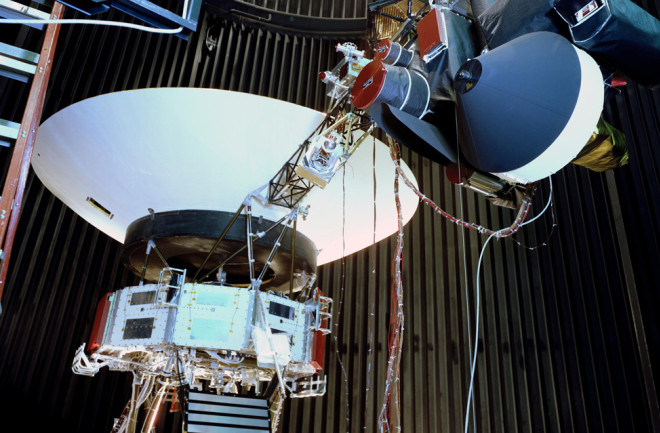 When NASA launched Voyager 1 and Voyager 2 in the summer of 1977, its engineers were sending the spacecraft on specific missions. Originally, the space agency tasked the Voyagers with conducting close-up studies of Jupiter and Saturn. They would compile data on magnetic fields, the Sun’s influence, Saturn’s rings, a few large moons, and send back lots of great images. To accomplish all this, engineers built into them a generous (for the 1970s) five-year lifetime.

At Jupiter, and then Saturn, the mission achieved far more than its original objectives. Then came the big news: By carefully tweaking Voyager 2’s flight path, flybys of Uranus and Neptune were possible.

The two-planet addition became the Grand Tour. The projected lifetimes stretched to 12 years for the Neptune encounter August 24, 1989. And that date would, in turn, become early history. As of 2018, both Voyagers have finished their fourth decade of operation — and they show no signs of stopping.

One Surprise After Another

The Voyager spacecraft made enough discoveries to fill this magazine — and we did just that for our October 2017 issue — but most scientists would view the following as the top 10.

As Voyager 1 flew by the jovian moon Io, it captured this image of an active plume (left edge, bluish white) coming from Loki, a volcano then on Io’s limb, from 340,000 miles (490,000 km) away. The dark heart-shaped feature near the bottom shows fallout deposits from the active plume Pele. (Credit: NASA/JPL/USGS)

1) Volcanoes on Jupiter’s moon Io. This was the biggie. While processing a Voyager 1 image, navigation engineer Linda Morabito discovered a feature along Io’s edge. What she initially thought was a moon turned out to be a plume from an active volcano. Planetary geologists subsequently learned Io’s interior is in turmoil: Jupiter’s gravity stretches it differently depending on how far the moon is from the planet. Such an interaction creates intense heating due to friction. The result is that Io has 100 times as much volcanic activity as Earth.

2) Jupiter’s turbulent atmosphere. After watching the giant planet’s cloud bands and Great Red Spot from afar for three centuries, scientists got their first up-close look with Voyager 1. They saw dozens of interacting hurricanes, some as large as planets. And the Red Spot itself displays layers of complex activity. It lies 5 miles (8 kilometers) above the surrounding clouds, and time-lapse movies confirmed its counterclockwise rotation.

The Great Red Spot is a spinning anti-cyclone in Jupiter’s southern hemisphere. At the time Voyager 1 snapped this close-up of swirling clouds, the Great Red Spot was three and a half times the size of Earth. (Credit: NASA/Goddard Space Flight Center)

3) An ocean within Europa? As the two spacecraft flew by the fourth-largest jovian moon, its icy crust showed a dizzying series of intersecting cracks. Calculations indicated the possibility of a liquid ocean deep beneath the ice. Such a feature likely exists because of the tidal interaction between the moon and Jupiter. But Europa’s orbit is closer to circular than Io’s, so the internal heating isn’t enough to create volcanoes — just enough to melt vast quantities of ice.

Voyager 2 revealed Europa’s surface to be devoid of mountains or craters as the spacecraft flew by the jovian satellite July 9, 1979. The main feature it did show was a network of crisscrossing streaks. The lines are where warmer ice broke through the colder surface when tidal forces from Jupiter and its other large moons cracked the outer layer of the moon. (Credit: NASA/JPL/Ted Stryk)

4) The Io torus. Voyager 1 found a thick ring of ionized sulfur and oxygen shed by Io that inflates Jupiter’s giant magnetic field. The material originates within the moon’s volcanoes, some of which are so powerful that they erupt it directly into space.

5) Saturn’s ring structure. Before 1980, astronomers recognized fewer than six rings around Saturn. But Voyagers’ cameras showed that each ring had numerous subdivisions. In addition, Voyager 1 discovered that the enigmatic F ring has two small “shepherding” satellites, Pandora and Prometheus, whose gravity keeps the ring in place.

6) Titan’s atmosphere. Voyager 1 showed that Titan has a nitrogen atmosphere with a surface pressure 45 percent greater than on Earth. Voyager data hinted at the possibility (later confirmed) that this satellite experiences clouds of methane and other hydrocarbons, and that rain falling from those clouds creates lakes of liquid methane on the surface.

8) Neptune’s supersonic winds. The discovery of the fastest winds in the solar system in the atmosphere of the most distant planet was a stunner. Voyager 2 measured wind speeds of 1,100 mph (1,600 km/h) above Neptune. Because the planet radiates 2.6 times as much energy as it receives from the Sun, researchers think the decay of radioactive elements deep within Neptune powers the currents.

Voyager 2 took this global color mosaic of Triton, Neptune’s largest moon. It is one of only three objects in the solar system with an atmosphere of mainly nitrogen. (The others are Earth and Titan.) But this moon is so cold (–391 degrees Fahrenheit) that most of the nitrogen has condensed on the surface as frost. (Credit: NASA/JPL/USGS)

9) Geysers on Triton. In addition to observing clouds and hazes in the thin atmosphere of Neptune’s largest satellite, Voyager 2 found evidence of cryovolcanoes — otherwise known as ice volcanoes. These active geysers within the moon’s southern polar cap spew dust-laden nitrogen up to 5 miles (8 km) above the surface, which lies in perpetual cold at a temperature of 37 kelvins (–393 degrees Fahrenheit).

10) The edge of the solar system. The Voyager spacecraft didn’t stop working after their planetary encounters. In 2014, Voyager 1 passed an important boundary within our solar system called the heliopause. This is where the strength of the solar wind isn’t powerful enough to overcome the stellar winds of nearby stars. Voyager 1 crossed another border, the termination shock, where the solar wind abruptly slows to subsonic speed, back in 2004. Voyager 2 followed in 2007. As each spacecraft crossed the heliopause, their Voyager Interstellar Mission commenced.

As of February 8, 2018, Voyagers 1 and 2 are 13.16 billion miles (21.18 billion km) and 10.91 billion miles (17.56 billion km) from Earth, respectively. And the craft are still making news. In 2011, Voyager 1 crossed into a zone astronomers call the stagnation region. There, at the boundary of interstellar space, the solar wind is less intense, but the magnetic field measures twice as strong.

Both spacecraft continue to study ultraviolet sources among the stars and the boundary between the Sun’s influence and interstellar space. Communications will be maintained until the Voyagers’ power sources no longer can run critical subsystems.

A Legacy of Discovery

The grand tour of the solar system (and beyond) continues. The primary explorers are two workmanlike spacecraft that achieved the goals scientists set before them, far surpassed their planned life spans, and adapted to new expectations by evolving technologically. Indeed, more than 40 years after their launches, Voyager 1 and Voyager 2 continue to go where no one has gone before.