The Benefits of Well-Rested Produce 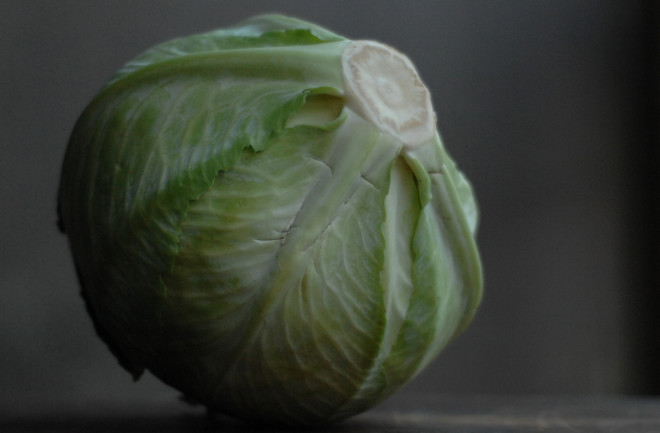 Beauty rest isn’t just for people—cabbages also benefit from a good night’s sleep. (photobear/Flickr) In 400 BCE, the Greek admiral Androsthenes wrote* of a tree that

“opens together with the rising sun . . . and closes for the night. And the country-dwellers say that it goes to sleep.”

Over the next 2,000 years, researchers discovered that the daily cycles first observed by Androsthenes fall into 24-hour periods similar to our own cycles of waking and sleeping [1].

In plants, these circadian rhythms help control everything from the time a plant flowers to its ability to adapt to cold weather [2]. Plants can even use their internal clocks to do arithmetic calculations to budget their energy supplies through the night [3].

But what happens when part of a plant is harvested for food? In a recent study, researchers at Rice University and UC Davis showed that cabbages can exhibit circadian rhythms as long as a week after harvest. As with any plant, cabbages experience circadian rhythms while growing out in the field; however, cabbages stuck in the constant dark of a delivery truck or light of a 24-hour grocery store will inevitably lose their sense of time.

Like travelers adjusting to a new time zone, cabbages deprived of cyclic light conditions suffer a severe bout of veggie jet lag. And just as travelers overcome jet lag by readjusting their sleep cycles, cabbages can “re-entrain” their circadian rhythms by being exposed to cyclic light conditions. This also works with spinach, zucchini, sweet potato, carrots, and blueberries, suggesting that post-harvest circadian rhythms are a general characteristic of many, if not all, fruits and vegetables.

The ability to re-entrain circadian rhythms in produce presents an intriguing new way to improve the palatability and even nutrition of our fruits and vegetables. In the wild, circadian rhythms can help plants defend themselves against hungry herbivores. The researchers showed that cabbages with re-entrained circadian rhythms use a similar mechanism to avoid becoming an afternoon snack for plant-eating larvae—with less damage from hungry larvae, re-entrained cabbages appear fresher and tastier than cabbages kept under constant light or dark conditions.

Cabbages fight off larvae and other pests thanks to molecules called glucosinolates. Any cabbage can produce these molecules, but re-entrained cabbages produce glucosinolates in sync with their circadian rhythms. Because larvae also experience circadian rhythms, re-entrained cabbages get an extra boost of molecular larvae-fighting power just when they need it the most.

While glucosinolates are bad news for larvae, they have valuable anti-cancer properties when consumed by humans. In fact, the very molecules that plants create to defend themselves against their environment are often beneficial for our own health. Future research will show whether such phytonutrients in other types of produce can also be reconditioned to accumulate in predictable 24-hour cycles.

Taking advantage of circadian rhythms in fresh produce could then give us more control over the way phytonutrients accumulate over time, helping us maximize the nutritional benefits of our fruits and vegetables. Improving the nutrition of our food could be as simple as giving our produce a good night’s sleep.

*The original Greek passage comes from Botanische forschungen des Alexanderzuges[4] with a very special thank you to Tovah Keynton for the English translation. The drawings (also from Botanische) depict the tree leaves transitioning into and then assuming their “sleeping position.”

About the author: Liz Roth-Johnson is a Ph.D. candidate in Molecular Biology at UCLA. If she’s not in the lab, you can usually find her experimenting in the kitchen. Read more by Liz Roth-Johnson