Scientists double down on an X-ray laser that can re-create a star’s interior and catch photosynthesis in action. 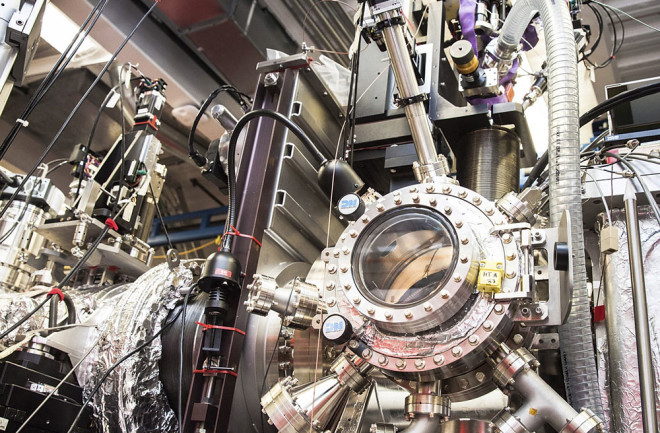 In the summer of 2010, Oxford University physicist Justin Wark flew to Northern California to study the interiors of stars. The instrument he sought there was not a telescope, but rather a new kind of laser, more than 3,500 feet long and capable of emitting X-rays a billion times brighter than anything ever generated on Earth. It was worth the airfare. In the 60 hours he spent bombarding metal foils with X-rays — creating analogs to stellar plasma, or ionized gas — Wark pulled more data than he had from any single experiment in a quarter century.

It was remarkable that the machine worked at all; nobody had ever made this kind of laser at any scale. Everything about the enormous Linac Coherent Light Source (LCLS) was a gamble, says LCLS Director Mike Dunne.

In the 1960s, Stanford University and the U.S. Department of Energy constructed the longest linear particle accelerator in the world. The Stanford Linear Accelerator (SLAC) collided electrons and other particles at nearly lightspeed, allowing physicists to make Nobel Prize-winning discoveries about the quark, an elementary particle.

But by the turn of the millennium, more powerful machines existed, and the accelerator was essentially obsolete. “If nothing else had changed, the system would just have been shut down,” Dunne says, “but alongside that came an idea, a speculation almost.”

Scientists thought particle accelerators might be repurposed to churn out X-rays in a way that would behave like a laser — a light beam made by exciting atoms. And that laserlike behavior, the speculation went, could create a tool for observing matter in unprecedented atomic detail.

The plan was relatively straightforward. Researchers would fire the accelerator’s speeding electrons through an undulator — a contraption to make them zigzag — and their undulations would emit high-energy radiation in the form of X-rays. The big question was whether the waves of those X-rays could align, which is a must for making “coherent” laser light. Theory said yes, and the U.S. Department of Energy bet half a billion dollars on it. The results, according to Dunne, were “beyond everybody’s expectations.”

Wark’s work on LCLS shows what’s possible. “I’m interested in generating and diagnosing extreme states of matter,” he says. The X-ray laser not only re-creates the extreme temperatures and pressures inside stars and planets, but also images their atomic structure. With LCLS, the laser pulses 120 times per second, and each pulse lasts as little as one-hundredth of a trillionth of a second. By stringing those X-ray snapshots together, “you can make a little movie of what’s going on,” Wark explains. That movie-making potential also appeals to researchers studying chemical reactions in fuels, for instance, or how electrons behave in superconducting materials.

LCLS has even helped scientists understand photosynthesis, where the chemical reactions for turning sunlight into energy are fast and unpredictable. Crucially, LCLS works without freezing the plant samples — a necessity with some other instruments. So scientists know what they’re seeing is closer to natural conditions, according to Junko Yano, who researches photosynthesis at Lawrence Berkeley National Laboratory.

Scientists say LCLS was such a complex system that it needed experts from diverse fields all working together to make its experiments possible. And that interdisciplinary approach is still strong. Yano’s team, for example, includes researchers in fields that might otherwise never talk to each other, from biologists to physicists, as well as chemists, engineers and computer scientists.

On the strength of these collaborations — and new findings in areas ranging from photosynthesis to stellar physics — the Department of Energy doubled down last year with $1 billion of additional funding for a more advanced X-ray laser in another segment of the old SLAC tunnel. Super-powered with a superconducting accelerator, LCLS-II should start making X-rays in 2020.

LCLS-II may need an even greater interplay of expertise. The new superconducting accelerator will make the upcoming laser 8,000 times faster and 10,000 times brighter than LCLS, requiring major innovation in X-ray detectors, data processing and analysis. “We have to have them all come together simultaneously,” Dunne notes. “By pure serendipity, we think they can converge on the timescale that LCLS-II will turn on.”

He doesn’t sound especially worried. It’s just another big bet on a machine with a winning streak any gambler would envy.

[This article originally appeared in print as "The Atomic Movie Machine."]