The Ancient Fish That Got Cold Feet and Returned to Water

An analysis of fossil remains reveals a species of ancient “fishapod” that transitioned to land only to return to the water. 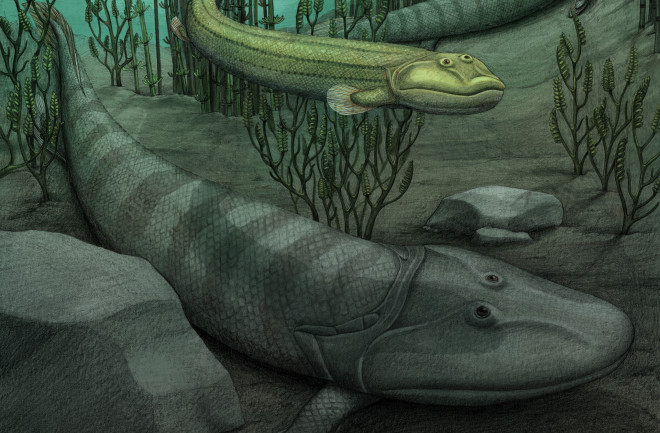 Illustration of Qikiqtania wakei in the water with its larger cousin, Tiktaalik roseae. (Credit: Alex Boersma/Nature)

Life on land isn’t for everyone. Approximately 375 million years ago, the famous “fishapod” Tiktaalik roseae first emerged from the water and explored the shore. At the same time, one of the species’ older relatives attempted a similar transition, only to turn tail and return to its former aquatic lifestyle.

This finding, recently reported in Nature, further clarifies the complicated transformation of fish into four-legged, land-living tetrapods and emphasizes that evolution isn’t always a linear process.

The finding of the fossilized remains of Tiktaalik in 2004 marked one of the most important moments in paleontology, inspiring a flux of investigations into the evolution of fins into limbs many millions of years ago. Now, a team of paleontologists studying fossils from the same archeological site that yielded Tiktaalik have identified a new species of “fishapod” similar to the first, this time with features well suited to swimming. These features, the paleontologists say, suggest that the species’ ventures onto land were somewhat short lived.

The discovery of the species, which the team has named Qikiqtania wakei, helps explain the early evolution of tetrapods. It also stresses that evolution is not a single, straight progression, but a winding path, filled with twists, turns and detours that don’t always show adaptive successes.

“Tiktaalik is often treated as a transitional animal because it’s easy to see the stepwise pattern of changes from life in the water to life on land. But we know that, in evolution, things aren’t always so simple,” says Tom Stewart, a study author and a professor of biology at Penn State University, in a press release. “It’s more than simple transformation with just a limited number of species.”

Paleontologists found Qikiqtania at around the same time and in the same area as they found Tiktaalik, at a site on Ellesmere Island in the Canadian territory of Nunavut. Stumbling across several sediments with scales across their surface, the paleontologists gathered the specimens and took them to their labs. But, as the researchers concentrated their attention on their analysis of Tiktaalik, the smaller Qikiqtania fossils remained unanalyzed in storage. That is, until now.

“At first we thought it could be a juvenile Tiktaalik, because it was smaller,” says Neil Shubin, a study author and a professor of biology and anatomy at the University of Chicago, in a press release. “But the humerus is smooth and boomerang shaped, and it doesn’t have the elements that would support it pushing up on land. It’s remarkably different and suggests something new.”

Qikiqtania’s humerus, the paleontologists say, lack the typical indicators of bones built for walking. Instead, their smooth surface and bowed shape seem suggestive of an aquatic lifestyle, causing the team to conclude that Qikiqtania abandoned its short stint on land. “That’s what blew our minds,” says Shubin, who was also involved in the discovery and description of Tiktaalik in 2004.