That Time Apollo Astronauts Detonated Explosives on the Moon 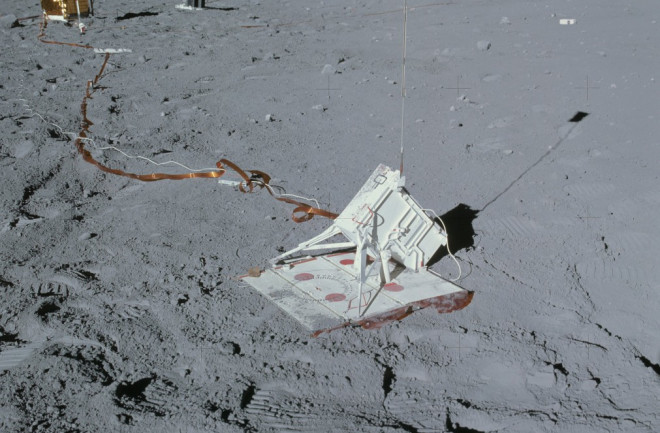 The mortar launcher set up by Apollo 16 astronauts in 1972. The launcher is in the foreground an other experiments can be seen in the background. NASA

Apollo astronauts did a lot when they made it to the moon in the 1960s and 70s. They drove cars, they hit golf balls, they planted flags, they ran experiments and they launched mortars … wait, what? Yes, those NASA astronauts not only brought mortars and explosives to the Moon, they used them during Apollo 16 and 17 stays on the lunar surface. However, before you think we were testing military defenses in case of alien (or Russian) incursion, these explosions were all in the name of science.

So, why on Earth did they need explosives on the Moon? It was all about discovering the structure of the Moon’s interior. We know the layers of the Earth — the crust, mantle and core — mostly through understanding how seismic waves move through our planet. The seismic waves (p- and s-waves, defined by the style of motion of the wave) move at different speeds through different types of material. In some cases, they can’t move through them at all, like how s-waves can’t pass through the Earth’s liquid outer core.

By measuring changes in the expected arrival time of seismic waves, we can determine the structure of our planet’s interior (called “seismic imaging” or “seismic tomography“). Now, you can gather this data one of two ways: First is “passive seismic“, where seismometers are set up and they record seismic wave information from large, distant earthquakes that are always happened on Earth; the other is “active seismic” where humans make their own seismic waves by doing things like dropping heavy weights on the ground (“thumping”) or setting off small explosions in the ground or in water. Then, seismometers or geophones record the return time of the seismic waves just created as they reflect (or don’t reflect) off of different materials.

As it turns out, the Moon is a pretty seismically-quiet object. The seismometers set up on the Moon to detect “Moonquakes” didn’t detect too much, apart from a few thousand deep earthquakes and only 3 with estimated magnitudes of over M5 over 8 years. On Earth, we have multiple M5 earthquakes per week.  So the Moon doesn’t provide a lot of “passive” seismic fodder. The seismometers that were set up on the Moon also detect things like natural impacts (meteorites) and artificial impacts (parts of spacecraft). Even so, the natural Moonquakes did allow geologists to map out the interior of the Moon, proving it has a solid metal inner core and thin liquid outer core, both of which are proportionally smaller than the Earth’s.

However, to get details about lunar subsurface structure, geologists needed more than just natural Moonquakes. That’s where the “active” seismic comes in. For the Apollo missions, a system was developed to set off small explosions directly into the ground to produce a “thump”. Then, geophones set up in a line on the Moon’s surface picked up information about the waves. Nineteen thumper explosions were set off by Apollo astronauts to help map the ground beneath the experiments set up near the lunar module.

However, we need to generate large explosions so we can “image” deeper into the lunar subsurface. To that end, a mortar was brought to the Moon by both Apollo 14 and 16 to fire rocket-propelled grenades over a kilometers from a seismic station set up by the astronauts (see below). The idea was to launch the mortar along an array of geophones to record the blasts and their resultant seismic waves and reflections over a wider area than the “thumper”. Three of these mortars that ranged between 775-1024 g explosives were launched during the Apollo 16 mission.

A diagram showing the Apollo 16 active seismic experiments, including the array of geophones and the mortar. NASA

A diagram showing the Apollo 16 active seismic experiments, including the array of geophones and the mortar. NASA

Now, before you picture astronauts lobbing explosives, the mortar was radio-controlled, so they were actually launched after the astronauts left the lunar surface. These experiments found that billions of years of bombardment from space (and now humans) have left the upper few hundred meters of the Moon’s subsurface a shattered mess of rocks (called a breccia) much deeper than we anticipated. (The mortars of Apollo 14 were never launched because it was determined they might have damaged other experiments set up.)

During Apollo 17 (the only mission with a geologist on the crew), a simpler system was used. Explosive charges were deployed up to 3.5 kilometers from the lander during the excursions on the lunar buggy. Instead of radio-controlled explosives, these were charges set off by a thermal timer after pins were pulled (however, the timers were set for days, not minutes … no dramatic, Armageddon-like situation). In this, the largest of the lunar seismic experiments, we found that the basalt layer at the surface near the landing site was ~1.4 kilometers thick (and that’s a lot of basaltic lava!)

Astronauts setting out the explosive charges for the Apollo 17 lunar seismic profiling experiment in late 1972. NASA

Astronauts setting out the explosive charges for the Apollo 17 lunar seismic profiling experiment in late 1972. NASA

So, thanks to some judicious use of mortars and explosives, we know much more about the structure of the Moon’s subsurface … at least in a few places. There haven’t been any more active seismic experiments on the Moon since the Apollo missions and there are no plans to try this on any other planetary body (although the Mars 2020 rover has a ground penetrating radar). Until then, somebody can write that script where astronauts reuse the 1960’s mortar launchers to fight off some alien invaders.