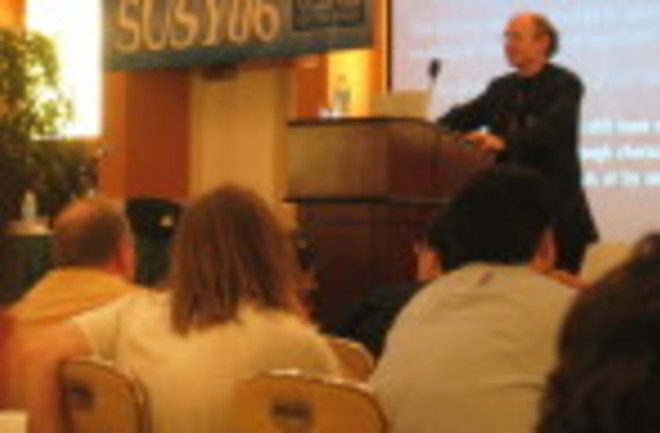 Well, Wednesday night at the SUSY06 conference featured presentations by Frank Wilczek, Lenny Susskind, Andre Linde, and Burt Richter, and ended with a panel discussion. Slides and notes can be found here. It was about "Naturalness", and -among other aspects of naturalness- featured a lot of discussion about the Landscape scenario, and the use of Anthropic arguments in fundamental physics. The first three speakers gave excellent presentations of their points of view on the topics, each using Anthropicity (is there such a word?) to varying degrees. You've possibly read about the nature of the discussion (especially as it pertains to what some researchers in string theory are pursuing) in an earlier post of mine (see the comments, especially).

People get very passionate (understandably) about the whole topic, although the strangest thing about it to me is the way so many people seem to want everyone in the field to "choose sides", as though this is some sort of war for the future of physics. It is not a war. It is an interesting and important discussion that will simply fade away in due course, when other interesting and more urgent discussions take its place. New experimental results and new understanding of theory will inevitably help make this happen. This is the way it should be with all discussions in science, of course, and this is no different.

I was wishing I could get across to you the nature of the discussion that took place on Wednesday, because it was interesting -with good points made on both sides- and because all four characters are so engaging and entertaining in their own ways. Here's one aspect I particularly loved: At one point everyone in the audience seemed sort of in the thrall of the whole Anthropic view after three excellent talks about it, only to have the bubble burst and splatter everywhere when Burt Richter got up and, speaking from notes with no slides, just declared the whole thing to be a theological discussion. Laughter erupted along with a round of applause! This was -I think- not because everyone agreed with him (he later refined his criticisms to make more productive points), but because it was such a great slap-in-the-face reawakening after about two hours of the other view. It was basically a loud fart in a quiet cathedral, during evensong. Excellent. The great news is that some of the panel discussion was recorded, and can be found here [see update 2, below] (thanks chimpanzee; shot of panel borrowed from that site too).

There, you can see some of the friction and heat of the discussion on the video. So have a look at it (it is interesting and informative to see the bigshots arguing -and how they argue- even if you're not working in this field), and then, sure, come back here and let's have a polite shouting match about the landscape if you like. It's been awhile since we've gone over this and maybe there's some new ideas to be added... and new research to discuss. The usual rules about stepping away from the temptation to make personal attacks apply. -cvj [Update 1: Peter Woit has written about Burt Richter's remarks on his blog, using the transcripts of Richter's notes as a guide. I note that during the panel discussion itself, Richter was able to shape and focus his remarks considerably, making criticisms of specific "Naturalness" ideas while being more accepting of others. There was some useful give-and-take during the discussion, in other words, which the transcripts of his talk don't betray. You can see a little bit of that in the video clip, which is unfortuantely incomplete. See also the first part of my comment addressed to Peter.] [Update 2: The complete panel discussion has now been uploaded and can be found here. Warning: It is a 300Mb file.]