Scientists have discovered what fuels the high-energy X-rays bursting from Tycho's supernova. 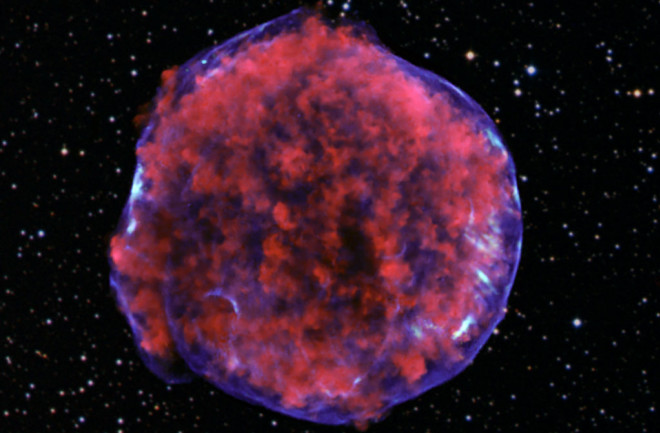 Tycho’s supernova remnant is all that’s left of an exploded white dwarf. It still glows in both high-energy (blue) and low-energy (red) X-rays. | Chandra X-ray Observatory/NASA

Astronomer Tycho Brahe knew the position of nearly every star in the sky. But strolling home one November night in 1572, he saw a strange new light. The stella nova, modern astronomers now know, was actually a supernova. After 450 years, its remnant has faded like a firework and no longer glows visibly. Thanks to a secret energy source, though, it still shines in X-rays nearly as bright as it did in its youth.

When a massive star explodes, the spray of stardust collides with interstellar gas, forming an outgoing shock wave. The wave heats its surroundings billions of degrees, leaving a blazingly bright wake. Within months, the low-energy visible light dims as the plasma spreads and cools.

The high-energy X-rays should peter out, too. But, as what’s now called Tycho’s supernova remnant demonstrates, something still fuels the radiation fire hundreds of years after its energy should have been drained.

Astronomers had theorized but never witnessed this remnant-stoking until last November, when Hiroya Yamaguchi of the Harvard-Smithsonian Center for Astrophysics discovered a bizarre signature in the remnant’s X-rays: Cool iron atoms clustered inside a ring of their fevered ferrous cousins. When the supernova explosion first slammed into cold interstellar gas, Yamaguchi realized, that jolt had created not one but two shock waves: one continuing out into space, and the other a backlash.

This second wave is traveling back toward the now-dead star at 1,000 times the speed of sound, superheating iron atoms as it goes. It’s this superfast superheating of the iron that causes the emission of X-ray radiation. “We knew this process had to happen,” says Yamaguchi’s collaborator Randall Smith, “but we’d never actually seen it before. We didn’t know how it worked, or where, or when.”

The reverse shock wave will continue to superheat the cool iron atoms, eventually reaching the remnant’s core sometime in the next few hundred years. By then, X-ray-detecting goggles may enable an astronomer, ambling home one evening, to look skyward and see the death glow of the same supernova Brahe observed in its infancy.