Submarine Eruption in the Black Sea off Georgia Not Likely 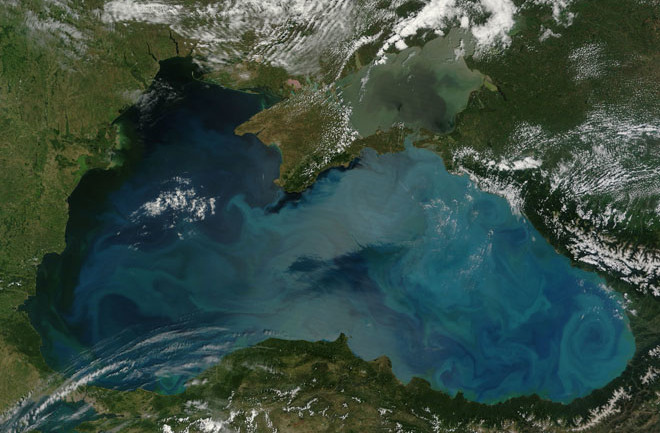 MODIS Image of a phytoplankton bloom in the Black Sea, taken June 3, 2012. The supposed submarine eruption off Georgia would be on the far right of the sea. Image: NASA Goddard / Flickr Sometimes I run across news I have no idea how to tackle. This article in Earthweek was just such a piece of news-- not because it was poorly written or reported, but rather the news just didn't make sense. In this article, it is stated rather matter-of-factly that an undersea cable in the Black Sea between Poti in Georgia and Sochi in Russia had been severed by a submarine lava flow. The Earthweek article is short, so I dug around some more and sure enough, another news source claimed the same thing, with a quote from Kote Samushia, CEO of the cable-owner company: "I think that this should be the eruption of an underwater volcano." Why did Samushia made this conjecture? Because the outer covering of the cable was melted in a number of places. Beyond this, we don't have any information. Can we try to make sense out of this surprising news? Now, I bring this up not because I think that an eruption occurred, but to give you an idea of the "smell test" with news like this. The Black Sea isn't exactly a place where you would expect to have a volcanic eruption. If you check out the rudimentary map in the Earthweek article, we can get an idea of where this "eruption" supposedly occurred - offshore of Georgia in the Black Sea, maybe off the coast of the Georgia province of Abkahazia. Using that as a rough location, I took a look at the known active volcanoes in the region. There are actually quite a few volcanoes that have potentially erupted in the Holocene in Georgia, Russia and Armenia, all associated with the Caucasus Mountains. However, even the closest to the area -- Elbrus -- is over 135 km away. After that, the Kabargin-Oth Group is over 220 km and an unnamed cluster of cinder cones in Georgia is 230 km away. All of these volcanoes are far to the east of the supposed submarine eruption. Now, the tectonics of the Black Sea are, in a word, complicated. There are multiple colllisional belts going in different directions throughout the region, throwing the Caucasus Mountains up along the Russian-Georgia border. I'm not going to get into the details, but much of the volcanism is related to these collisional belts. However, much of the Black Sea basin is bounded by passive margins, where no active tectonism is occurring -- not exactly the sort of place that a submarine volcanic eruption would occur. So, active volcanoes are far away from the supposed eruption location and the tectonics of the region don't support the idea that an eruption would occur off the western coast of Georgia. There were two moderate earthquakes off of Georgia in late December, a M5.2 (12/25) and M5.7 (12/23), both a relatively shallow depths (~10 km). However, they were both strike-slip earthquakes, not the extensional earthquakes you should expect with magma moving through the crust. We're left with no evidence beyond some melted cable that an eruption occurred. Now, I don't know what really happened off of the Georgian coast -- maybe the earthquakes in late December triggered some submarine landslides that severed the cables. Why there were visible signs of fire are beyond me -- especially with the supposed explanation of a submarine lava flow, you wouldn't expect much fire and especially wouldn't expect it to neatly sever the cable. However, I think we can safely say that the chances of this being a submarine eruption in the Black Sea are infinitesimally low. Just another cautionary tale of not believing what you read in the news with checking for yourself, especially if it seems incredible/unexpected. UPDATE 11:45 AM 1/11/13: Adam Forte, who works in this region, left a great comment suggesting it could be a mud volcano that ignited hydrocarbons/methane. No evidence, but a great idea for what might be actually happening.