(Video courtesy of Dr. Boris Behncke, INGV - Osservatorio Etneo). Much of last week, we were focused on the activity at Italy's Etna. The week ended with some lava flows creeping down the volcano and, for a day, things had settled down. Well, little did we know that Etna was actually just warming up. During the night of Feb. 23 (Saturday), the volcano unleashed a remarkable explosive volley, producing lava fountains that towered 800 meters over the crater on the southeast slopes of the volcano. Video taken by Dr. Boris Behncke of the Osservatorio Etneo (above) shows just how powerful the eruption was, with the pulsing and roaring of the lava as it was explosively thrown from the vent near the new Southeast Crater. Let's try to put a 800-meter lava fountain into some perspective. 800 meters is ~2,624 feet. The height of the Empire State Building in New York is ~1,250 feet (roof height -- add the tower and its ~1,454 feet). So, lava was fountaining from the crater on Etna as high as almost two Empire State Buildings on Saturday night (see image below). 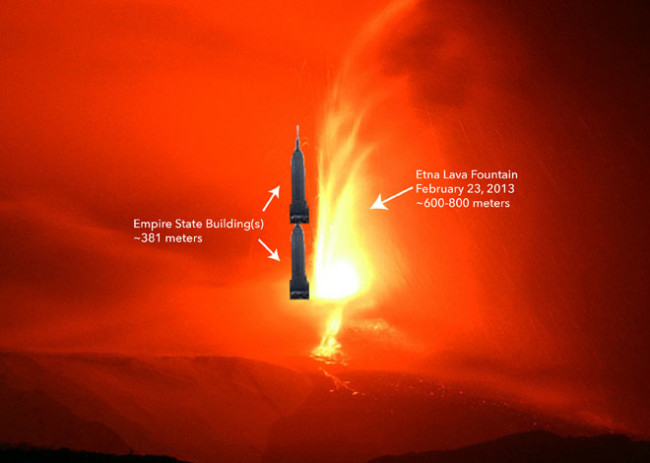 The lava fountain from Etna on Feb. 23, 2013 -- I've added two stacked Empire State Buildings to give a sense of perspective. Original image: Dr. Boris Behncke / Flickr. Now, the factors that go into the height of a lava fountain include the magma supply rate (how much magma is being fed into conduit to erupt), the gas content of the magma -- the higher the gas content, the more explosive the eruption will be, and the geometry of the crater. This eruption of Etna likely had a high rate of magma supplied to the vent and relatively high gas content to produce such a lava fountain. However, it isn't even close to the record for tall lava fountains. The record for historic (and confirmed) lava fountain height is the 1986 eruption of Izu-Oshima in Japan that topped out at ~1,600 meters*. When Tarawera erupted in 1886, the lava fountains in that basaltic eruption were estimated to be as tall as 2,000 meters (2 kilometers) -- that's ~6,561 feet or 5.25 Empire State Buildings worth of lava fountain. The eruption of Tarawera did not have any geologists to accurately measure the height of the fountain, so the 2,000 meters height is based on local people's recollection of the eruption. However, 2,000 meters isn't unreasonable based on the eruptive rate and gas content of the Tarawera basalt. To take it even higher, the lava fountains from the 1779 eruption of Vesuvius were thought to have reached 3 kilometers (9,800 feet)! *UPDATE: Boris Behncke (INGV) said in the comments below that Etna had a 2,000 meter fountain in 1999, so maybe the records of historic lava fountains need to be updated. By Sunday morning, the new cone built by Saturday night's (and earlier in the week) lava fountains** was clearly visible -- a dark, black cone of volcanic debris starkly contrasted against the white mountain snows (see below). It is remarkable to see how quickly these volcano features can grow during these periods of intense activity. Lava flows are still snaking down the volcano as well -- so it seems like Etna's February is still going strong. **UPDATE: Boris also mentioned that this cone has been built over the course of the last 2 years, rather than merely the last few weeks activity -- still an impressive cone for a few years growth. 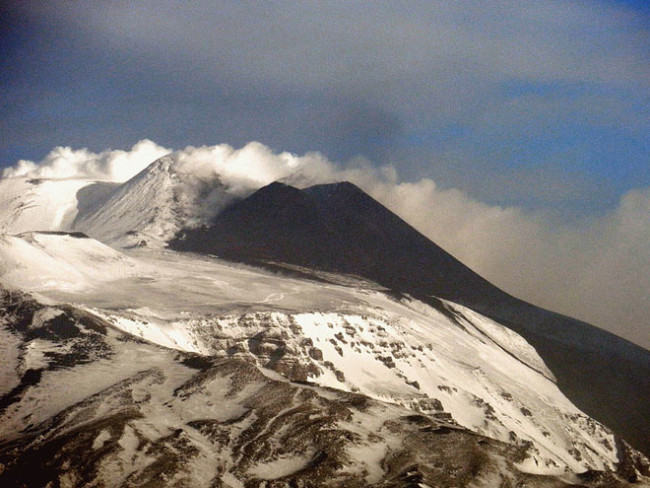 The new cone on the southeast flank of Etna after repeated paroxysms the week of February 18, 2013. Image: Dr. Boris Behncke / Flickr